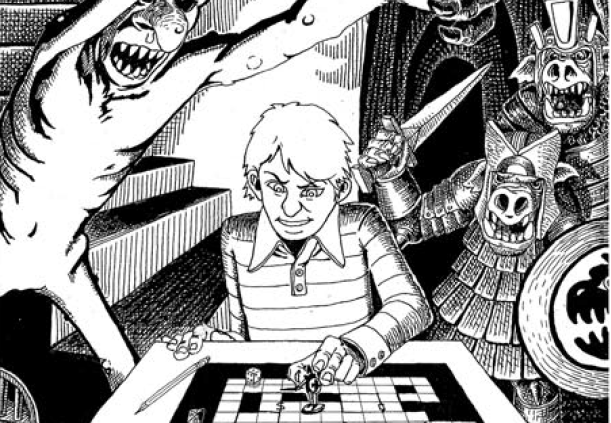 Recently one of my coworkers said to me “the last five minutes of that meeting I was just in devolved into a discussion about Dungeons and Dragons and I had no idea what they were talking about.” Working in the video game industry has this bizarre effect of inverting certain social norms – like the handful of people who have never played D&D finding themselves feeling embarrassed or left-out of certain conversations.  So, once again I have been pressed into running an Intro to D&D game for a new group of coworkers.  OK, twist my arm…

What to run though?  It’s an interesting problem to contemplate because I want to really give them a taste of every aspect of this game that we all love.  For example, despite it being a one-off game I really wanted to run them through character creation, because I think that experience is integral to the act of playing D&D.  But having run lots of convention games I know time is precious and I didn’t want to waste a bunch of it on the logistics of character creation.  The good news is that we all work in the same place, so in this case we decided to have a character-creation lunch prior to the actual game.  It worked out very well and has whetted their appetites for next week’s game.

That still leaves the question of what adventure to run.  I went back to my first post about this and considered all the same stuff: L1, B2, and The Keep at Koralgesh (Dungeon Magazine #2) are all as enticing as ever.  I also considered:

Citadel of the Severed Hand – and many other One Page Dungeon contest entries.  This one is my current favorite and I’ve run it many times.  It has the advantage of having a couple factions of monsters that could potentially be either fought or bargained with.  I like that openness of being able to run encounters as either combats or as roleplay interactions, entire depending on how the players approach it.  I’ve run this one enough that I feel pretty confident in ways to scale up or down the power curve to various party levels, so it’s a strong contender.

Idol of the Orcs – a module originally written for Labyrinth Lord, I ran this one for my home campaign a long while back.  It’s got a very clever twist at the end of the first level, and I won’t spoil it here, but leading up to that is a pretty straightforward cave system inhabited by orcs.  While I really enjoy the twist, I worry that the lead-up to it doesn’t have quite enough meat on the bone for me to play with.  There are then also two more levels below the first, which I would probably have to cut out as there’s simply not time for it.

MSOL1 Blizzard Pass or BSOLO Ghost of Lion Castle – two solo D&D adventures that I remember quite fondly.  When I was 10-12 years old and without a group of friends interested in D&D, these modules were about as close as I could get to actually playing.  Blizzard Pass has a section in the back on how to run it as a standard module for a group, and unfortunately that reveals just how linear the adventure actually is.  Ghost of Lion Castle I think would be more open-ended, but has no such group-play printed version, so I’d have to piece it together.  Most likely though these games are best left for the purpose they were designed – solo play.

Dyson’s Delve  – The first level of this is what I’ve actually used for past Intro to D&D games and it works really well.  Unfortunately my group, while mostly total newbs, does include two players who played in the last one I ran, so they’ve already done this adventure.  I could push them through to the second level, which give those two players a nice feeling of continuity, but it would be a bit ham-fisted for the rest of them.

Nothing quite seems to be fitting the bill, and I’m running out of time to choose.  Right now I’m leaning on grabbing a couple smaller one page dungeons and sprinkling them on top of L1.  I like the idea of starting in Restenford, giving them a bunch of leads, and then letting them choose which to pursue.  This could blow up in my face if the group spends an hour debating on what to do, but I like that it feels like a taste of what a real campaign is like, rather than just fast-forwarding them straight into the dungeon.

I also have a slight nagging concern that if I give them a glimpse of too much stuff they’ll really want to play further sessions.  Is concern the right word here?  Hope?  Fear?  Maybe a little of both?  I’m very conflicted.

1 thought on “Another Intro Game”