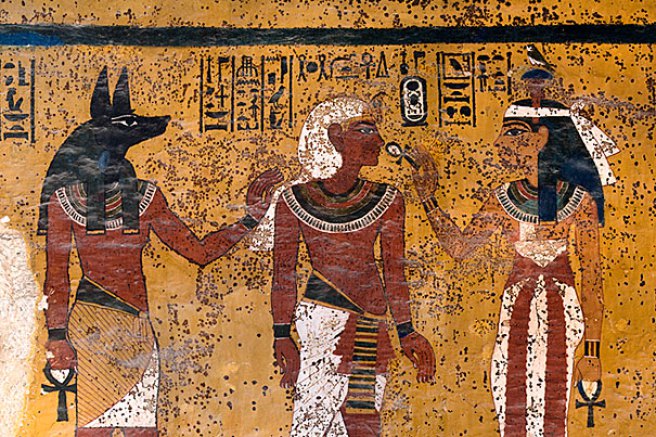 In my last post I discovered I had a lot of unanswered question about my primary bad guy.  Usually for my main villain I’ll just take a standard monster and tweak them a bit.  For example, if it’s an orc den, then I’ll probably want an orc chief that has a few extra HD, and maybe an interesting magic item.  For the Silk Guild I took a Rakshasa and turn it into a 18 foot tall hippo-headed man that lives in a giant bathtub surrounded by an anti-magic shell.

In this case I wanted a dog-headed creature, so I started with gnolls.  But I wanted undead too, so maybe I could twist a standard high level undead into gnoll shape.  While flipping through my Monster Manual I happened to notice that Yeenoghu is the “Demon Lord of Gnolls” but also “receives homage from the King of Ghouls”.  Well, I guess I should include Yeenoghu in here somewhere.  I went back to my entry for room #14, the sunken temple, and filled it out thus: 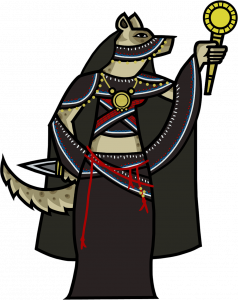 Home to Massika, the temple guardian, who appears as a ghostly female gnoll priestess. Massika has stats as a vampire. Instead of calling forth vermin she can summon swarms of beetles or animated skeletons from nearby crypts, and can command any other undead residents of this dungeon.

Massika feeds off of the pain of others. When taking damage victims must save vs. death or lose d6 Wisdom, each point sustains Massika for 1 day. Her gaze causes a Hold Person affect which she will use to capture victims and store for later torture to feed off their pain.

The large statue of Yeenoghu in this room acts similar to a coffin for a regular vampire. In a hidden compartment in the dais it stands on is Massika’s treasure: 7 pieces of jewelry (8,000 sp each), a ring of fire resistance, and a scroll with 5 spells on it.

I’m not a huge fan of level drain, so I usually replace that ability with something else in my undead.  Dyson Logos has a nice table of powers that I often use, but in this case I wanted to keep that element of my villain objectives generated in Part 1 about feeding on people.  With a nasty demon like Yeenoghu in the mix, I reinterpreted the “processing” part of the feeding into torture, with her life force coming off of the pain of those she tortures.  Well, I guess I’d better have a torture chamber right?  Hm, perhaps this could lead into what exactly re-awakened the Sisterhood.  I scanned the map and saw room 18 is reasonably close to room 14 and could be a good torture chamber.  Let’s fill that one in:

Each corner contains a statue of an ancient gnollish god standing behind a stone slab. Strapped to each slab is a thief who recently broke into the crypt and was captured by Massika (see 14). While technically still alive, the thieves have been severely tortured and have gone quite mad.

So there you go, some thieves have recently come into the tomb and reawakened the creature within, who is now feeding off their tortured cries of pain.  Ooh, I should make sure I have some good foreshadowing of that with wailing sounds echoing in the halls earlier in the dungeon.

The thieves have also inspired one more expansion – in room 33 I currently have the text “Perhaps the creators of this tomb hoped to seal the Sisterhood in, and they created a small chapel to a good god here to act as a sentinel.”  That doesn’t make much sense any more, as I’m pretty sure the ancient gnolls created this crypt for themselves.  That said, I feel like I can twist this using the thieves:

Sealed in this room is the corpse of the last thief to break into these crypts. Rubble from a desecrated statue is littered about the room, and the niche in the south where it once stood is now a makeshift shrine to a good god which has kept the undead out. Heaped next to it is the thief’s spoils taken from other parts of the crypt: 600 gp, a Mace +2, a Potion of Speed, and a cursed scroll in a sealed scroll tube.

You’ll notice two of the room descriptions above have some treasure in them, and pretty good treasure at that.  This is directly in line with my instructions from Volume 3, which says I should “thoughtfully place several of the most important treasures, with or without monsterous guardians.”  So how did I choose the treasure?  I rolled on tables.

Delta wrote a very nice post recently on why we should use the simpler dungeon treasure from Volume 3 rather than the letter coded treasure types in Volume 2 for this.  That said, I find this table just a little dull, and I’m pretty used to using the letter tables, as I know Table H will make me a huge hoard, while Table I will give me just a couple high value gems/jewels and magic items.  It’s not like I’m using the letter table that goes with the monster (vampires should use F, and mummies D).  In these cases I rolled on the table that I like for the room without regard to the monster guarding it.

Moreover, I don’t just roll on the treasure tables and go with the first result I get.  I’ve translated the OD&D treasure tables to IPT format to work with my favorite digital table roller Inspiration Pad Pro, so it’s super easy to open it up on my phone and generate 5 or 10 treasures and pick my favorite one.  Side note – I went to link where I posted those tables, and it looks like I never did.  So here’s a little treat for anyone that’s made it this far into this series of articles, the OD&D treasure tables in IPT format!

So, sorry Delta for not following your advice, but I bet my roll several time and pick a good one method mucks pretty strongly with the results anyway.  Perhaps if I can find some time I’ll translate the dungeon table into IPT as well and see what kind of results that gets me.

I used those tables to add some treasures to my hidden treasure room at 23, and fleshed out rooms 25-28 as well.  I couldn’t help myself and went ahead with a mummy in the big central crypt at 27.  The fiction in my head is now that when an important king was entombed, the gnolls would seal a priestess of Yeenoghu and her acolytes in with him to guard his tomb forever, and the Demon Lord blessed such creatures by turning them into these horrible vampire-like beings.  I’m leaving out the text of those couple of rooms as this post is getting long, but the adventure is really starting to take shape now and the next part will be filling in the middle bits with a lot of random rolls.  I’ll post the finished product with the last post of this series, which surely must be just one or two more away, right?