As part of my Warhammer research I started looking into the classic series of adventures known as The Enemy Within.  These adventures have an interesting history, having originally been published for Warhammer FRP 1st edition, and then re-packaged and re-released many times.  This makes it a little hard to track down the best source.  For example, I happen to have a copy of the first printing of Shadows Over Bögenhafen, which at the time was the second book in the series.  The first book was actually more of a campaign world resource, named simple The Enemy Within, which included an introductory adventure titled “Mistaken Identity”.  My copy of Shadows over Bögenhafen makes many references to this, but later printings would bind the two together as a single book entitled simply Shadows Over Bögenhafen.  Confused yet?  I was. 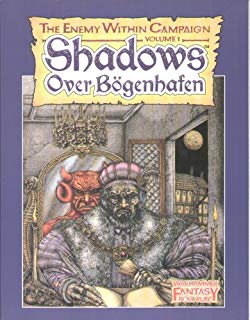 All that said, as I was only really interested in the adventures, I popped over to DriveThruRPG where they sell a PDF of the second printing of Shadows over Bögenhafen which includes Mistaken Identity and purchased that to read.  Or listen in my case – an interesting feature of the PDF reader I have on my phone (ezPDF if you care), is its ability to read the text aloud using the text to voice feature of the phone.  Sure, it gets hung up on some poor scanning and tabulated parts, but these books are mostly straight prose and it makes for good listening during my commute.  I even installed the British voice for my phone, because somehow with Warhammer a British accent just feels more right.

I played The Enemy Within many, many years ago with a small group of my fellow D&D players over a weekend.  It was a single long weekend of marathon RPG playing, and as I said many years ago at this point, so my memory of it is pretty hazy.  I’m not even sure how far we got, or how much we adhered to the actual written content.  This has always made me somewhat curious to read the thing, and certainly obviates any fear of spoiling it for myself.  So at long last I started reading it (sometimes listening to it), and I have to say it’s pretty darn good.

The game really focuses on convoluted plots going on around the PCs and how to sweep them up into it.  There’s very little in the way of keyed locations or specific enemies to fight.  More often are descriptions of NPCs, their motivations, and ideas for how to deal with what the players might do as a result.  Certainly it suffers from what many investigation-based written material suffers from – that it can present as a little rail-roady at times.  There are a few cringe-worthy moments when the text outright says the player’s mustn’t be allowed to do this or make sure the players achieve that.  That said, more often there are many options laid out of how to handle if the players run vs. stand their ground, or what to do if the players completely go off the rails.  The text is certainly very encouraging of the GM going with what the players want to do and trying to arm him or her with enough background info to handle any outcome.

I could see how a GM too wrapped up in making sure the players make it through “the entire thing” might strong-arm them through bits and make a real mess of it.  From the general reputation this adventure has and the many hilarious actual play reports you can find online, I’d say that often doesn’t happen.  Were I to run this, I think I would really want to keep a loose hold on the reigns.  I’d start with Mistaken Identity as written, but be prepared at any minute for the players to completely dodge the written material and go on to other things.

One other minor problem I have with the text as written is the organization.  The content tries hard to supply all the info you need, so there are some keyed locations and there are also action timelines.  The presence of both means that reading through the text straight results in you jumping forward and back in time and I feel a little confused.  I think I’d have to go back and write my own condensed notes, both just to solidify the content in my head, and to have something more manageable to work from as running a game from a booklet of dense paragraphs of text just doesn’t work for me.

One final note – while writing this up I discovered there’s an Actual Play Podcast of The Enemy Within.  I’m actually really jazzed now to go give this a listen and see if I can follow along with the modules.  I’ll be super curious to see where they go off the rails, and how the GM handles it.

Oh and yes, for what it’s worth, it does sound like Cubicle 7 will be releasing yet another updated version of this content for 4th edition.  I see no reason to wait around for that to happen.