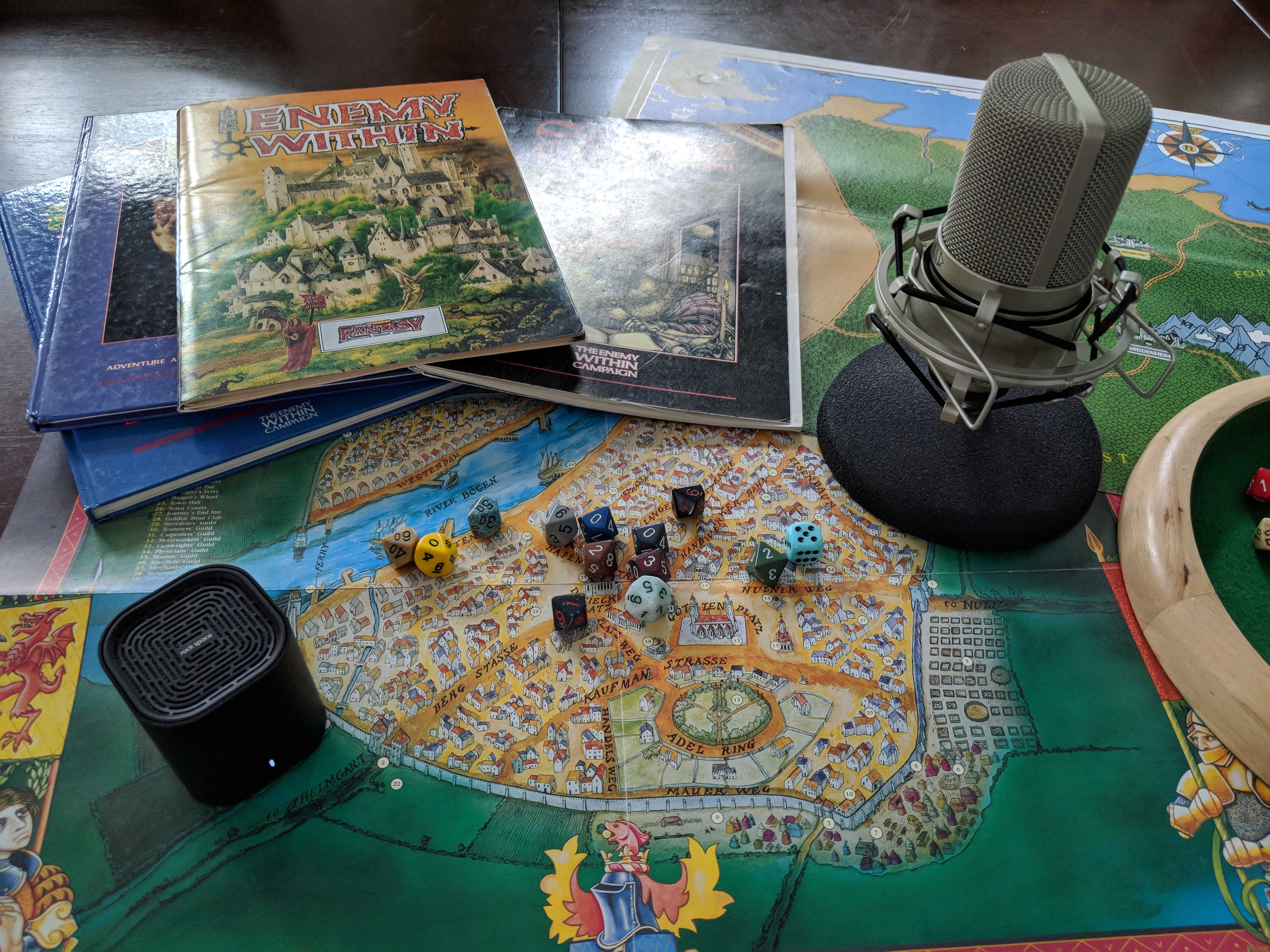 Over the past couple of days I’ve been listening to the Warhammer: The Enemy Within Actual Play podcast.  As before I stand by my opinion that raw recordings of roleplaying sessions are ultimately pretty poor entertainment, and usually I couldn’t make it through this kind of stuff.  What these kinds of things really need is some strong editing – a three hour session boiled down to 30 minutes of audio would probably actually be pretty good, but that’s a ton of work and I don’t blame anyone for not undertaking it.  The fact that these guys consistently recorded and made available 42 sessions is a commendable effort in its own right.

Despite that, as I said I normally couldn’t make it through this kind of content, but in this case there are a couple extra inducements that hooked me.  First is simply the mechanics of how I’m listening to it – I started with it as something other than the news I could listen to as I commuted to and from work for a few days, and then this past weekend while I was largely on my own and had a pile of chores to tackle I listened to it over my headphones while cleaning, driving, repairing things, etc.  Secondly, and perhaps more importantly, is that they’re running material which I just read over the past couple of weeks.  Listening to the group play through it, knowing what’s coming up, and getting to see what little tweaks and rulings the GM makes on the fly is actually quite interesting.  It’s very rare as a GM that you get to listen in on a practical example of someone running the material you are considering running yourself.  I am still only just into the third recording, but that’s over 8 hours of audio I’ve listened to so far, and at this point I think I’ll probably stick with it.

It also helps that this campaign is known for being really good, and tends to feature roleplay and investigation over combat.  In fact, rather ironically, I find the parts when they’re in combat the most boring.  I suppose that’s not surprising, as it’s mechanically when game time vs. real time slows down the most.  In the one I’m listening to right now (literally right now as I type this), it’s become clear for the first time that they’re using miniatures on a grid.  I kind of suspect in earlier fights that they didn’t do this, and while I get why they chose to (2nd edition WFRP certainly feels like it encourages it), I’m a little disappointed as I felt the earlier fights were easier to follow.  I guess that makes sense — without minis you’re forced to describe the scene more, and that makes for a better audio recording.

This is one thing I’m really looking forward to in Warhammer 4th edition.  The text tries to accommodate either style of play, but reading between the lines I feel like they’re encouraging descriptive combat over grid-based miniature play.  For example, here’s the opening text on the part about movement:

The amount of detail needed for movement depends on how you track where everyone is. Many prefer to use the ‘theatre of the mind’ method, where you describe relative positions and distance, and the GM adjudicates if it’s possible to undertake the Move or Action each player describes.

Even during tightly controlled combat Rounds, it is usually enough to narrate how your character negotiates the frenetic action, leaping barrels, sprinting for cover, or dancing around opponents as required.

Other groups use floorplans, grids, tokens, and Citadel Miniatures to represent where the combatants are standing, and this method needs a bit more specific information on distance and movement.

Similarly gone are “half actions” and the tight descriptions in 2nd edition of what you can and can’t do in a round.  This edition feels much looser, leaving a lot to GM fiat.  I’m sure there are gamers who will really dislike this, but for me this is exactly what I want.  Just tell me what you’d like to do and I’ll rule on how much of that you can get done in one turn.  But I’ve gone down a tangent now.  I did not mean to write more about 4th edition, let’s return to the topic at hand – the podcast.

One thing I’ve heard them do that I really want to steal is the idea of the “player’s journal”.  The DM asks for a player each session to volunteer to keep the journal.  The requirement is simply to keep light notes of major events, including names of NPCs, so the GM can give a quick recap of the last session at the beginning of each podcast.  In recompense the GM gives that player some extra XP scaled presumably on how useful the notes are for the purposes of the podcast.  While the players are not expected to keep the notes “in character”, the GM has said he’s fine with that if it makes the player happy.  Some of the players see the journaling as a means to an eventual free advance, while others get more into the roleplay of expressing their character’s viewpoint of the campaign.  While they’re not fighting over who gets to do it each session, neither do they ever seem to lack a volunteer, and I don’t think it’s always just the same player over and over.

While I think this mechanic was invented purely for the sake of the audio recordings, I actually really like the idea and may steal it for regular un-recorded games.  The fact is many times the game session begins with someone asking “where did we end last time?” or having to recap the entire session for a player that was absent.  As a GM any time a player has been out and asks for a recap, I always ask another player to do it.  Not only is my own memory as fallible as anyone else’s at the table, but as GM I find I my perspective can be a bit skewed.  I don’t always know what assumptions the players have made about the game (correct or incorrect), or what small important details they have or have not noticed.  Having a player recorded synopsis of last week seems really valuable, and if it helps a player feel just a little more immersed in the game all the better.  That, in my mind, is certainly worth a little extra XP.

So there you have it, I’ve finally found some actual play recordings I’m willing to listen to, and even got a good idea for my own games out of it.  I still wish someone would edit these down though.

3 thoughts on “Of Dice and Mics”