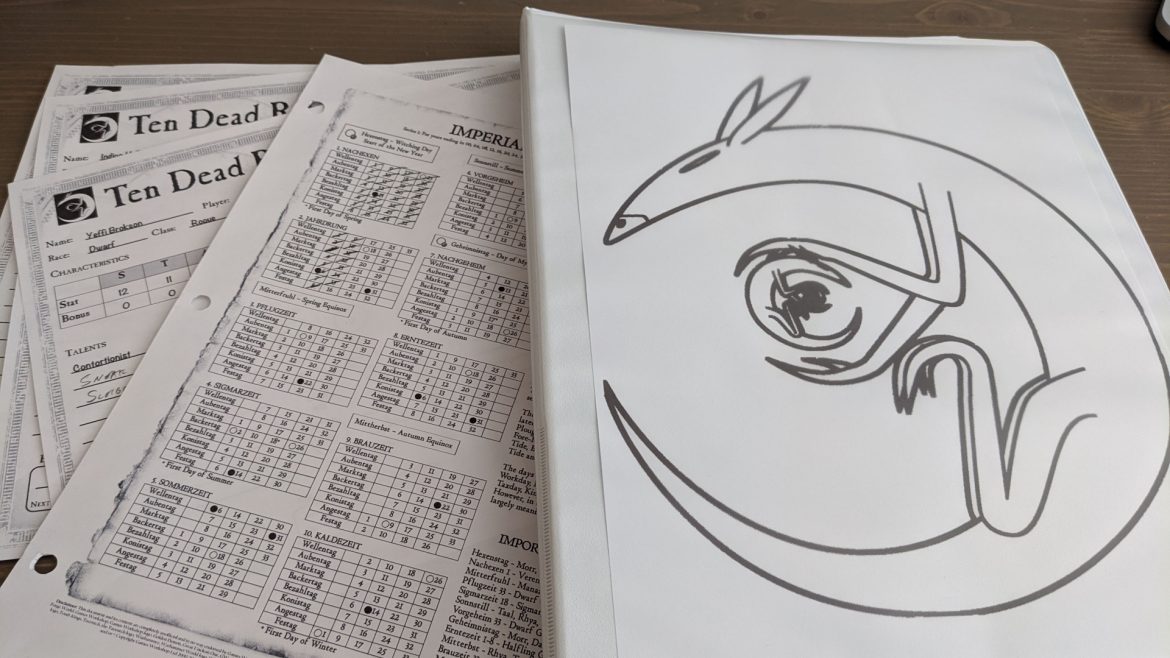 For running Ten Dead Rats I keep a small 3-ring binder for note taking and storing various material. It’s actually an old habit from previous campaigns I ran, though I’m typically a terrible note take. More often then not my notebook ends up with lots of info about the first three sessions, then very sketchy stuff if any for the remainder. This time though, I think the presence of the audience and the need for consistency has driven me to try and be a bit better.

I admit that in the past I have had problems with this – forgetting what certain NPCs look or sound like, or details about things that happened in past sessions. Of course the stream generates its own permanent record which is helpful, but the last thing I want to do is re-listen to every episode multiple times. I hope the show lasts long enough that it would simply not be possible to do that for long anyway.

So, here are a few tricks and habits I’ve developed that have helped me in becoming a better campaign note-taker. It is something I’m trying really hard to improve, so I’d love to hear other tips from folks.

The newest habit I’ve developed is to open my notebook and write an entry for each session before we start, and then take a few minutes after the session to add to it. The started as just necessity for remembering what announcements I wanted to make before we started playing. I wrote down the session number, and then a quick couple of bullets of what I wanted to announce. Then after the show, I took five minutes to write some bullets on the major things that happened, so I could use that for the recap at the start of the next session.

This has accumulated into a really useful set of notes for me. It probably helps that our sessions are only two hours long, so the note are short and it’s easy for me to remember the major beats after the fact. I can usually fit all the major elements of any session into 3-5 bullets. I wish I had done this for past campaigns, because it’s really accumulating into something very helpful when I’m trying to remember what the heck has happened over the course of the campaign.

For the content from The Enemy Within actual dates are kind of important, so I’m using the official Warhammer calendar. I printed out the very nice looking version hosted on the Winds of Chaos site, and tick off days as we play. I won’t be surprised if eventually the players will want to keep tabs on their own copy of the calendar, but it hasn’t happened yet.

An easier trick I’ve used in the past is to print up these pages of titled checkboxes. Any time something comes up in game that will happen in a number of days or will last a number of days, I write in the thing as the title below the boxes. Then each time a game day passes I open up this page and tick all the open sections. Here’s an image of an old one from my last long-running campaign:

You can see stuff like how long a charm spell lasts, how many days are spent in town, the pay period for various hirelings, etc. When the timer runs out or the thing becomes irrelevant, I cross the entire thing out. I guess the last group never did get those magic armaments from Sarlac the Sorcerer.

For Ten Dead Rats I’ve been keeping a list of each major NPC, with quick bullets of their physical attributes, motivations, and last known whereabouts. One thing I’ve been adding recently is a short note on the voice to remind me what they sound like. This can be anything from descriptive words “raspy nasal” or “english jowly” to the name of an actor or fictional character they are based on, eg. “Matt Berry”.

The latter is something I’ve been doing more of recently. I find it’s often easier for me to emulate characters from existing TV shows than to invent from whole cloth. Often this leads to some interesting influence on the character, like the King Zog sounding voice for the Witch Hunter who seems to have accidentally become the plumber-esque evil creature exterminator. “Whatchya got here is a classic case of vampires. We’re gonna need a whole lot of holy water to clean these suckas out.”

One thing I did in my last campaign that I really should carry forward was to print a page of randomly generated names with a lot of white space around them. It was just 3 columns of names, with a good inch or so of blank between each name. When the party latches on to some random NPC who is now suddenly important to the campaign, I’d find a good name on the list, circle it, and then start jotting notes about the NPC in the surrounding whitespace. This was really great for speedily adding a named NPC to the game that I had not previously envisioned, and then remembering they exist later.

Those are the major interesting things in my binder. There is other printed material that I find myself referencing frequently which I’ve three-hole punched for easy access. Stuff like maps of the areas the players are in, and copies of their character sheets. This is why I prefer a binder, it’s very easy to print anything and punch some holes in it to get it into a quickly accessible place.

And yet I’m sure my note taking could always be better. I’d love to hear what other things folks have tried to help them keep all the elements of a long running campaign consistent. So please hit me up with your thoughts in the comments!