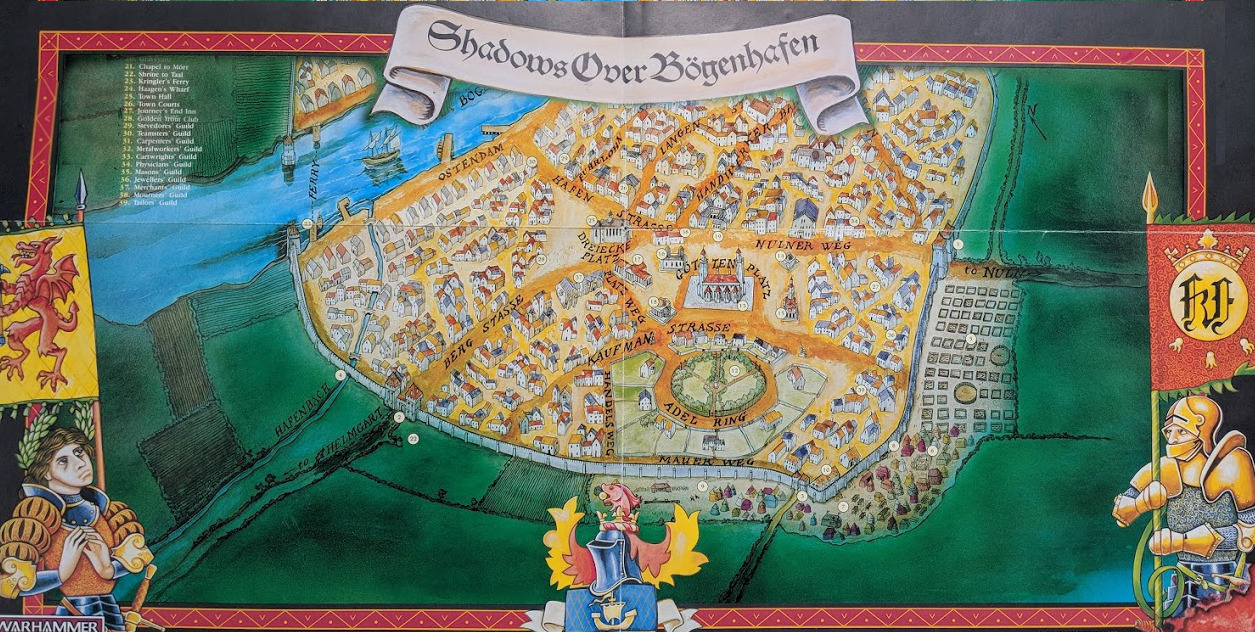 I’ve been continuing to listen to the Enemy Within actual play recordings on my morning commutes, and while I’m nearing the end, this morning I decided I needed a break. So instead I decided to finally listen to another episode of the podcast Fear of a Black Dragon. While scrolling back to get to the first episode another episode jumped out at me and so this morning I listened to their review of Shadows Over Bogenhafen.

I was really interested in hearing the Fear of the Black Dragon guys talk about Shadows Over Bogenhafen for a lot of reasons. Obviously it felt like a pretty good segue from listening to the Enemy Within actual play since they played that very module. And of course I’ve recently read the module and got very close to running it (my players are still about half-way through Mistaken Identity). But most of all, I really wanted to hear how much or little they quantified it as “old school”, given this very podcast’s inspiration for the topic of my first livestream with Dan on our Wandering DMs YouTube channel.

I was not disappointed in that regard, as Jason and Tom talked quite a bit about how the module sometimes approaches into the realm of railroading. To me, it feels like the module was written in a very old school style, but was then perhaps edited by someone who was starting to think in a more new school way. At its core, the module is about the players solving a mystery, so there must be some elements of plot in the text. Someone is committing horrible crimes, and the players must figure out who and stop them before they completely destroy the town. A fair bit of text is devoted to describing various NPCs, their motivations, what they know, and how they might behave should certain things come to pass. While none of that is new school per-se, it certainly smells like we’re headed in that direction.

That said, it’s all written in a very sand-box style. There are locations, with clues, but generally no proscribed order in which the players should encounter these things, nor is there much in the way of deterministic outcomes that must come to pass. This very nature I think leads to one of the FoBD criticisms of the whole thing feeling very disorganized. This module is not written as a plan or aid for running the game, but as the preliminary research to running it. This is also one of the module’s strengths – it includes so much information on the setting that it’s practically a mini campaign guide. I could easily imagine using this to run further adventures in Bogenhafen well after the mystery the text revolves around is solved. In fact, I’ve toyed with this very idea, and have written some tables about what else could go wrong in Bogenhafen.

Then there’s what feels like new school edits. The FoBD guys particularly pick on the scene in the thieves’ den under a particular inn. It is a giant block of boxed text that honestly when I read it my immediate gut reaction was, there’s no way I’m running this. In the FoBD review, Tom even mentions how in both his runs of this adventure nobody ever goes through that door – so what’s the point? It really does feel like during play-testing they had some characters that were very interested in leveraging the thieves guild, and the authors being good GMs invented something on the fly that went well, and then decided “we have to put that in the book.” There I think was their mistake, because the only way to get that excellent improvisation into the text was to write it up verbatim, which then feels really canned and forced and there’s just no way I’d ever use it.

Another point that makes me feel like this happened during the edit phase is the big question of “what if the players don’t save the town?” The text tells us we have two options – either fudge things so the town is saved anyway, or let it get destroyed. This is followed by a very ham-fisted suggestion of having a chance event like a rat scurrying by that disrupts things, or a random NPC loses their nerve thus foiling the evil plot at the last minute. This is followed a few pages later with a wonderful description of the horrors visited upon the town if the evil plot is not foiled, which feels to me extremely in setting for Warhammer. I mean, we all know that one way or the other the players are going to skip town once the shit hits the fan, so who cares if in their wake the whole town crumbles into oblivion? Why is this nonsense about fudging the plot here? Who on earth would be satisfied with that ending?

It really feels like there’s a struggle in the text here between two ideaologies. On the one hand, the plot is incredibly open ended, leaving the reader feeling inspired to invent all kinds of things only vaguely hinted at. The text regularly encourages this, with lines like “It is not possible to cover every contingency here, but you should be able to tell, using common sense and the information given in this section, what the outcome of a particular attempt will be.” On the other hand, it feels like an editor was haranguing the author with questions like “What about X? What about Y? What if the players do Z?” And so the authors added bits here and there to try and address those specific concerns, though clearly they were only touching the tip of the iceberg.

The good news is, it’s actually pretty easy to just decide “I’m not going to include that” and move on. As the Fear of the Black Dragon guys suggest, some good notes or liberal use of a highlighter is really going to help when running this thing. I suspect when I get around to running it myself I will likely write some kind of outline or index, because really there’s a ton of great stuff in this book and it’s just a matter of figuring out how to memorize it all, or failing that find the right part of the text quickly enough when the players decide to go somewhere new.

All in all I really adore this adventure. Is it old school? I think so, but I think it was likely written at that transition time just as new school sensibilities were starting to show up in published work. Thus we see the inklings of new school ideas leaking into the text, but not to such a degree that they can’t be overlooked. I really look forward to running this, and I’m sure I’ll have yet more thoughts to share once I do.