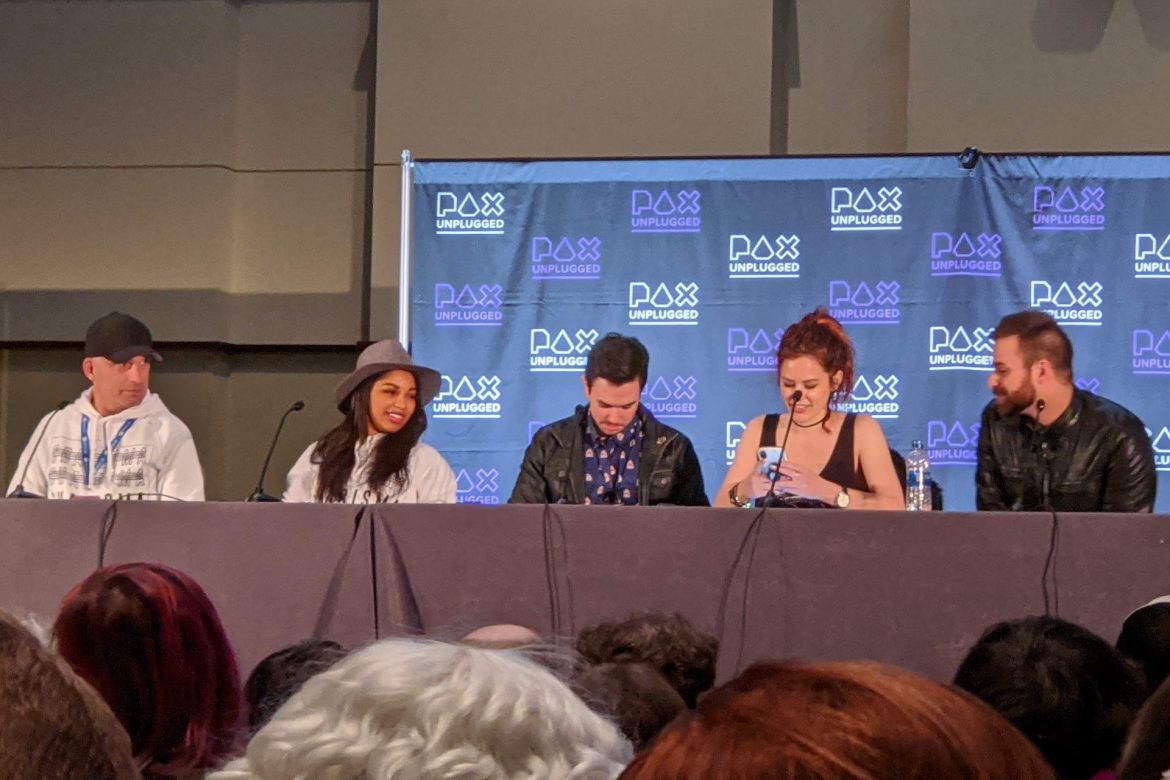 While PAX may still be trying to figure out how to organize RPGs, panels is something they’ve got down pat. I honestly wasn’t really expecting to attend many panels at PAX, but figured they might make a reasonable fallback activity when I had nothing else to do. Dan was a bit more on the ball and had identified a couple panels he wanted to check out, so we ended up going to four of them, and I would have to say they were by and large much more interesting than I was expecting.

The first one we attended is one that I kept stumbling to later describe. The title was “Lesbisnakes, Orcs, and Vampires: Who are TTPRGs Monsters?” It was a really fascinating blend of inclusivity and RPG encounter design. The panelists dissected monster design in TTRPGs and looked at how they historically intersected with marginalized communities. They tackled everything from the origins of orcs as potentially Tolkien’s analog of East Asians (referred to in one of his letters as “degraded and repulsive versions of the (to Europeans) least lovely Mongol-types”), to the question of who named Rust Monsters and if magically granted speech would they self-identify as “monsters” as their name implies?

I was personally reminded of one of my favorite modules as an 8th-grader, X8 Drums on Fire Mountain, which we discussed on Wandering DM’s recent episode on Puzzles. While the module contains some really great design elements, the cover art portrayal of native “orcs” is really problematic, and the general colonialist themes implied in the background of the module make me wonder if running this today would be considered inappropriate.

All in all it was an incredibly thoughtful panel with a lot of carefully researched historical notes that I found very insightful. I later realized one of the panelists, James Mendez Hodes, is the author of the article “May I Play A Character From Another Race?” which I had previously read and found to be really fascinating. Consider reading that article both from the perspective of “may I play an African-American in a 1930’s setting Cthulhu game” vs. “may I play an elf in D&D” and see if it changes your reaction.

The next panel we sat in on was “D&D Presents: New Show!” in which Chris Perkins announced the new stream that will be replacing Dice, Camera, Action! This panel was made extra enticing for us to see after having bumped into and said hello to three out of the five panelists that morning in our hotel lobby, and I tried desperately not to act like a complete fool in front of Chris Perkins.

The show itself aside, I found this panel fascinating from the perspective of learning what the D&D stream-viewing audience is looking for these days. For example, it was announced that their show would be 1 hour and 45 minutes long, which strikes me as both a very short and strangely specific duration. More interesting though was that this was only announced in response to an audience member’s question, who made it very clear that they wanted a shorter duration show, and in general the panel audience seemed to strongly approve of the choice. I had never thought of making a show so short, but now in retrospect it seems a pretty obvious choice.

Also I want to quickly commend Anna Prosser, who announced at the beginning that she’d be acting as the group’s moderator as well as a panelist, which at first sounded strange to me. Surely a panel of this level could get a moderator? She then proceeded to demonstrate why she’ll never need a moderator in any panel she’s on as she both expertly controlled the crowd and simultaneously acted as a charming member of the panel itself. I was seriously impressed.

Our third panel unfortunately was not quite as successful as the first two. “Upgrade Your RPG Liveplay” sounded like I would get more interesting insights into live streaming D&D which is something I’m interested in. Sadly most of the advice was more in the realm of how to run a good D&D game, and I was hoping for more stuff on the technical and promotional sides. Admittedly while this panel was running I was in the midst of my text-chain conversation regarding Savage Saturday, so I was a bit distracted and left a bit early to deal with that event, so I may not be giving it a fair shake.

Finally, Delta and I attended some of the Acquisitions Incorporated LIVE! performance in the main theater on Saturday night. Ultimately I have to say I’m not an AI fan, and was a` bit surprised when Dan said he wanted to see this. I suppose it was interesting to see a massive theater like that filled with people all to watch a live D&D game. The show was very much more on the performative side of things though, and Dan and I both agreed the pacing was much slower than anything we’d ever find acceptable in one of our games. I will say it was interesting to see that D&D truly encompasses a wide range of tastes, and we were happy to see some of it before sneaking out the back.

I don’t have any photos of that event, but what I do have a photo of is evidence of just how crazy organized PAX is around managing large crowds all wanting to see a popular panel. This may look like an empty ballroom, but if you look closely you’ll see green tape marking out a snake pattern on the ground. This is one of a couple “queueing rooms” that PAX had set up adjacent to their larger theaters. Apparently they use these rooms for the very popular events to keep the line from invading the hallways.

In fact, earlier Saturday evening Dan and I found ourselves sitting a bar with a friend who happens to be an enforcer, and Dan mentioned wanting to check out the AI Live show. “Well,” our enforcer friend said, “you probably should have lined up 3 hours ago.” We were shocked – we knew that popular panels tended to line up early, but 3 hours? He then let us in on a great tip — actually, if you don’t care about where you sit, a viable alternate strategy is to show up 5-10 minutes late to the big ticket panels. Apparently if they don’t fill up (and they try to have big enough theaters so that doesn’t happen), or if someone leaves after realizing they’re not into what’s being presented, you can slide in late and grab an empty seat last minute.

This is exactly what Dan and I did. It meant that there were no two empty adjacent seats, so we had to disperse into the crowd and communicate entirely by text, but for what we were hoping to get out of this panel it was way better than waiting in a line for 3 hours. I suppose it probably only works if you’re not such a huge fan that you have to have a great view or will be really sad if you don’t make it into the panel, but honestly I’m having trouble thinking of any panel I’d be so into that I’d be willing to wait 3 hours to see it.

So that’s my experience with panels at PAX Unplugged. All told I found them far more entertaining than I ever expected. And since these kinds of things are officially on the schedule, it seems to me that in future my PAX scheduling plan should be exactly the opposite of what I originally expected. It’s probably better to find the couple of panels you really want to see, plan your schedule around attending those, and then fill in the gaps with RPGs, rather than the other way around.

1 thought on “Panels at PAX Unplugged”