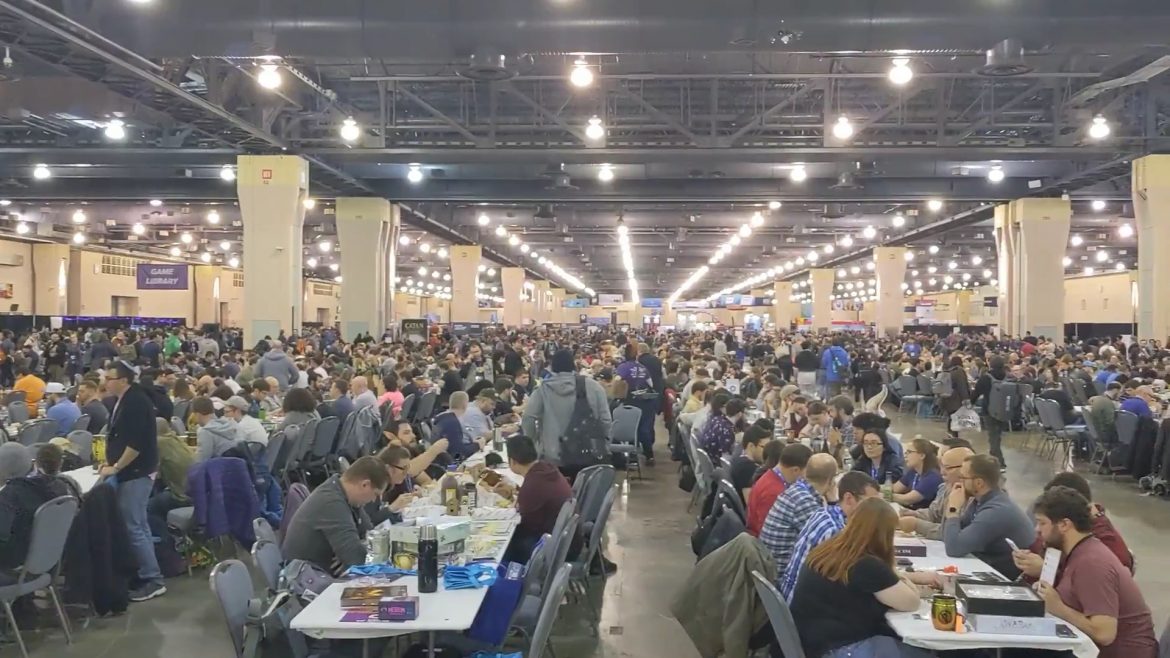 I have returned from PAX Unplugged with many stories to share. Rather than the traditional day-by-day recap of my experience, I’m going to focus my posts on specific activities and how they fared at the convention. There are so many different things to do at PAX Unplugged, and from what I’ve seen a lot of attendees focus on one or maybe two of these things, to the point of barely even being aware of the other stuff going on. As is typical for my first year at a new convention I tried to experience a little of everything, and as as a result had a very mixed experience, but have come away with a lot of knowledge on how to make the most of future years. So today, let’s focus on GMing free form RPGs at PAXU.

I should have done my homework. Recently I stumbled on this report of PAX 2017, the inaugural event, by graphic artist Thomas Deeny. He said:

PAX Unplugged didn’t have any preregistration for events, which seems to be part of the culture of PAX. Rather than having people register in advance and possibly not show up, they embrace the line where people wait and they make sure that seats are filled. While this works at the other PAX shows where they are seating scores of people in theaters, it doesn’t really work for a show where people are sit at tables of four or five.

Two years later I found this to be still very accurate. When packing for the convention I randomly picked some games I’d like to run and threw them in a bag, with no idea of what might actually happen. Running my recently published DMs Guild game Vile Crypt of the Reawakened Sisterhood seemed like an obvious choice for self-promotion. I also brought a couple Bossfight for Breakfast games at Delta’s request, and because a 2 hour game offers a nice bit of flexibility for scheduling. Finally I brought Bryson Springs because I wanted something that showed off my Insanity Cards and also something that was more character driven rather than a combat slug-fest.

On Friday morning I arrived with what was required to run Vile Crypt and few expectations. I went to the RPG HQ and there was a massive crowd, but fortunately also a very friendly enforcer outside that I was able to chat with. I did not yet have a plan of attack, I was just asking for general advice and information on how things worked, and he recommended I come back between 10-11 at which time he predicted the crowd would die down and the enforcers inside would have more time to talk to me.

So I came back later and discovered that the process is this — as a GM you come up to the desk and tell them you want to run a game. They take info from you including the title, system, time, and number of players for your game. You dictate all this info to an enforcer that is furiously typing away at a keyboard, so it’s important to be concise (more on this later). They then assign you a table, print out a sign up sheet, and put it on the table there at HQ. Players can wander in at any time, peruse the games on offer, and sign up for what they will. As GM, they ask you to come by HQ 10 minutes before your game, pick up your sheet, and proceed to your table to run the game.

So there at around 10:30 AM on Friday while there was still a bit of a line for players I signed up to run Vile Crypt at 7 PM. I had a color promotional post-card about the game on me which I looked for every opportunity to hand out. They were happy to put one next to my sign-up sheet, which between being full color and having R.A. Salvatore’s name on it I’m sure was attention grabbing and helped me get players. I also then signed up to run a Bossfight game in their earliest slot the next morning at 10:30 AM, which they said they’d hold onto and put out on the table the next morning. At 6:50 I showed up and my Vile Crypt game was completely full, and so off I went to my table. It ran very well and I was surprised to start to believe this unusual system might actually work. Then the next morning when I arrived 10 minutes in advance to pick up my sheet for the Bossfight game, I discovered they had forgotten to put it out.

As my wife, an academic librarian noted, the enforcers would all make very good librarians. They are very friendly and approachable, eager to help, and usually have no idea what the answer to your question is, but do know where to look for it. In this case there was a little shuffling around — looking for the sheet in different places, a trip to the table to see if a player had grabbed it and gone there, and then finally printing out a new one. As 10:30 came and went I was told “well, don’t worry, many of the 10:30 games are starting late anyway.” Finally another enforcer stepped in to help me recruit by addressing the crowd. “I’ve got a 2 hour Original D&D game starting right now – who wants to get out of line and play this?” We immediately had 5 takers, and off we went to play. Honestly, I suspect several of them were just happy to get out of waiting in line any longer, though they were a fantastic group and we had a really good time, even if it didn’t wrap up until 1 PM.

My other two attempts were complete failures. I wanted to run my horror game Saturday night, which uses Savage Worlds as the core system, and I had discovered that there was an official event called “Savage Saturday” happening from 6-10. I thought maybe if I glommed onto that event I might attract more players. I asked the enforcers about this Saturday morning, and they really wanted to help, but had little idea on how. They took my email and phone number, and advised that I wait to hear from someone before listing my game.

By 3:30 I was getting nervous that the game might not run at all, so I went to RPG HQ and just listed it as normal. At 4 PM I sat down to watch a panel and suddenly my phone started to buzz. I found myself on a 3-way text conversation with PAX’s head of RPGs and the guy organizing Savage Saturday. They were happy to have me join in, and so my sheet was whisked off the table at RPG HQ and I was instructed to show up at the room for Savage Saturday at 5:30 to set up. I had one sign-up on my sheet, and they asked I hold a spot for that person. I said sure thing.

At Savage Saturday, they had a ballroom with maybe a dozen tables, and one at the door with sign-up sheets. They put mine in with the rest, and players started to trickle in to play. To play the other games that is – mine failed to attract any players. By 6:30 I gave up and found something else to do. Perhaps horror is a tough sell to the Savage Worlds fans who seem to want more action-oriented games? If my sheet had been at RPG HQ first thing in the morning when the big line is there, would it have filled up? I started to suspect that having your sheet on the table when the biggest crowd is present (10-11 AM) is the best chance for success.

So Sunday morning I arrived early to get another Bossfight game on the table before 10 AM. Only, Sunday at PAX Unplugged is dramatically less crowded as it turns out. There was no huge line, and by 10:30 when the game was supposed to run I had no sign-ups. Several other games were in a similar boat, the RPG HQ seemed to have more GMs trying to recruit players than actual players. So once again I found myself filling my time with other PAX activities.

What did I learn? For anyone that wants to RPGs at PAX Unplugged next year (including future me that is likely reading this, Hi Paul!), here are some tactics I’d suggest:

UPDATE: I’ve linked above to the example RPG sign-up sheet. A couple notes — 8 is the max number of players they support. The additional notes included stuff like what the players should bring (dice, characters, etc), age restrictions, and any potential content warning. For example my Vile Crypt sheet says “Bring dice, age 13+, CW: torture”.

15 thoughts on “GMing at PAX Unplugged”