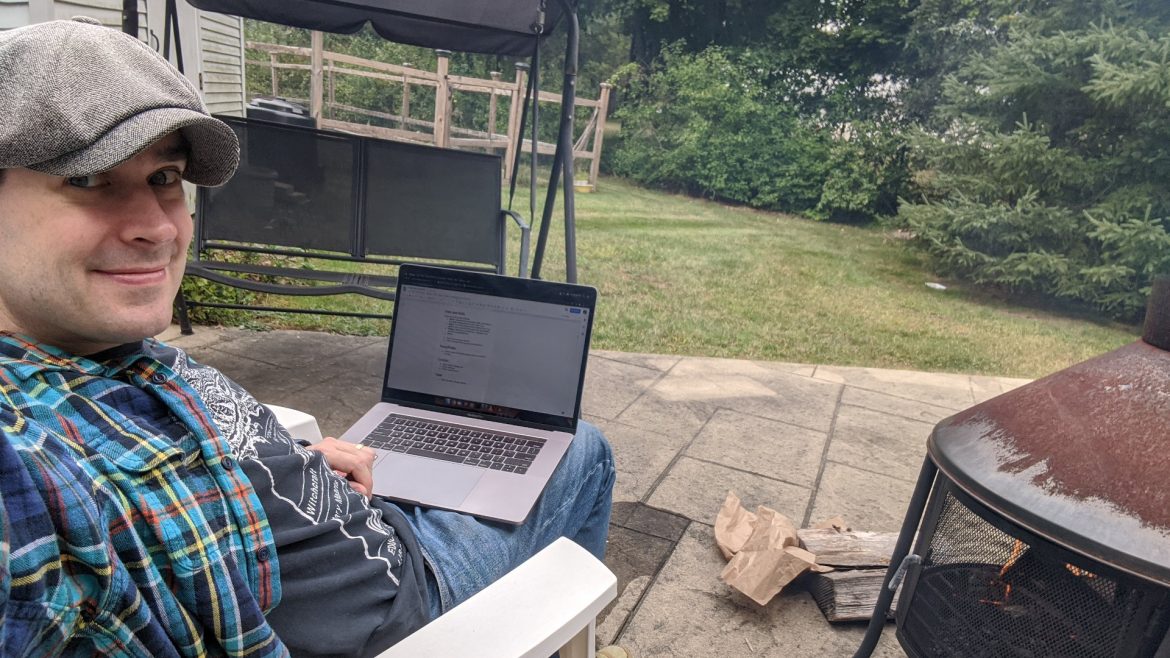 This morning I embraced the fall – I took my laptop outside and lit up the rarely used outdoor fire pit to do a little writing. As usual the initial cold snap took me by surprise. Personally I love this time of year, especially the little bit when the cold snap first hits and the leaves haven’t hit the ground yet. Eventually the leaf rot will hit me square in the sinuses, but for now I’m enjoying it.

These days fall always pushes my imagination towards horror. I’m sure a fair bit of that is influenced by Halloween, but also for several years now Carnage in November has been my deadline for pumping out a new horror module. So this time of year is typically when I start to feel the crunch.

So, speaking of horror, some of you may be wondering what happened to Insanity Cards. You may have noticed they’re no longer featured on this site, and if you look for them on DriveThru or TheGameCrafter, you won’t find them there either. What gives?

Well having written all these horror adventures over the years I’d really like to start publishing some of them. The question then inevitably is, what system do I write against? If you’ve ever played in any of my games, you know I use an incredibly kit-bashed version of Savage Worlds that my brother Max has dubbed Paulthulhu. I had to change a lot in that system to fit the style and tone of game I was looking for, so much so that it’s likely unrecognizable as Savage Worlds. I kind of learned that the hard way when I tried to run it at Pax Unplugged last year and failed to attract a single player to my table during Savage Saturday. I think horror is just not what the average Savage Worlds fan is looking for.

So the idea that I’ve had kicking around since the beginning of the year is this: I need to blow out Insanity Cards and write an entire system around them. But is that a good idea right now? I see other games like Warhammer Fantasy 4e and Fate of Cthulhu ditching sanity loss as a mechanic. There’s a lot of debate online these days about whether or not that kind of play is insensitive to real world mental illness. And I wouldn’t say it’s a cut and dry debate either, I don’t see a lot of irate fist waving or flag planting on either side of this one. Rather I see a lot of head scratching and internal debate. You can do your own research of course, but I’ll just quickly point you here, here, and here to get you started.

So before I go wrapping up a whole new system and a bunch of dependent works on a system that may be a bit controversial, I wanted to do my homework. I took a long hard look at Insanity Cards and came to these conclusions:

First, that the raw mechanics of it are sound and perhaps even engender a more sensitive approach towards cosmic horror induced mental trauma. The cards put more control in the player’s hands as regards the specific symptoms and intensity of the effects. They generally don’t use clinical real-world terminology, but rather describe specific symptoms or behaviors with precise direction on how to roleplay them. They’re a pretty far cry from rolling on a chart, getting “bipolar” as a result, and being left on your own to figure out what that means and how to roleplay it properly.

Second, that the trade dress and presentation was not doing me any favors. I thought it was cute to use artwork from an old hypnotist act from the early turn of the century, and footage from a film made at a similar time period in the advertising. They both poked a little too much fun at serious issues, and probably are not putting the right foot forward for this system. It was easy material to use since work from that era is all public domain, but possibly the easy way is not the right way in this case.

So, I’ve taken down the existing product and I’m starting to grapple with how to rebuild it. Here are the stakes in the ground I have made. I want a game that allows for, and in fact features, the roleplay of characters who lose their grip on reality in the face of supernatural horrors. I’d also like it to enable players who deal with real world mental health issues to join in without worrying about if and when it might get uncomfortable. I want it to be a full system so I can publish my adventures against it, but I’d also like to maintain the ability to lift the mental trauma mechanic and reapply it to other systems who may have problematic mechanics or be lacking them entirely.

That’s where I am at right now. I’m doing a lot of research. I’m consulting with a lot of experts. And I’m hopeful that something great will come out at the end. It’s going to be a lot of work, but I think it will be worth it.

1 thought on “A Little Fall Horror”