I ran three two-hour sessions of OD&D at TotalCon called “Bossfight for Breakfast.”  The general idea is to give the late risers a quick game to kick off the convention.  I think it’s received pretty well as it fills an otherwise unfilled niche.  Fitting a roleplaying game into just two hours is pretty difficult, and I have to cut a fair amount, or rather, I have to choose what I focus on.  Usually that means just two or three rooms centered around one very complex encounter.

For example, I have one game in which the stated objective is to save a friend who had been kidnapped by some evil cultists.  The party enters an enormous cavern which is bisected by a rapidly moving river.  On the other side is a massive rock formation, with rough stairs cut in a spiral towards the top where their friend is laid out on a stone slab.  The high priest stands over him ready to sacrifice him to Orcus, and his minions line the stairs leading up.  Oh, and, between the river and the rock outcropping is a purple worm breeding ground, full of juvenile purple worms, still big enough to take off a limb or swallow a halfling whole.  And if the players do reach the slab, the cultists may choose to hit a switch on the altar that opens a trap door dropping their pal 100 feet down into an underground chamber where his fall is broken by a huge pile of hay.  They don’t want him to die from the fall, as he’s the living lunch of the pair of level draining specters that live down in the pit below.

So yeah, it gets pretty complicated with players using stealth, flight, and any other clever means they can come up with to avoid the worms, kill the cultists, and rescue their pal.  With eight players at the table I bring twelve characters – I can usually kill off a few and I let players bring in a second one as reinforcements if there’s still a fair chunk of game left.  In one run I killed two players, had a worm bite the leg off of a third, and had a fourth permanently paralyzed on the ground.  That was a pretty good outcome for the bad guys.

To keep tabs of all this I chose to use miniatures.  Pictured above is the pre-made battle mats I created using Gaming Paper — it’s a nice time saver to just have that spread out on the table before the players even arrive.  I don’t usually use miniatures, and not just because I think the setup slows things down.  I think players do think a little more out of the box when all the action is playing out purely in their imagination than when rooted in physical objects and drawings on the table.  That said, with 8 players bouncing around such a complex terrain, the visuals do help keep thins on track.

Delta’s fireball rules were a stand-out star for these games.  Players never balked once at having to roll an offset to see how well aimed their fireballs were, and delighted in the mayhem when they missed.  I never even saw one player try to game it by adjusting for the possible spread – they always just targeted exactly where they wanted it and hoped for the best.  We had one fireball go off inches in front of the caster, affecting only himself which everyone (caster included) found hilarious.  In another case we had a fireball include a group of friendlies, one of whom was knocked down to zero and had to roll on my critical chart with the result of “maimed groin (unconscious)”.  I interpreted this as having the fireball blast send a piece of stonework flying right into his crotch so hard he could do nothing but lie on the ground and whimper.  The player was also delighted by the outcome — I suspect there will be many retellings of “that time I took a fireball to the groin.”

Another minor point of interest, I still use my B/X character sheets for my games, modified slightly for OED.  I never quite got behind Delta’s stone based encumbrance, so the movement chart at the bottom of those sheets remains unchanged from B/X (B20): 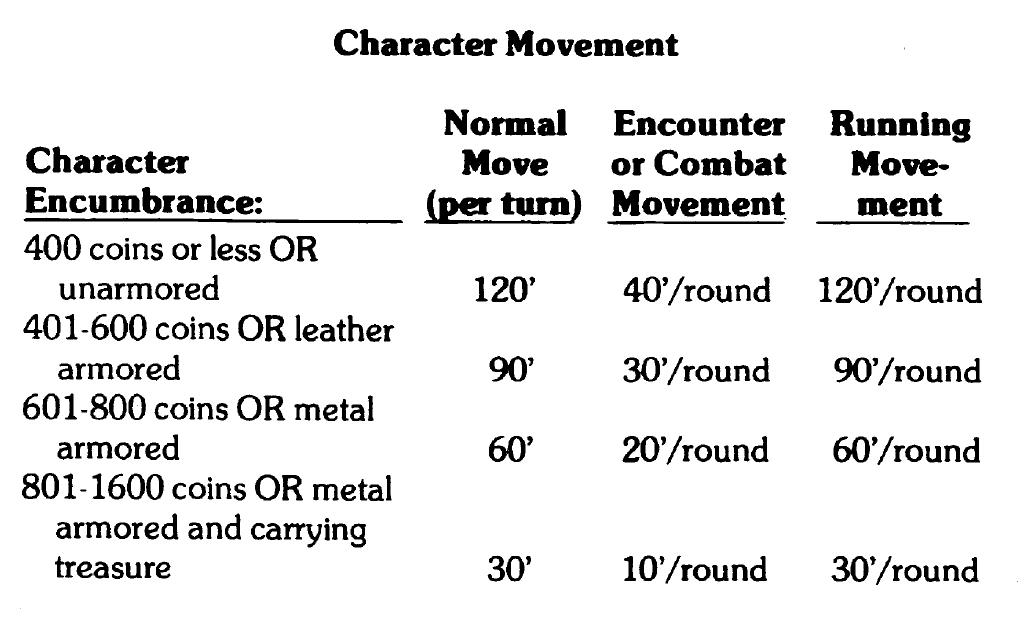 The influence of OD&D 6″/9″/12″ movement seems to be pretty obvious in the normal and running move, but it’s interesting to note that running is triple, not double a standard combat move.  I’m not sure where exactly my expectation for double movement comes from, that might require a bit of digging.  That said, if you convert the encounter move here back to inches you’ll find it comes up a bit short: 2″ / 4″ / 6″ / 8″.  I never noticed this before, and since I was using a battlemat I told players you can read your spell ranges and areas as simply number of squares.  Naturally they then asked to convert their movement to squares and when we did so I was surprised to find a normal unencumbered man was only moving eight squares.  I think really all this requires is for me to update the table on my character sheets to match OD&D rather than this unusual chart.

Another great help was Delta’s OED post cards, which I laid out on the table and told players as they arrived “if you’ve never played OED before, here’s a quick list of what’s different.”  It was really effective and much easier than trying to remember what may or may not surprise players.  Plus they walked away with a little info on what they had just played, and maybe we’ll create a few converts as a result.

I suppose that about covers it for my OED games at TotalCon this year.  I did also run one full four-hour game of it, which went very well as well.  It’s always a blast having a group of players so excited to embrace the mayhem and enjoy this frenetic style of play.