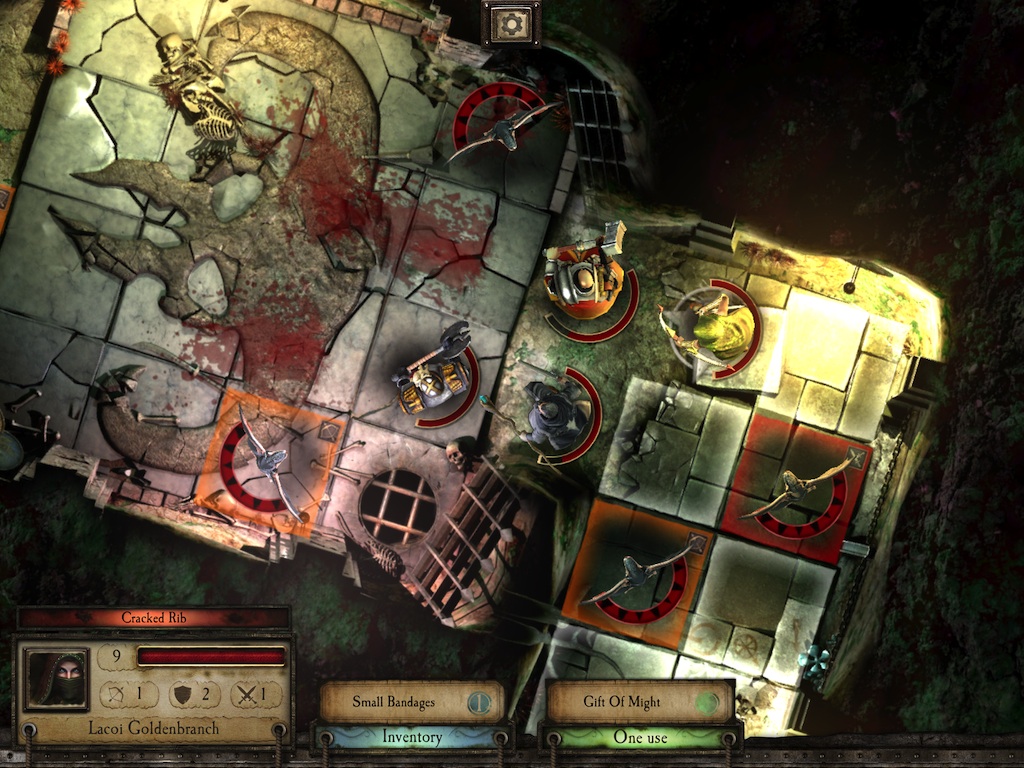 A couple years ago an iPad version of Warhammer Quest came out, with gorgeous graphics and an almost slavish adherence to the original board game rules.  I enjoyed it, but the content was a bit repetitive and the monetization scheme was a bit aggressive for my tastes — it sold as a premium title then sold additional characters and adventures as purchasable add-ons, which frankly is pretty much exactly how the original board game was sold.  Anyway, I forgot all about it until very recently while looking for Warhammer adventure inspiration.  I discovered it was available for PC on Steam, and at that moment was on a ludicrous sale of about $5 for the game and all the unlock-able content, so I bought it and over the weekend spent a good amount of time playing it.

The graphics aren’t quite as amazing as they once were, and while I adore its close adherence to the original board game rules, warts and all, I could see how folks who don’t have that affinity for the original may think the mechanics are a bit flawed.  But it definitely felt very Warhammer-ish to me, and besides enjoying the tactics of moving dwarves and elves around a board and groaning every time repeated random events piled up the bad guys (another 1 for power?!), what I really noticed this time was the map movement between adventures: 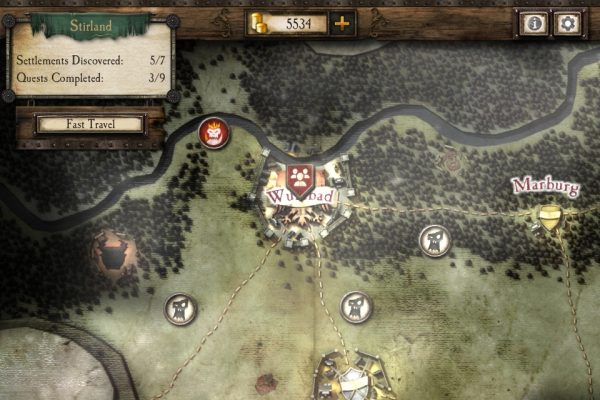 It does a nice job with fog-war exploration, and is clearly rolling on random travel event tables as you move around, just as the old board game did.  The little touches though like the orc camp between Marburg and Wurtbad, and the mysterious standing stones on the left, really push that Warhammer feel of isolated towns standing like candles in the darkness against the oppressive, danger-filled world.

This got me thinking about campaign design.  How would I run a Warhammer campaign today, given all that I’ve learned about running D&D campaigns?  The two are definitely thematically different, but I’d hope I could take some of the stream-lining I’ve done when running D&D and apply it to Warhammer, with my ultimate goal as always being a zero-prep game.  To that end, here are some random disjoint thoughts:

Themes – I continue to argue that the major difference between old school D&D and new school D&D is the major theme of play: exploration vs. tactics.  Where does Warhammer fit into this?  Honestly, I think Warhammer is neither of these.  For me, Warhammer is about scraping by, plugging one hole in the fight against Chaos just to discover four new ones have opened.  Perhaps, in one word similar to “exploration” or “tactics”, it’s “survival”?

Content Creation – For D&D, I’ve found two methods of content creation really satisfying.  First, there’s the simple stocking of a dungeon, as outlined in my Dungeon Design Workshop series.  The second is hex-crawls, as seen in Delta’s excellent Outdoor Spoliation games.  While I have repeatedly failed to run Outdoor Spoliation myself, I did run a similar game once for HelgaCon called Joranthian’s Bones, and still really enjoy the format of a few set pieces separated by a vast grid of wilderness and lots of random tables.

For that style of play, Warhammer has the excellent Renegade Crowns, a book chock full of tables for creating a random world scattered with settlements and threats.  That said it does focus a bit heavily on the relationships between the civilized areas, and I’d kind of like to push harder for the sense of isolation found in the villages and towns of the Empire as seen in WHQ.  I’ll have to give it another read and think about how it might be adapted for that.

Back to the first item, the odd dungeon I suppose is OK, but abandoned ancient dungeons full of dangerous monsters guarding lucrative treasure just doesn’t quite feel right for Warhammer to me.  In D&D I love a sense of that Conan-esque self aggrandizement, and thus an Indiana Jones like search for lost treasures fits perfectly.  In Warhammer I’d rather see motives of simple self preservation and perhaps the odd delusional hope of actually saving the Empire against the ever-growing demonic threat.  If the players are searching for a valuable treasure in monster laden dungeon, I would hope it’s more a means to an end, such as buying off the corrupt Burghermesiter to actually deal with the skaven infestation, rather than just for personal gain.

Cities – The above leads me to something that’s missing from D&D that I really want in Warhammer – large messy cities full of the destitute, the corrupt, and many layers of danger lurking below a veneer of civilization.  I love Warhammer adventures that focus on discovering a nest of skaven in the sewers or a vile cult preying on the not-so-innocent citizenry.  And while I’d like the players to be able to deal with such threats, I’d like a method for immediately filling the power vacuum they create when they destroy such a group with two or three new ones equally bad if not worse.  I’d like to see the progression of “Finally, a nice normal town” to “oh geez, we have to save the innocent villagers from this hidden threat” to “this place is screwed, time to move on.”

Tables – OK, all of the above leads me to this: more tables.  The big thing I’ve come to love in D&D recently is using random tables: carousing, motivations, what are the goblins doing, etc.  These random unexpected elements can be the touch-point to awesome adventures, and this is what I was seeing through the matrix while playing Warhammer Quest.  I was remembering all those horribly punishing tables you have to roll on just to get back to town and hopefully have enough gold left to level up (pro tip – we found playing the board game back in the mid-90’s that you really should have a good 10-20% extra buffer to lose and still have enough when arriving at town to level).

I want more tables for a Warhammer game.  Specifically, I want one for what new horrible threats arise in town when the players finally eliminate one.  I want a table for the dangerous things that assault them on the road while traveling between civilizations.  And then finally, I need some useful empty location maps to set the encounters when the players pick one to deal with – hidden camps in the woods, abandoned cellars connected by sewer tunnels, etc.

So, to start on this path, I dredged up an old free resource I remember finding once on DriveThruRPG: Johnn Four’s 650 Fantasy City Encounter Seeds & Hooks.  This seems a promising table, though I haven’t read through all 650 items.  As written it’s probably a bit too random and varied for my purposes, but perhaps I can use it as inspiration for building my own tables as mentioned above, and give it a bit of a Warhammer flavor while I’m at it.

I think I also need to find a few more good city/town maps.  All to many are sadly just giant grids of empty boxes that make me wonder what any given building is and why players would care.  One of my favorite city maps ever is this lovely one of Altdorf, which I’m sure players will recognize as I completely stole it for the city of Bridgefaire in my D&D campaign:

It’s kind of perfect because of all the recognizable land-marks and clear distinction of neighborhoods.  The palace and temple stand out immediately as big recognizable locations.  Of course neighborhood #4 is the poor district, being down-stream from the confluence of the two rivers and nobody wants to live down-stream in a medieval city.  It’s just the right mix of purposefully placed locations with plenty of empty space for dropping in whatever the campaign demands.  I know there are a few more similar Warhammer city maps out there.  I’d love to find a few of smaller nameless towns or villages with similar levels of detail.

Geez, all this really sounds like I’m gearing up to run a Warhammer game.  I guess I better start thinking about recruiting some players and finding a time slot.