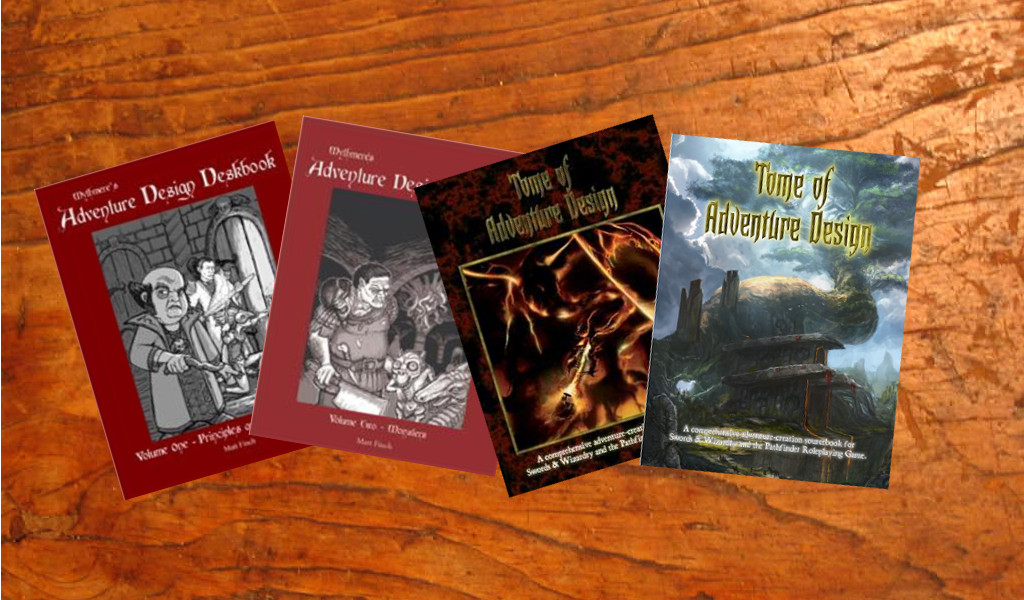 In my Dungeon Design Workshop series, I began with a geomorph painter and Matt Finch’s excellent Adventure Design Deskbook for the initial inspiration.  I absolutely adore Finch’s work on these books, the first of which I received as a prize for my entry into the 2010 One Page Dungeon contest.  It was a fantastic prize and clearly good advertising, as I immediately went out and bought the second volume.  I’m really happy I did that, as since doing so I’ve had a lot of trouble tracking these books down.  When trying to link to them in my Dungeon Design Workshop series, the only link I found was for the first volume at Blackblade Publishing’s store, on which the purchase button is conspicuously missing.

Well, last night I was sitting in bed with my kindle and wanted to look at these books, and for once actually found myself wishing I had an electronic version rather than just the physical ones.  I mean, I was already in bed, and those books are all the way upstairs on my gaming book shelf.  So naturally I opened up my web browser and started searching the internet in hopes of saving myself a trip all the way up the stairs.

Amazingly, I finally discovered what happened to these books – they were condensed into a single volume and renamed as “The Tome of Adventure Design”.  You can buy them as either print+PDF from Frog God’s website, or as PDF only on DriveThruRPG.  I immediately snapped up the PDF from DriveThruRPG, figuring it was worth $21 to not have to walk up the stairs.  The price is a bit steep, but this book is very dense and well worth the cost.  If I didn’t already own print copies of the earlier versions, I probably would have spent the $42 on the print and PDF version from Frog God.

Even better though, it turns out that there were in fact four total books in this series.  The PDF contains all four, and so I was treated to an extra dose of awesome Matt Finch tables.  In total you get about 300 pages of nothing but tables, and it is glorious.  I have not yet had time to really digest the second half of the book yet, but by their titles it appears book 3 focuses on dungeon creation and book 4 focuses on the rest – adventures in cities, in the wilderness, waterborne, underwater, extra-planar, etc.

I guess my one criticism is that I’m not sure what’s going on with the art.  The version on DriveThru seems to have different cover art than the one on Frog God’s site.  The new PDF has a bunch of interior art that was clearly borrowed from Rappan Athuk, and in general the layout / formatting / fonts have likewise been copied.

At first blush it can also feel like there’s a lack of overall instruction here – lots of tables but not a ton of guidance in how to put all the pieces together into a final product.  The casual reader may think that there’s a linear path through these tables, and that you’re somehow supposed to roll on every section to create an adventure, similar to how the Renegade Crowns book works.  I don’t think that’s the case — I would look at these books more as reference.  For example, when creating my own geomorph-based dungeon I started with locations from volume one, then jumped forward to volume two for creating a monster type to live in my dungeon, then back to volume one to find out what the motivations of my bad guys were.  In another instance I might instead start with volume one’s “missions” section to see what it is the players are being asked to do before even inventing a location or its inhabitants.

Finch touches on all this at the beginning of volume three, where in two pages he outlines the creative process using a very good Jabberwocky analogy.  I won’t try to summarize it, I think it’s brilliant that Finch managed to condense it down to just two pages and I don’t think I could do any better.  But he summarizes it thus:

To summarize, this book is an immense Jabberwockatorium, in which you can choose to gimble about in one or more specific parts, or through which you can galumph toward a well-defined objective. The choice is yours.

Generally I come to these tables not with a completely blank sheet, but usually with some kind of idea.  In my Dungeon Design Workshop I started with knowing I wanted a self-contained dungeon based on geomorphs and had to figure out what was in there.  In my thoughts with Warhammer I knew I wanted several random hidden enemies in a town with a wide range of convoluted plots.  Each use dictates its own approach to these tables, and I’m happy to say that the tables don’t fail to come through in spades in every case.  Oh, what a frabjous day indeed.