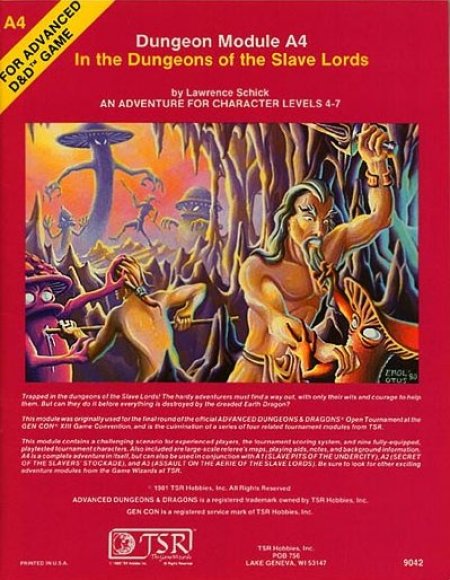 OK, A4 is actually one of my favorites, possibly my most favorite, of this series.  Which is really kind of odd, because frankly, the trope it’s based on is one I’ve frequently railed against.  It’s the old “you’re taken prisoner, try to escape” bit.  Not only is it overplayed, it’s often the worst offender when it comes to railroading, especially if you play out the capture.  Fortunately by being a tournament module it’s easy for A4 to avoid this problem: it simply starts with some boxed text about how the party was captured and what they’ve endured, then dumps them into dungeon from which they must escape.

For a prison escape adventure, this one does not hold any punches.  The characters have no equipment, heck, almost no clothes at all.  The spell-casters have practically no spells at all.  None for the magic-users, a couple for the clerics who manage to memorize only the essentials (cure light wounds. create food and water, etc.) despite the slavers’ system of only allowing them to sleep for a few hours at a time.  There’s one gimme at the front, some spells on a scroll, but the party has no light by which to read them!

It feels harsh, but it really does encourage inventive playing on the part of the players, which I loved as a player and think would be a hoot to DM.  Even better, while advice is given to the DM on how to handle some common tactics players might try, it’s not like each room specifically drops items on the players that have an obvious use.  Some enemies have flint weapons, which clever players will realize can be used to strike sparks and ignite a fire for a light source.  There are bits of wood and pitch in different areas, but these materials have a dozen uses beyond just making torches.

Best of all, the dungeon actually does have multiple exits.  There’s no single right way to finish this module, and the players needn’t hit every single encounter.  This makes A4 a bit unique in the series, and better in my mind.  Both adventures I ran at last GenCon included a multi-level dungeon, with multiple connections between each level, including the surface to the first.  The levels themselves were small, maybe 3-6 rooms in total, but having multiple exits on each really gives the party that sense of choice even if they do end up exploring the entire thing.  Though I think this is to be avoided as well, and A4 and my own GenCon adventures include more content than any party could realistically be expected to complete.

In retrospect, I think our DM was a bit too generous with us.  I’ve tried following our route through the map but I can’t make it work.  I think perhaps he dumped a couple extra resources on us than actually exist in the module.  Also, when we got hold of the scrolls and some light to read them by, he made a point of telling us they could be memorized from like a spellbook, which we latched onto and immediately spent an hour memorizing a spell each.  This is blatantly not in the module, and also seems kind of foolish to me.  The fact is there are more spells on those scrolls than we’d be like to use in the course of the adventure, and there’s no reason to hold onto any resources in a convention game.  If he hadn’t told us that, I bet we would have been a lot less stingy with the spells, reading them off the scrolls rather than hording them for some non-existent future use.  If he was trying to be generous, I think he actually did the opposite.

I’m definitely looking forward to running this, which puts me in a difficult situation at least for HelgaCon.  Should I decide to run any of these at HelgaCon, I’m tempted to follow Delta’s lead and start at the beginning and run one per year.  That makes this 7 years of content though, 7 years before I get to run A4.  Is it worth it?  I suppose there’s always TotalCon.

6 thoughts on “Tournament Modules – A4: In the Dungeons of the Slave Lords”