I made an interesting little discovery when Delta visited last week.  We were in my game room when Delta spotted my Holmes box set on the shelf, and he pulled it down to admire the artwork on the cover.  The box is in pretty good shape, and the range of colors on the cover kind of belie the moniker “blue box” it has earned.  Anyway, I pulled out the Moldvay boxes as well to compare and look at the difference in quality of those boxes, and conversation turned to the “Gateway to Adventure” sales pamphlet included in those boxes.

It’s a cute pamphlet to skim through, with nice full color images of the products that were available in 1981.  I mentioned to Delta that I really enjoyed the page on OD&D, which by that point was 6th edition and already being billed as a “Collector’s Edition”.  “What OD&D page?” he asked bewildered.  We flipped back and forth through the booklet, and could not find the page I was referring to.  I was sure I had not imagined it — but where was that ad?  I opened up the 2nd Moldvay basic box I own (yeah, I own two, don’t ask).  Sure enough, there was the same pamphlet, but this time with the OD&D ad.

The two booklets are identical in almost every respect except for page 9.  Here are the two page 9’s side by side: 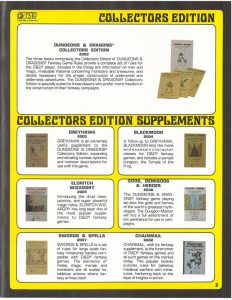 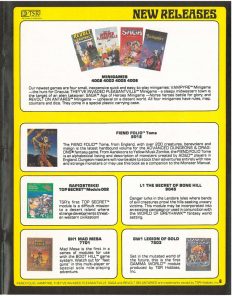 OK, that’s not entirely true, there are two other minor differences.  The index page on the old booklet says “Collector’s Edition, Collector’s Edition Supplements” for page 9, while the new booklet says “New Releases”.  Page 10, the obverse, varies slightly in that the old booklet has a section at the bottom (about 25% of the page) listing “new releases” including the minigames, and the modules for boot hill, gamma world, and top secret as “coming in 1981”.  In the new booklet, this ad has been replaced with one for the RPGA, which is not surprising given that all those items now appear on page 9.  While both booklets are copyright 1980, and both have the date 1981 displayed prominently on the front cover, clearly one is slightly older than the other.

Delta and I both found this really fascinating.  Though we’re several years apart, Delta having cut his D&D teeth on Holmes and I on Moldvay, we have the shared experience of never having heard of OD&D until fairly recently.  We wondered if perhaps there wasn’t some kind of intentional effort over at TSR to cover up the existence of OD&D starting around 1981.  That sounds perhaps a bit more nefarious than I mean it.  I could imagine that TSR might think that OD&D was confusing to its audience, and wanted to steer them either towards basic D&D or AD&D.  Two different lines is confusing enough, a third only makes things worse.

I seem to recall in one of the Dragon magazine articles I read recently concerning the upcoming releases of AD&D and the basic set (Holmes), that while readers may be interested in AD&D as a second separate product from the game they were already playing, the basic set was meant strictly as an introduction to neophytes.  Dragon Magazine readers, being already familiar with D&D, were not the target audience and were actually being dissuaded from purchasing that product.

Perhaps these two booklets come from the Moldvay Basic and Expert sets respectively.  I certainly don’t trust that any of the boxed sets I own actually come with all the original pieces.  In fact, for my Holmes set I put the bits together myself, buying each part separately (the box, the book, B1, and the dice) and reassembling the set once I had collected them all.  I could imagine that once the Expert set was released, the combined Basic/Expert box sets were looked at as the replacement for the OD&D line.  What was once simply meant as an introductory set took on the purpose of its ancestor OD&D — that of being a simple toolkit for creating a custom home campaign as opposed to AD&D, which is clearly meant as a standard system which offered consistency likely born from desires of the tournament community.

I wonder if the folks at TSR had as clear a picture of the needs the two different products addressed.  From reading Gygax’s articles, I think at least he did, but whether he was able to communicate that to all his employees is less clear, and certainly I think they failed pretty hard at communicating it to the market.  As a kid I had no idea that the basic sets and AD&D were really different beasts.  I think a lot of us were in that same boat back then too.  Perhaps TSR as a company would have been better served by just picking one and running with it, though personally I’m kind of glad today they didn’t, as I appreciate both products for what they are.

Anyway, interesting food for thought.  I don’t know if the changes to this booklet are well known by the collector’s community, but if not I’m happy to provide further info or scans as desired.

4 thoughts on “Gateway to Adventure”