Last January I posted about how the growth of convention attendance seems to be at odds with the decline in the growth of the industry.  Despite hearing about layoffs at major gaming companies, and the general feeling that most game designers these days have day jobs, convention attendance continues to sky rocket.  My own theory is that the culture is returning to one driven by the hobbyist rather than a professional industry.

While unfortunately I have little statistical proof of the decline of the professional industry, I did have this nice chart to point at showing GenCon attendance numbers: 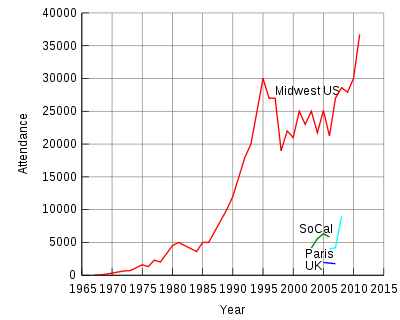 According to an email I received from GenCon’s marketing department this morning we now know the numbers from GenCon 2012: over 41,000.  Yup, it’s off the chart.  I think it’s also worth noting that this was GenCon’s 45th year, which means we’re just 5 years away now from the 50th anniversary, which I can only imagine must draw record numbers.  I was at the 25th myself, I remember that being quite a big deal at the time.

Anyway, I just find this a very interesting phenomena, especially in this digital age.  It’s really kind of gratifying to see such low-tech activities like gaming that require face to face interactions finding a way to thrive, even if they’re not making anyone very much money.