With my model base size fixed at 1″ x 1.5″, from there I can determine that an individual hex should be about 2″ wide, and thus the full board will be about 2′ x 2′.  This is small enough to fit nicely on a table top, but it’s still big enough that storage becomes a tricky question.  At minimum, I think I’m going to have to build it as a bi-fold board monopoly style and then find a box large enough to fit it in.  Or perhaps I will build a custom box with the board built into it, sort of like a chess box where you open it up and flip it over to make the board. 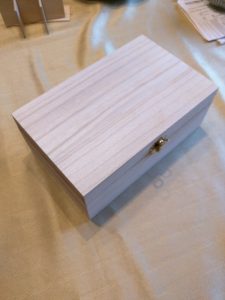 So last weekend I went over to Michael’s to see if they had anything that might serve as box for my game.  They did not.  They did have some nice unfinished boxes like the one pictured here, all of which were far too small to fit the contents of my game.  But as I mentally pictured a 1′ x 2′ box large enough to fit the board, I realized the units would be swimming in all that space.  What could I do to contain them inside the larger box?  So, I bought a couple of these smaller unfinished boxes to use as army boxes.  I’ll make one for the empire army and one for the chaos army, each just large enough to contain all the unit models, plus maybe some extras like the ogre cards, cannon markers, and maybe some dice.  I like the idea of each player picking his side and taking the appropriate box.  Maybe I could even fit a copy of the rulebook in each box. 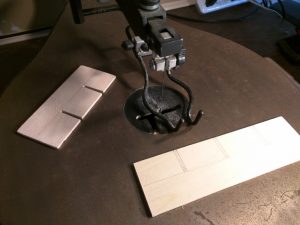 Alongside the boxes I bought some pieces of basswood to build dividers.  I used my trusty scroll saw to cut up some pieces wine-box style to make little cubbies inside the box for each unit.  Man, I forgot how much I like working with that scroll saw.  What a neat tool.

Actually, before the cutting began I did a lot of measuring.  The interiors of those boxes are somewhat awkward size, and it took some effort to figure out how to divide it up to fit all the units. 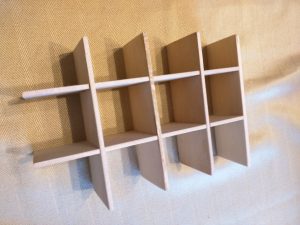 I managed to make something that will work just fine for the empire army, but the chaos army is a bit larger (14 units over the empire’s 11), which is causing me some difficulty.  Especially as I have yet to even figure out what models to use for all the units.  I’m sure I can make it work, but it may require some kind of layering technique, where a tray of some kind such that I can take advantage of the depth of the box.  Or maybe I’ll just take another trip back to Michael’s and see if I can find a wider but shallower box.  I’m committed to taking my time with this project, so I’m not against scrapping any part of it along the way. 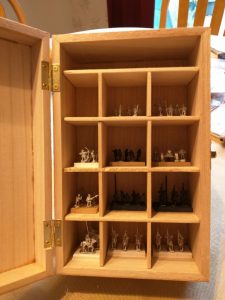 Here’s the finished interior with all the empire units placed inside.  Most of those units are temporary, just fun-tacked unpainted models onto a bit of foam core so I could experiment.  As you can see I had to turn the left-column sideways to fit all the units.  It’s pretty tight but everything fits, and the slot at the top could be used for the cannon markers and dice.  I also kind of want to felt line the whole thing to minimize damage of shifting models.  I’ve started some experiments along that line, I’ll have more pictures to post of that when it gets further along.

I’m thinking for the exterior of the box I’d like to put a nice large graphic of the army’s symbol on the front.  The chaos symbol is pretty easy to find, it appears people like that as a tattoo design, but the empire symbol is more difficult.  I’ve found a couple but the resolution is all pretty low, and I’d like something I can print out at a good 6″ square to decoupage onto the top of the box.  If anyone has anything that might be appropriate, please do let me know.

Ultimately I really should start painting the models, but that feels like the easy part, so I’m holding off for now.  I think once I have a plan for the various pieces I can take my time enjoying the construction of each, but the first phase really has to be experimentation on how exactly to build each part.

The board itself, and the box to hold the entire thing, is still quite an open question.