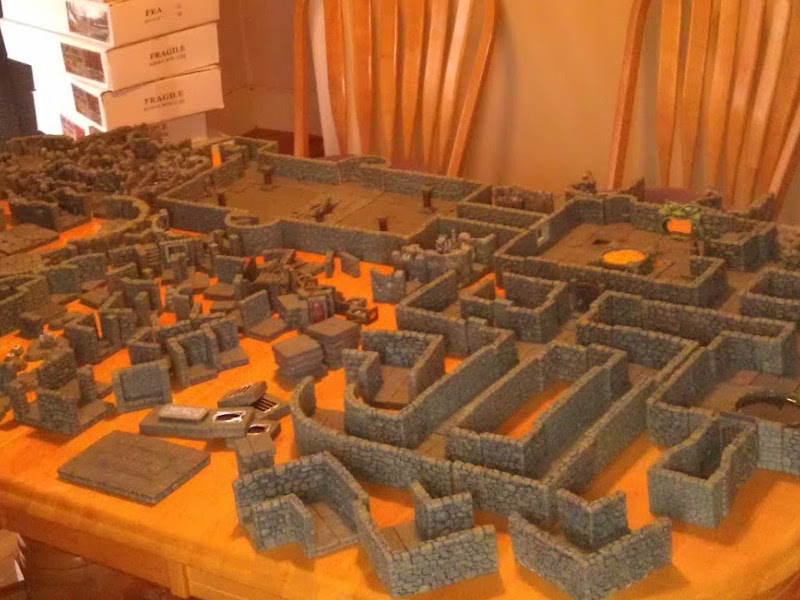 When it comes to board games, I have a weak spot for dungeon crawlers. I have collected quite a few over the years, in fact so many that when I sit and try to list them I’m sure I’m missing some. Never-the-less, I feel inclined to try, so here we go. Note, I am intentionally leaving off so called “RPG in a box” games like the D&D series of board games or say Mice and Mystics. Those games could probably fit in this category pretty well, but they have a certain sameness about them that I think I’d end up writing the same text over and over again. 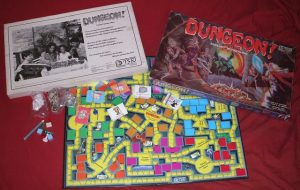 The grand-daddy of them all, this game is intrinsically linked to both the history of D&D my own history of playing D&D. The story goes that the creator of Dungeon!, Dave Megarry was a player in Arneson’s Blackmoor campaign, and the two Daves made a fateful trip in 1972 to visit one Gary Gygax. This trip is famous for being the sort of birth moment of D&D, as Gygax and Arneson compared notes directly on how they had been using Chainmail to run a new sort of game. And oh yeah, Megarray came along to pitch his board game inspired by Blackmoor play called Dungeon! The newly formed TSR would publish D&D in 1974, and Dungeon! in 1975.

Fast forward to the late 80s, when on a trip to New York City I insisted my mom bring me to the Compleat Strategist, an actual entire store devoted just to gaming. I had previously only ever purchased gaming stuff at the back of comic book stores or toy stores, so this was a special treat. I wasn’t leaving without buying something too, and what I picked up was the first miniatures I ever bought — The New Dungeon: Miniatures and Game Supplement. I chose these because it was a nice collection of adventurer miniatures perfect for D&D. I had no idea this was an expansion for the board game Dungeon!, and I wasn’t sure what to do with the included cards, until eventually I got a copy of The New Dungeon!

OK, history aside, how is the game? It’s actually pretty darn good. Each player plays a single character, and the classic D&D character types are all present, each with their own special abilities and their own target amount of gold they need to win. The dungeon is laid out in 6 levels filled with progressively more difficult monsters. Mostly the difficulty you want to face is based on the character you choose. While the abilities of the characters are not balanced against each other, they are balanced against how much gold they need to win. So it is a very reasonable strategy to choose a weaker character and stick to the low levels to try and quickly grab the low amount of gold necessary. There are also little upgrades you can find along the way (magic swords and a few special items) that may help. And of course the fun bit of dropping all your treasure where you die, leaving a nice target for others or yourself. Inevitably someone will attempt a silly strategy of taking a powerful character, amassing a moderate amount of gold, and then trying to purposefully lose against a weak monster so they can come back as a weaker character who can use that amount of money to win. Tip: I’ve never seen this strategy actually work. All in all it’s a pretty fun game, though for a game that is so evocative of D&D, the competitive nature of it always seems a little at odds. 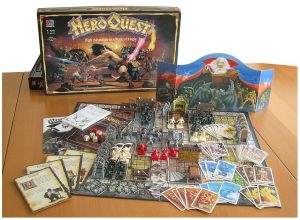 Lots of us remember Hero Quest. Coming out in the early 90s this is perhaps the very best board-game-ification of D&D. One person is the DM type who is allegedly attempting to win by killing the players, though most games I’ve played sees the DM player behaving more like a neutral arbiter / referee as in RPGs. Up to 4 players control characters trying to cooperatively explore the dungeon and achieve a certain goal. Since the game has a DM player there’s the ability to have arbitrary goals and hidden secrets. The game is really quite fun and a great light alternative to a full on RPG. I played this most in high school – one particular friend in my D&D group and I were the stalwarts of our group, and sometimes when the rest of the group flaked and we were down to just the two of us we’d crack this game out. I loved it so much I refused to purchase my own copy, as I didn’t want to spoil any of the adventures (he owned it and thus always played the DM role). Eventually I would regret this and then end up trolling eBay until I found my own copy. Used copies demand pretty high prices due to it being, frankly, the best game ever. 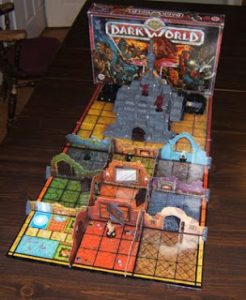 What we really all remember about Hero Quest was the little furniture. Dark World was an early 90s competitor to Hero Quest, and attempted to one-up the former on the cool toy front. Its dungeon had walls, doors that actually opened and closed, a secret door masked as a big painting, plastic chests, actual little plastic bits for treasure (potions, winged boots, and… grenades?), and oddly this weird wand with colored beads you had to shake to determine turn order. Sadly, it failed on the mechanics side. All the characters were the same, no special mechanics for the barbarian vs. the elf. The board while cooly three dimensional was always the same 3×3 grid of rooms. Ultimately, it was just kind of boring and not nearly as good as Hero Quest. I long ago lost most of this game, but like Hero Quest, it was a great source of cheap minis and I still have many of the miniatures hanging around, including a rather cool manticore that I still use today in D&D games. 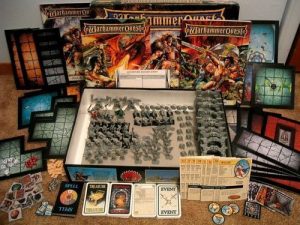 OK, this game is my jam. Seriously, I played this game so much I had to replace the falling apart box with a plastic bin. I wrote software for this game. What is it – why, it’s the clear decendent of Hero Quest. Actually it totally is exactly that. Hero Quest (and later Battle Masters) was a partnership between Games Workshop and Milton Bradely, I suspect in an attempt by the former to go more main stream. Hero Quest has some obviously GW inspired stuff, like chaos warriors and fimir, but the GW link was kind of downplayed. WHQ is all GW, and in addition to really embracing their lore, it included a few key improvements over HeroQuest.  The most notable for me was the elimination of a DM role. Yes, that does eliminate some of the cool hidden secrets and story feel of the game, but they make up for this with a lot of charts and also made it play a bit better with fewer players. A two player game of HeroQuest is a little awkward – the hero player must control all four heroes. A two player game of WHQ works really well, either playing two heroes each, or just one hero each and cutting all monster numbers in half. Anyway, I could go on and on about this game, but then I’d have to make a weird video and I just don’t think I can compete with that guy. 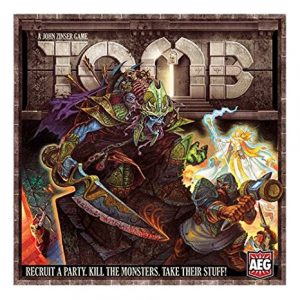 OK, on to more modern games. I bought Tomb probably at the GenCon it came out. This game stands out as possibly the best implementation I’ve seen of a competitive dungeon crawler. Players begin by drawing from a deck of encounters (monsters, traps, and treasure) and take turns stocking rooms with those cards. Then they form up a party and try to raid the dungeon. There’s an in interesting bit of strategy there in the setup – can you try and fill a room with just treasure and then reach it first? Do you think someone else is doing that and thus you must try to put a nasty monster into their room? Can you remember where you put all this stuff once the game is halfway over?

The other thing I love about this game is that you play a party of up to 5 characters, and they die. Oh boy do they die. A big part of the game is choosing when to return to the inn to try and recruit new party members. And the game is just chock full of different kinds of characters. You have your classic types – warriors, wizards, priests, and thieves – but also each individual character has some unique trait or ability. Having some of your party die off and then returning to choose new party members is really quite fun.

On the down side the game isn’t what I’d call a fast game. Also, you have to really accept ahead of time that this game is competative, as lot of the special cards are specifically for screwing with the other players. 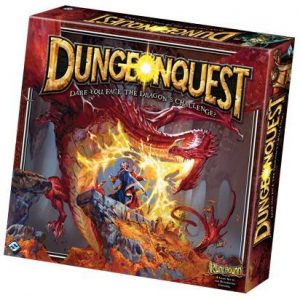 After dungeon crawlers, my next absolute favorite board game feature is tile laying, and this game combines the two. This game has a lot of little gameplay features I love too, like the lower catacombs layer where you can drop down, have a whole second side adventure down there, and then come back up somewhere else on the board. It’s very puzzley, and in fact has solo play rules. The down side is what plagues a lot of competitive dungeon crawl games – each player is kind of just playing against the puzzle on their own and it’s just a race to see who gets to the end first. As a side note – I used the components of this game for early prototypes of Ruins of Glitterdeep. I just adore the art and composition of this game, almost too much as I end up just a little disappointed in the actual gameplay. 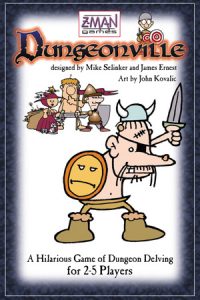 Don’t let the John Kovalic art confuse you, this is not Munchkin. (Oh yeah, why isn’t that game on my list?) Like Tomb, this game has you churning through party members, though in a far more humorous way. In this game there are 5 dungeons to explore and each player secretly owns one of the dungeons. You win both by accumulating wealth from exploring dungeons and by accumulating “blood tokens”, left behind by hapless adventurers who die exploring the dungeon you own. So in addition to fitting out your party and fighting monsters, there’s a second fun layer of bluff to this game trying to not let on which dungeon is yours in hopes that more adventurers jump in and explore it, and die horribly in the process. The downside here is that unlike other dungeon crawl games there’s no real exploration component. Each dungeon is just a stack of encounter cards, there are no rooms or secret doors or the like. Normally this would disqualify a game from getting on a list like this for me, but the bluff aspect of this game is just so much fun. Combined with quick gameplay and fun artwork, I just really enjoy this game.

I’m certain I’m missing a ton from this list. Perhaps some day I’ll do a second pass. Given how often I buy these kind of games, it almost feels inevitable.