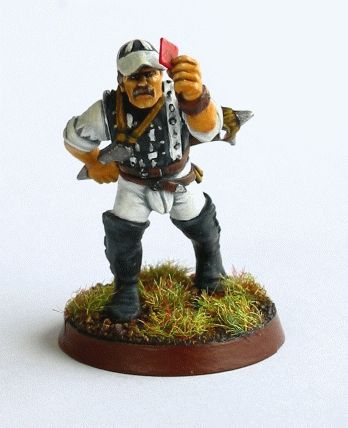 Large player count D&D games and games focusing on investigation have a common problem, and I think, a common solution. Both types of games have the potential to disengage players that are not directly involved with the GM. Investigative games create this issue by requiring a lot of direct time with one “face man” player when interrogating an NPC, while large scale D&D games simply require the GM attention to be split across many more players, thus lessening the time each individual gets. So what’s the solution? Simple: make the players play with each other.

Let’s focus on investigative games first, eg. most of my horror / Cthulhu games.  As these games really focus on the GM doling out information based on player actions, it’s easy for the game to become a series of interaction between one player and the GM. OK, sometimes it’s two or three players, but it’s rarely the entire table. For the players that remain, not only are they not involved in what’s going on, they’re kind of encouraged to ignore it. “My character isn’t there, so I shouldn’t know any of this.”

I tried to address this with the “Opening Scene” concept, which I first mentioned in my report on my Mazes and Monsters game. Basically the idea is that in addition to background on the character, each sheet described what the first scene of the game would be as well as the character’s motivation in that scene. Since the game is focused on investigation at this point, I tried to include some information in one character’s background that another character needs, and then framed the first scene such that going right up and asking for the info feels pretty natural.

I tried to push this even further in Checkpoint Zulu, going so far as having one character’s primary motivation to deliver certain sensitive information to another. It did not work as well, in this case I think because the espionage setting makes players want to hold tighter to their secrets, so it’s a kink in that game I’m still trying to work out. Still, I really like the opening scene concept and will likely try to keep using it in other horror games. Having the game open up with me simply describing the physical layout, saying “go”, and then watching all the players scramble to talk to each other is really satisfying. I can then pop around and answer pointed questions or adjudicate actions, really behaving more like a referee than a story teller.

In D&D, the game is more action-oriented, and the delay in DM attention is simply waiting for your turn to come around. That comes up chiefly in combat, and there are other parts of the game where the players are encouraged to interact with each other more – chiefly in strategizing. This can be as simply as discussing which part of the dungeon to explore next, but also comes up when the players are well informed of upcoming dangers and must formulate a plan of attack. Webb did this expertly – by focusing the game on outsmarting the combats rather than just hitting a lot, every combat that we saw coming we’d stop to strategize. And here’s the crazy part – that’s when the DM would leave the room! Not only are the players playing with each other, they’re doing so to the point where it makes sense for the DM to excuse himself completely.

The idea that these two problems, and their solutions, were kind of the same thing hit me when I was reminiscing on David Wesley’s Braunstein game.  He told me how when he first ran it he had a crazy idea that he would oversee every conversation, but once he had more than a dozen players in the room all acting at once he immediately realized that was madness. There was a definite twinkle in his eye when he then told me of talking with his players later and learning of the crazy things their characters had gotten up to without him.  He was clearly tickled to think that the game was in a way bigger than him and his plans for it.

I would love, therefore, to see more ways to bottle that magic. My favorite time as a GM is when the players are so engaged that they’re rapidly sharing ideas, or arguing, or even just roleplaying their characters off of each other with little need for my input. We need more ways to encourage this behavior – to turn the GM away from the role of tour guide, and more into the role of referee.

1 thought on “Be the Referee”