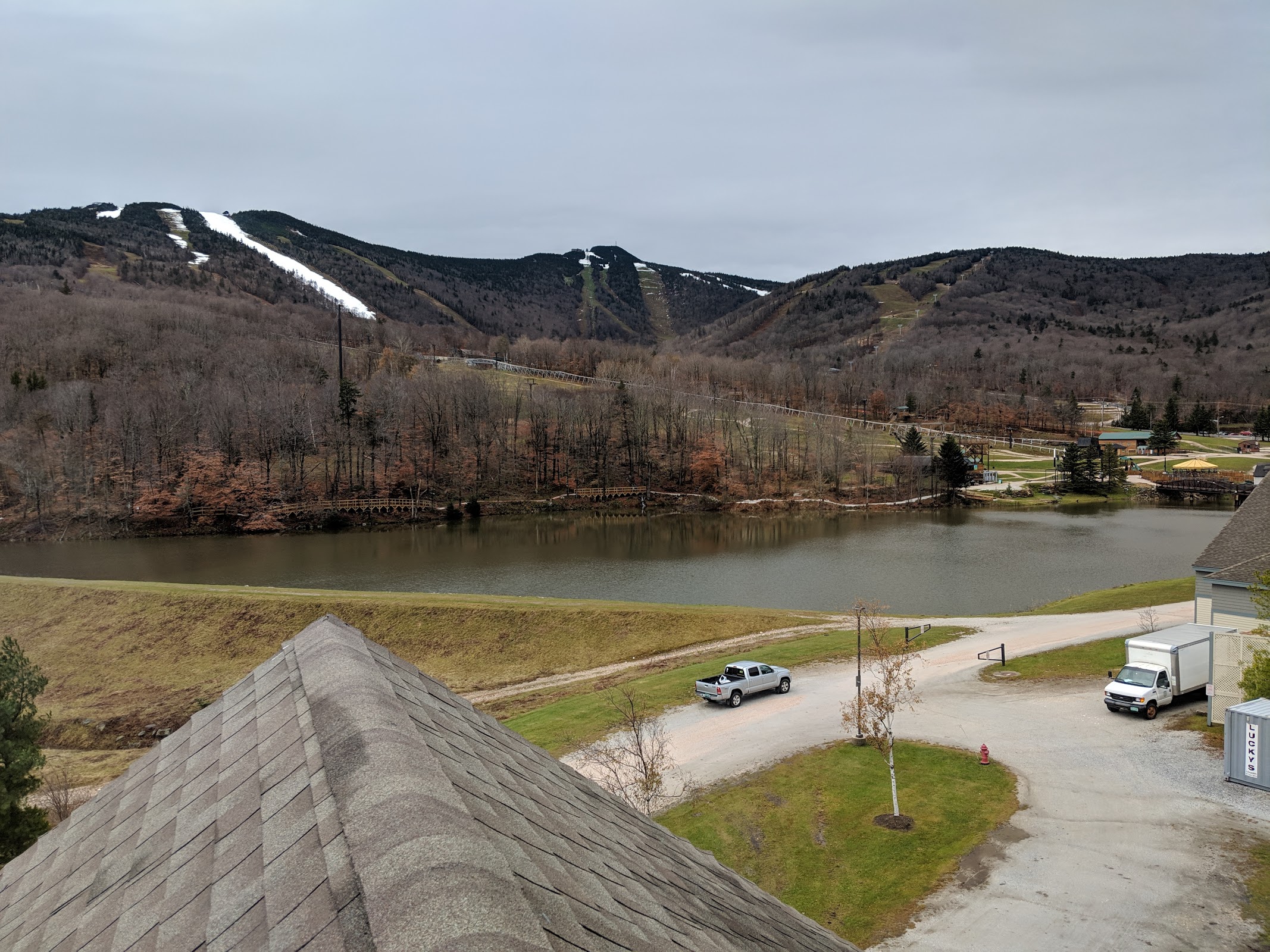 Carnage on the Mountain came and went a week ago and this blog has remained silent.  My apologies readers, it’s not that I don’t have anything to say, but simply that I’ve spent the past week laid out on the couch wondering how on earth the human body can produce so much mucus.  I have quite a lot to post about actually, but I just haven’t had the energy to do so thanks to this awful head cold.

The cold came on gradually, but in retrospect I can tell now that it really started as early as the drive up on Friday morning.  As usual I spent the whole ride gabbing with my good pal Adam.  We see each other rarely these days so between catching up and talking games, the three hour drive just flies by.  I recall at the end of it being surprised at how strained my vocal-chords felt.  I bought some cough drops at the hotel store out of concern that if just three hours of conversation left me feeling this horse that I was in danger of losing my voice before the end of the convention.

And that’s exactly what happened – despite repeated cups of tea and going through almost all those cough drops, by the last game I ran Saturday night I could barely squeak a word out.  I had convinced myself it was just the changing weather and having to shout over the din of the convention, but by the end of my last game on Saturday I realized I definitely had a cold.  So my apologies to my fellow convention-goers, it turns out I was the Typhoid Mary of this one.  I hope those who attended my games did not walk away with this horrible cold.

Despite the cold it was still a pretty good convention.  Fortunately the worst of the cold didn’t hit until I returned home Sunday night.  I’m not sure if that was just the convention adrenaline holding it back, or just good timing.  I managed to run all the games I signed up to run, and only really missed out on the late night hang-out on Saturday night, as by that time I knew I needed sleep more.  But enough about my cold, here’s a random collection of thoughts about the convention, some of which I’ll pick out later for longer posts:

The Mountain – the weather up there was crazy this year.  On Friday it was warm and sunny out, and I congratulated myself on bringing a light fall jacket instead of a big winter affair.  On Saturday it started raining buckets, and then the wind picked up.  After bringing in boxes of paranoia props I realized I left all my pens and pencils the car, but decided I couldn’t face the soaking to go out and get them.  Then it turned into some kind of sleet or wet snow, and the wind was literally making it all go sideways.  By Saturday night it was hailing, and finally on Sunday the wind and precipitation died leaving it clear but bitterly cold.  Despite all this, I still think Carnage has about the best location of any game convention I attend.  The hotel is really nice, the views are amazing, and the weird weather plus the crazy lake bridge you have to traverse regularly adds a certain ethereal mood that just jibes really well with gaming for me.

Fiasco – The one game I was signed up to play was a Friday game of Fiasco.  It went pretty well, though not as amazing as other Fiasco games I’ve played, as it meandered a lot and we had some trouble pulling the disparate parts together.  I still think that in general the bar Fiasco sets is higher than most games, so it’s a little disappointing when the game only just barely makes it up to that bar.

Checkpoint Zulu – Friday night I ran Checkpoint Zulu and I think it was about the best run of the game I’ve ever had.  I’m sure that was in no small part due to the awesome group of players I had, but also I think for once I finally stopped stressing the pacing and just let the game take the form it wanted to take.  The phone call didn’t happen until 3 hours in.  We never made it to the second day, so some of the clues didn’t make sense (eg. the fire in Kreuzberg never happened).  Never-the-less, the game found a glorious climax with two players dead, two completely insane, and two who would be haunted for the rest of their lives knowing a terrible truth that nobody would ever believe, all wrapped up exactly five minutes ahead of schedule.

Carnage Staff – The Carnage staff are amazing and seriously on top of their game.  Each year I get a personal email from someone asking if I’ll run games again (of course I will!)  This year as I arrived for my Fiasco game Friday at noon I took a quick peek at the location for my Checkpoint Zulu game later that night and realized it was not near a power outlet, which I need to run the phones.  I stopped at the desk and asked the staff if the game could be moved.  As we were at the first gaming slot of the convention the staff were naturally a bit overwhelmed handling all the little issues that come up, and while they graciously tried to help I could tell I didn’t have their full attention and honestly, my problem could wait.  I told them as much and wandered off to my game. I came back two hours later during a break in my Fiasco game to check in and see if things had calmed down.  They had already moved my game to a quiet room in the lower level (I didn’t even know that existed), printed a sign saying as much which was hung on the wall behind their desk, and they offered to walk me down right then and there so I knew where it was.  Amazing!  I cannot commend the staff that run this convention enough.

Paranoia – The paranoia game went over pretty well. I had a seventh player drop in and was able to shoe-horn her in without a problem – I just doubled down on loyalty officers and it was fine.  Dropping the competitive initiative system for a simple go-round-the-table method definitely helped keep it chugging along, and I was happier with how I ran debrief this time.  I was really happy to see the equipment guy player got into the humor of random-drawing equipment cards and all three times it delivered gold.  And finally, I decided to stick with including character generation, and it did not let me down.  Seven players made it through character creation in about 20 minutes, and were all seething with resentment by the time we started playing.  Perfect!

Mazes and Monsters – I hadn’t run Mazes and Monsters in a while, and was actually pretty excited to run it again.  By this time in the convention (Saturday night) my energy was flagging and I had given in to the fact that I was getting sick.  Despite this the game ran pretty smoothly, and the group did really well.  They really dug into the on-campus bit, with players getting up to have private side conversations and the whole thing getting quite hectic pretty quickly.  They managed to piece together the right set of clues and pretty quickly decided to head off to the amusement park, and as a result perhaps missed a few of the early clues on what was going on.  Unfortunately after the transition they started exploring less and running away more so I had to bring the heat to try and kill some of them by the end of the game.  I think as a result the end may have felt a tad bit flat as they didn’t really figure out what was going on and we ended with a few too many of them still alive and sane and wandering lost somewhere in the realm.  Ah well, it was still a decent game and I wouldn’t mind running it again if the opportunity presents itself.

Sunday – On Friday night at the social gathering I made a lot of noise about not having anything to play on Sunday, and was considering re-running one of my earlier games if I could gather some players.  By the time I dragged myself out of bed Sunday morning I knew there was no chance of that.  Despite the low energy and near inability to talk, I still ended up playing a short game of Do: Pilgrims of the Flying Temple with a small group.  It was actually the perfect end to the convention.  The game is a nice casual story game, and we managed to find a very quiet corner of the convention to play so I didn’t have to further strain my voice.  It was perfect for the amount of energy I had left, and I was glad to get to play something before hitting the road home.

Fear of a Black Dragon – On the ride home, not being able to talk very well, Adam introduced me to the podcast Fear of a Black Dragon.  The format seems to be that the hosts pick an “old school” module and discuss it in great detail.  I’ve only listened to one episode, but I was impressed and their insights actually gave me some interesting fodder for a future blog post.  I’ll certainly be listening to more of this podcast in the future.

So, that’s the summary of this year’s trip to Carnage on the Mountain.  It was a great time, despite the illness, and I seriously hope I did not infect too many of my fellow gamers.  I’m already looking forward to seeing many of those folks again in February at TotalCon.  This time I’ll make sure to bring extra vitamin-C and hand sanitizer.