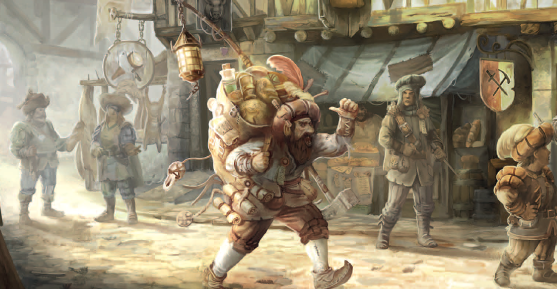 Man, a whole week with no posts — sorry everyone! The logistics for HelgaCon have pretty much taken every spare moment I had this past week. That said, as a result of those preparations I now have something to share. I’m running a Warhammer FRPG 4th Edition game at HelgaCon, and I put together a couple things that I think maybe the WFRPG4 community at large might like.

The first is this form-fillable printer friendly character sheet. I started with the one in the book, but the heavy border felt not so nice to my printer, so I lightened it up a bit. Then I pulled it into Scribus and built a form-fillable PDF out of it. There are a ridiculous number of fields, so I added a bunch of calculators to autofill the fields that are just so much math. There are still a few issues with the final product:

The sheet worked well enough to create characters for HelgaCon, so I’m going to call this good enough. If anyone wants to iterate on it though, here’s the Scribus file.

The second thing I made was a little booklet titled simply Warhammer Attack Rolls. This wraps up the ideas I posted before about criticals by splitting apart the table into two separate concepts — critical wounds and critical hits. I renamed critical hits to “Ulric’s Fury” to harken back to 2nd edition and just to have a very different sounding name. The rules and the math are more or less identical to what’s in the book.

An astute observer will point out that the odds for different amounts of damage done by Ulric’s Fury varies in the book where mine is consistent. I’m not sure there was a strong reason to keep that detail, and I think these tables read better and will be easier to use at the table.

You’ll note that all the player-facing stuff is on the first page — you can print this out (two copies per page, as it’s booklet sized), and hand a copy to each player. The remaining 8 pages are just the critical wound tables with all the noise from the other stuff ripped out, which I intend to print one copy of to have behind the screen.

I hope that’s of help to other Warhammer GMs out there. Let me know if you use it how it works for you, and what if any changes you might recommend.