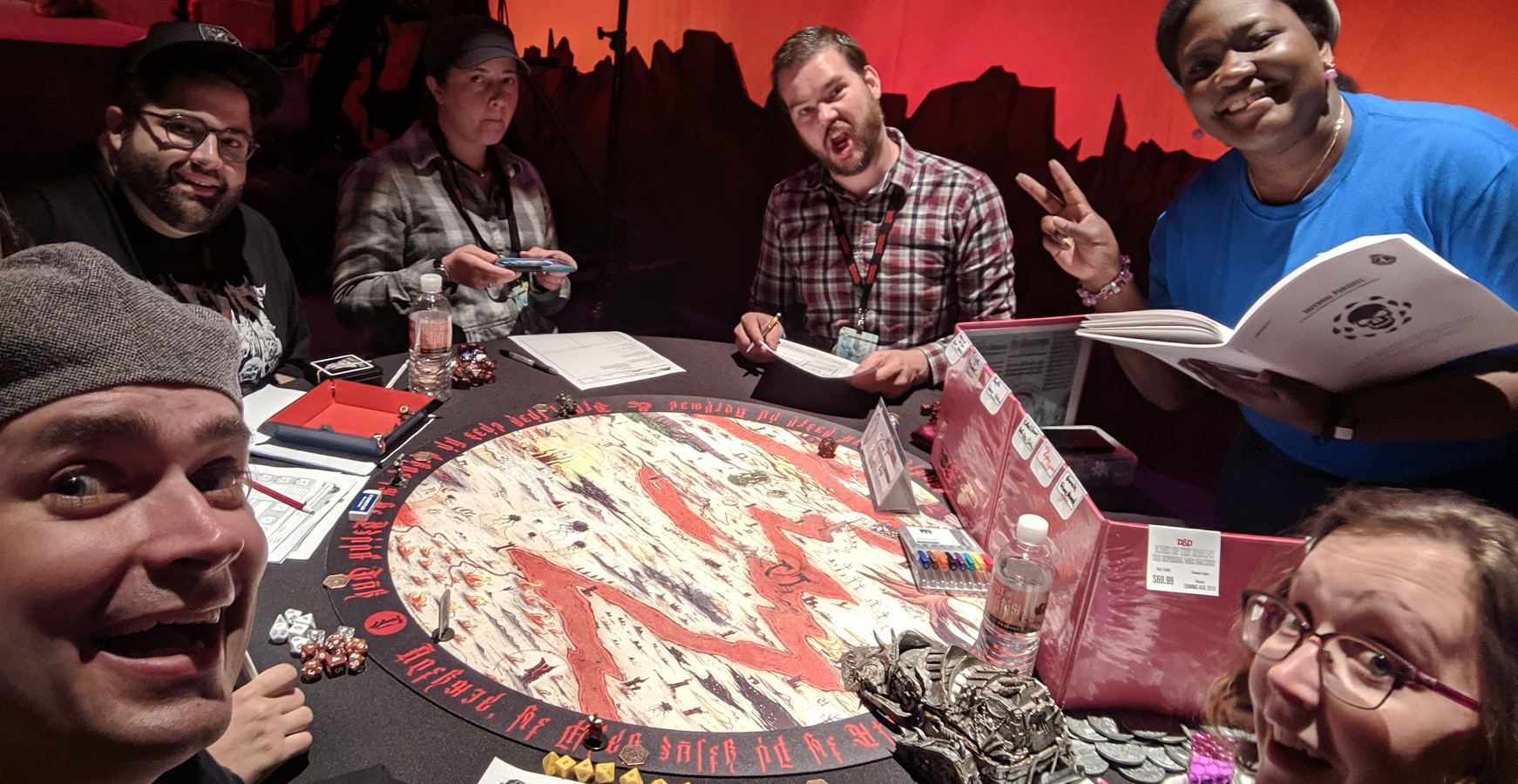 D&D Live was a really fascinating event, unlike any gaming convention I’ve ever been to. I’m not even sure calling it a gaming convention is correct. In fact, from what I’ve heard when Wizards first ran this last year as Stream of Many Eyes they were originally not going to open it to the public at all. The point was to create an event for twitch streamers, celebrities, cos-players, etc. to all present and react to new product announcements by Wizards of the Coast. To add to the hype machine they sold tickets for Sunday to tour the set, get some cool swag, and be the studio audience for some of the streams.

This year they sold badges for all 3 days of the event, and incorporated a special Adventure League game that attendees could sign up to play. The game would feature content from the new products being announced at the start of the event. Also, they created space for vendors to promote their wares, but unlike your standard convention vendor hall all the vendors had to be in costume and participate in a sort of dinner-theater-esque game. Cosplayers and vendors trickled out clues to attendees in the vendor hall all in the name of obtaining a limited edition collectible (thematically tied into the product announcement, of course.) While that kind of thing usually feels kind of cheesy to me, I think it was really necessary given the limited number of things attendees could actually do at this event. With only one actual session of play to sign up for, there was a large chunk of time remaining where we were left wondering what the heck we were supposed to do at this thing.

You’re probably wondering why the heck I even went to this. It’s not like I’m a huge collector of the latest releases from Wizards of the Coast. Not to say I dislike what they’re producing, but it takes a fair amount of effort to adapt modern 5e content back to my preferred old school systems. Note, the book they gave out – Ghosts of Saltmarsh – actually seems a pretty good candidate for such, being a collection of shorter nautically themed adventures (and apparently some are adaptions of the old UK modules?). I’ve only skimmed it so far, so a full review must wait for another time. All that said, there’s so much great content out there for me, from collecting the old modules to what the OSR is currently producing, I’m personally not terribly inclined to put in the effort to parse 5e books into something I can use. My personal preference for short and sweet printed material like that produced by the One Page Dungeon Contest is certainly in sharp contrast to what’s on display in Wizard’s latest offerings.

Life dropped this one in my lap though – I was already in L.A. for work, I managed to finagle a free pass, and as you’ve seen in this blog I’m really interested in the whole streaming thing. In fact, it’s the last bit that I was really hoping to see more of, and I have to say I was just a little bit disappointed. If you look at the website it talks about there being 4 studios each with a schedule of various streamers throughout both Saturday and Sunday. It turns out these studios were behind glass windows on the other side of the vendor hall. We could see them, but we couldn’t really hear what they were saying. It was more like we were their background rather than their audience. I guess I could have watched the stream on my phone, but I’m not sure what the point of that is – I might as well do that from home. I was kind of hoping for more chances to sit in an audience and watch live recordings, and maybe even have a post-stream Q&A or panel or some such. Sadly that was not on offer.

There were a couple shows with live audiences. The event opened with a 2-hour episode of Relics and Rarities, which was pretty entertaining. On Friday and Saturday nights there were other celebrity live play shows featuring elements from WotC’s upcoming release Descent Into Avernus. I’d say these were actually less good as the celebrities were a mish-mash group, meaning they had no pre-established rapport with each other, and the content of exploring hell with strange diesel-punk like vehicles lead to some pretty strange content. After the shows the celebrities were all quickly whisked away into private green rooms, and though some did hold separate signings, I’d say the opportunity to “mingle with D&D partners” was more limited than the site seemed to suggest. Not that I care about chatting up celebrity D&D players, but rather I was hoping for some amount of glimpse behind the curtain on what it was like to produce or participate in some of these live streams.

I did see a little impromptu gaming. We got our hands on a copy of Dungeon Mayhem and played a round of that. It’s a pretty fun little game, great for a pick-up or summoning game. At one point I did see a random attendee drop a DM screen on a picnic table and run a quick pick-up game. I think that’s pretty cool, and as this event grows I’d encourage the organizers to make more room for that sort of thing. More so though my feedback would be to add more studio audiences to the streamers who are streaming from on site. I think both the attendees and the streamers themselves would get a kick out of that, and it would make the overall event feel like there’s more going on. It would be a little more PAX or ComicCon of a direction than say a GenCon direction, but I mean they already have GenCon itself for a big gaming convention.

Finally, let’s close this out with a photo of me at the premier of Godzilla: King of the Monsters with a look on my face that I think pretty well reads “how the hell did I get an invite to this?”