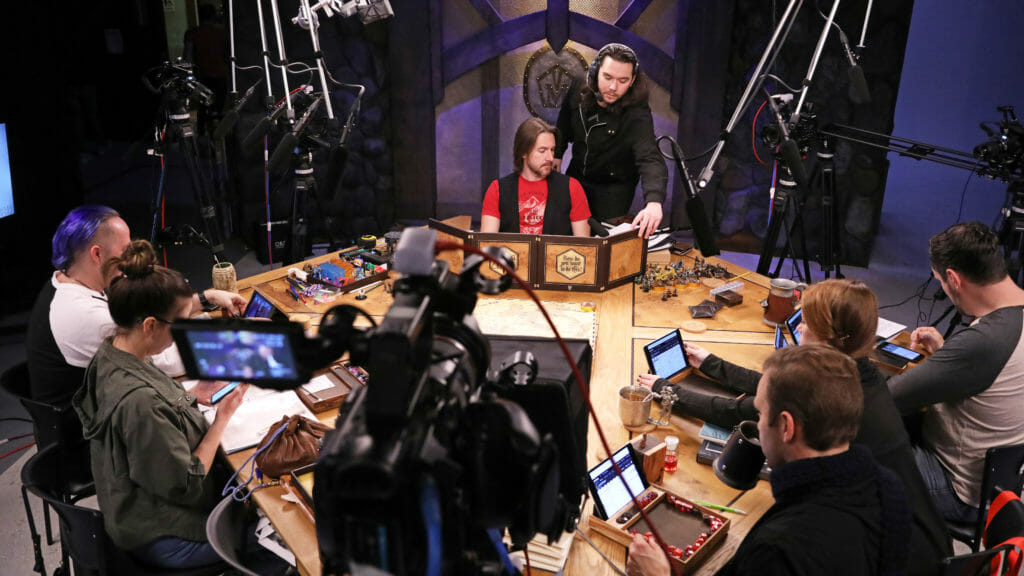 My good friend and fellow gamer David send me this link to a show called “How to be a Great Gamemaster”, at a specific point where the host is talking about adapting your game to the players’ actions. He proposed the idea that this is de rigueur for modern gamers, that there is an expectation that the DM is there to serve the tastes of the player. What were my thoughts?

Well, I certainly agree with him that it’s a good topic for the Wandering DMs to cover, but I also wanted to think about it out loud a little here first. In fact, I found myself reacting to an awful lot in that video, and generally not in a very positive light. The software he’s showing us makes me groan, which in turn makes me want to talk about how we go about game prep in general, but let’s start with a grounding in the question David asks — what is the DM’s role? Are they the director of a film, a concierge / tour guide there to show the players a good time, or just one more player of a game with a slightly different role than the others?

I’d argue strong for the last choice. In a video game metaphor – imagine that everyone at the table is playing single multiplayer game together, but the DM’s game is more like an RTS, while the players are playing an FPS. The DM’s view is a mile back, while the player’s view is nose-in. The DM is thinking many turns, days, even game-weeks ahead, while the players are wondering what their character had for breakfast. Ultimately though, we’re still all playing a game together, and I think the DM should get as much enjoyment out of the experience as any other player. The DM is not there to direct the players or to entertain the players, but rather to take an active role in playing with game mechanics and building a shared world and story with everyone else.

Now sure, everyone, DM included, is performing for the rest of the table a little bit. Every time we make a funny voice or crack a joke, we’re performing to the rest of the table. And of course this totally gets amped up if you’ve got cameras and/or microphones at the table. But I’d argue this is just a detail, an aspect of play like rolling dice or making tactical combat choices, which while sometimes fun is not the core of anyone’s purpose at the table.

In general, I think as DM between games I should be acting more like a scientist than an author. I am there to make sure the world follows the natural laws governing it and that the NPCs behave in a way true to their character. If the players are tracking down where the orc raiders came from, then I should think about the orcs’ motivations and prior actions, and create reasonable content – here is their cave, here is how their leadership is structured, and here’s how they’d react to certain world events such as a powerful party of humans invading their lair.

I should not be thinking things like “here’s a scene where they get ambushed on the road” and “here’s the big climax scene where they discover the orc boss is controlled by a demon overlord.” Those details can all be true — the orcs may raid the road and their actions may ultimately be directed by a demon, but I can create that content without necessarily dictating or assuming how the players will interact with it. Likewise, I should be ready to chuck much of that out the window when the players decide instead to travel to the next town over and avoid the orcs completely.

I’m not saying you should chuck your hard-created material simply because the players weren’t interested in it, and you’re the servant of their entertainment. But rather you should be ready to adapt the world and the content you create to the actions of the players – because frankly that’s the fun part! Seriously, as DM what I enjoy the most is watching the players do something unexpected and then being presented with the challenge of figuring out how that effects the word and the NPCs in it. Then I can take appropriate action and serve the ball back to the players, and thus we go back and forth playing the game.

For example, perhaps the players do avoid the orcs and move on to the next town. Well then, I guess there’s nobody to defend the trade along that road and the orcs grow rich raiding it. Maybe the demon then orchestrates an invasion on the town they left behind. “Oh no, Old Town has been completely raised by an orc horde! We’re next!” cry the locals in New Town. What do the players do now? Do they continue to flee? Do they organize a raid on the now enemy occupied Old Town? The latter sounds like a really fun adventure, and guess what, I’ve already prepped half of it when I made that orc lair last week. I know how many orcs there are, I know how they’re organized, and I know where their commands are coming from. I even know the goals of that command, and can therefore start to imagine what would happen if a carefully orchestrated strike took out the orc boss. All I have to do now is map out some city locations and reseat some encounters at these new interesting locations.

Maybe along the way I invent a new encounter — a band of resistance fighters hiding in the cellar of an old tavern. Maybe they players will encounter them and maybe they won’t, but either way I just introduced a new interesting group of NPCs into my world. Next week I’ll be thinking about what the players did in their raid on Old Town, and how that affects the band of resistance fighters, and what they may do about it. But that’s as far as I’m going to let myself think about that, because again I’m not trying to create “scenes” of content that rely on specific outcomes. I’m creating characters, documenting their goals and resources, and then through play deciding what becomes of them.

Anyway, those are my thoughts on that. Does it sound like I have plot and strong story beats? I’d argue I love that stuff, but that I expect that to be the outcome of play, not the set up. I want to play with my players to discover the exciting story of the world we share equal parts in forming.

5 thoughts on “The DM’s Role: Player vs. Performer”