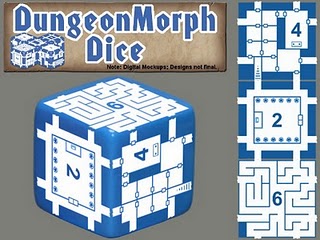 I’m pretty enamored with the idea of geomorph printed dice, which I found out recently from Grognardia and Dyson Logos’ blog.  Apparently they’re trying to drum up funding for the project, and as of right now they’re pretty close to the half-way mark of their $6500 goal.  I love both the concept behind the system for drumming up enough money to actually make a batch of these (anyone whose ever tried to manufacture anything in small quantities knows how cost-prohibitive it can be), as well as the actual product they’re trying to make.  So I couldn’t help but drop some money into their hat.

Best part is, you only have to pledge $20 to the cause to get a full set of the dice when they’re produced, which I think is a pretty reasonable price for what they’re creating.  So why not head over there and drop some cash on this project?