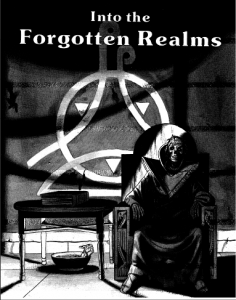 OK, it’s almost a month later, time for me to put a cap on the HelgaCon reports.  My last game was an AD&D tournament: Into the Forgotten Realms.  Originally run at GenCon 1984, this module was written by Ed Greenwood at a time when Forgotten Realms wasn’t nearly as recognizable as it is today.  There were no novels, no comic books, and not even a D&D campaign setting for the Realms.  The only people who might recognize the name would be readers of Dragon Magazine, where Ed regularly talked about his home campaign in his column, and the players of that home campaign. Eventually this module was printed in Dragon Magazine #95, which is the version I ran.

The text tells the GM that “the accent in this module is on roleplaying and creative problem-solving”.  However, the module then presents a pretty straight forward dungeon crawl, albeit with some interesting clues about the final encounter.  The text also informs us that “it will become apparent to most referees that the characters could be easily destroyed by the single most powerful monster in this dungeon.”  The point is not to fight it, the point is to come up with clever ways around it.  OK, I guess I can’t dance around it, I’m going to have to spoil the adventure for you to talk about it.  Turn back now if you don’t want to know.

As may be apparent from the image, the final monster is a lich, and an insane one in this case.  However his insanity is such that he will be reasonably friendly to the players, giving them ample opportunity to come up with a clever way of dealing with him.  The tournament even awards bonus players to a player for “devising a method of dealing with the lich without causing it to attack the group, and having that method adopted and used successfully by the party.”  But what does “dealing with” the lich mean?  Getting out with your skin, or actually taking the thing out?

Fact is, I don’t think it would actually be all that hard for the party to take on the lich.  Sure, he’s got some nasty spells, but a well placed Silence spell in the narrow confines where that combat is likely to take place would prevent that.  Sure, he’s got plenty of hit points, plus a paralyzing touch attack.  But the party has 10 characters, plenty I think to absorb enough of the lich’s attacks to whittle down his hit points and take him out.  Perhaps that’s the kind of planning the author expects though: corner the lich, toss a Silence, maybe a Prayer and Bless to up the paralysis saving throws, and have at it.  Personally, I find it much more interesting if the party comes up with some other way of neutralizing the lich.

It’s an interesting group of characters in this game too.  Every last one of them is human, and none of them has a single magic item (except maybe a rock with continual light cast on it).  Their stats though, they would have even made 12-year-old me blush.  Two fighters with exceptional strength, and everyone with at least half their scores above a 16.  Seriously, despite the lack of magic, this group had enough hit points and combat pluses that I think they’d be pretty well positioned to take on a lich.

Both times I ran this game we never really found out.  My first group (TotalCon), with only 4 players, decided to attack in a blaze of glory, and ran out the clock just as they were about to meet their doom.  My second group (HelgaCon), tried their best to seal the lich into the underground, dispelling the magic bridge across the chasm and blocking up passage-ways behind them.  I don’t believe I awarded the “dealing with” the lich bonus points in either case.

The scoring system in itself is interesting, awarding points by player rather than to the group at large.  This jibes pretty well with my memory of playing such games at GenCon back in the early 90’s, but is very different from the tournaments Delta runs where the entire group gets a score.  As I was not running multiple sessions of the tournament, I liked the idea of having a winner at the end, and even bought a couple copies of Dragon Magazine #95 to hand out as prizes. However, the scoring system is a bit odd.  It gives awards for various clever things like searching specific areas for clues, theorizing the existence of the lich well before he’s encountered, and volunteering to go first in the most dangerous areas.  However, there’s also some points that can handed out by player votes for “the best roleplayer”.  Likewise, the GM is given some points to hand out to the best roleplayer.

Some points?  Who am I kidding, the number of points given to the GM to hand out to the 1st, 2nd, and 3rd best roleplayers are so lopsided that he might as well just pick the winner.  In both cases I decided to ignore these points.  I did let my players vote for their choices, but I took a pretty liberal view of what “best roleplayer” meant.  I encouraged my players to simply vote for the person they felt contributed most to the game, whether it be through contributing clever ideas, portraying an interesting character, or just rolling the most 20s.

In the end though, I still felt kind of bad for all the “losers”.  This is a team sport, how can one player win and everyone else lose?  Ultimately, I don’t like ending on this slightly sour note, especially in a module that I think is otherwise a heck of a lot of fun.  It’s got a clever mystery to figure out without being all about the mystery, if you know what I mean, and it’s pacing is perfect.  I ran once with 4 players and once with 8, and in both cases they explored about 90% of the place in the allotted 4 hours.  There’s a good balance of combat and problem solving, and two or three different NPCs they can actually interact with in ways that don’t involve stabbing (or at least don’t have to involve stabbing).

All in all, I’d say a very fun module.  I’d be curious to run it again using Basic D&D or even OD&D with all the house rules I use these days, especially my interpretation of the Silence spell.  As a module, I’d say it’s top notch.  The tournament stuff, well, just ignore that part.

6 thoughts on “HelgaCon: Into the Forgotten Realms”