It was technically Saturday when I returned from my Friday night game, and I just new that my 9:00 AM game was in trouble.  It was a Hollow Earth Expedition game, which I’m still curious to try some day, but just didn’t seem worth getting up early for.  Before going to bed I flipped through the catalog to see if there was maybe a 10:00 AM game I could get into with generics.  Lo and behold, the DM who I played A1 with on Thursday was running a game, in fact it was A4.  If you recall, another GM was running A4 when I played A1, and I knew my GM had the other group’s score.  Here was a chance to play an old tournament module, and actually compare my score to another group that played the same module at the same convention!  I jumped at the chance.

I met there with John who was also looking for a game to get into as well as another guy who had been in my Friday night game.  We all had generics, and we worried that enough pre-regs would show up to block us out.  The DM said he had 9 spots and was sold out, but as a DM I can say that all my games were sold out during pre-reg and yet I usually got 50-75% of them to actually show up.  In this case we really lucked out — 6 prereg’s showed up and all three of us just made it in.

And what’s more, we kicked that module’s ass!  There was some inter-party tension at the start.  If you don’t know the module, the premise is that you’re taken prisoner, have no equipment, no spells, and have to escape.  Some of the players, likely less steeped in old school style play, actually wanted to fight the monsters we encountered.  The rest of us knew better and ran away at the first sign of trouble.  However, that same bravado is what would let us beat the module in record time.  One player took it upon himself to explore some underwater tunnels, which I highly recommended against, and through some lucky choices actually found a way out.  We finished the module an full hour and a half before it was scheduled to end.

As for scoring, I think the other group actually managed to beat us by about 10 points, though likely simply because they encountered more stuff.  I bought the module (one of my auction acquisitions), so I intend to rescore us myself from my memory of how we performed just to double check, but with only the raw score to go on for the other group, I don’t know if that might contain any errors.  Yet another thing for me to post about in the future.

My afternoon games were less enticing — a D&D board game at 4, and then a warhammer skirmish game at 7.  I was slightly more interested in the latter, but my luck with miniatures games at GenCon is so bad I decided to just skip both.  Tova and the charity auction were at the same time, plus there was cardhalla, and I still needed to bump into Tim and Frank.  Oh and the party Bob invited us to.  The best and worst part of GenCon is how much is going on!  So much to do, and never enough time to do it.

So, let’s start with Cardhalla.  Here’s a little before shot for you I took while passing it one day: 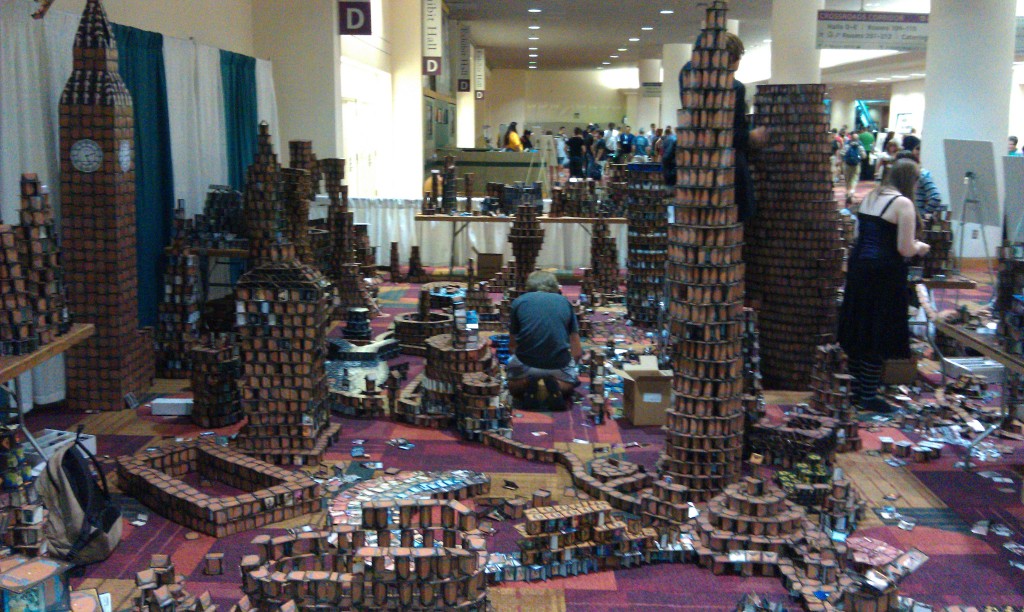 And here’s a video of the eventual destruction:

And then there was the auction.  I will devote a full post to the auction in general and what I bought, but it’s worth mentioning that Tova was as usual absolutely hilarious.  This will have to become a regular feature for me at GenCon.  I don’t think I laughed as hard at any other convention event.

Also, I finally got to bump into Tim and Frank.  Why was I so eager to bump into them?  Well, last February I met Tim at TotalCon, and got to play in several of his OD&D games.  I happened to have with my what I use as a source book for these games.  You may know I dabble a little in bookbinding.  Well, for fear of damaging my precious LBBs, I obtained some copies of them digitally along with all the supplements, printed them out, and bound them up in a single hard cover volume.  Probably a pretty liberal treatment of the fair-use copyright clause, but I figure I did pay for originals, making a back-up copy for my own personal use wasn’t a big deal.  It’s not the prettiest book, but it works well, and when Tim saw it, well he wanted one.  Again as I know he’s got the originals, heck he was the original editor of a lot of that work, I had no qualms making him one.  But I couldn’t just make him a scruffy copy like I had, so here’s what I created: 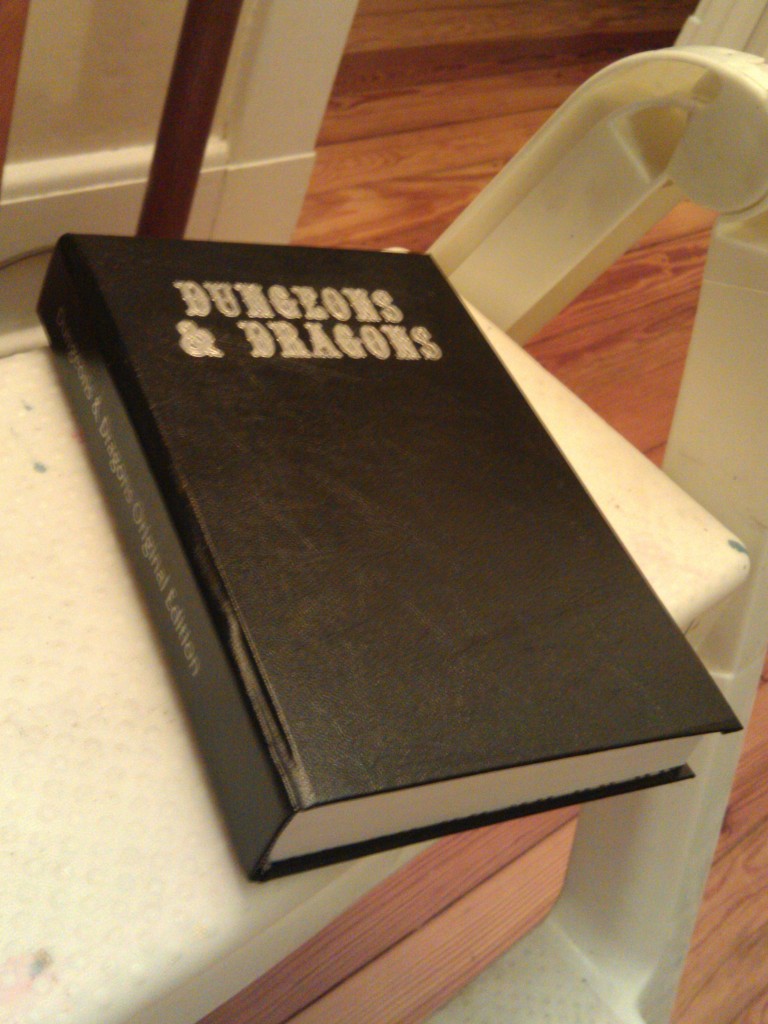 It’s a fake leather material for the cover, with a metallic silver plastisol ink title screen printed on the front.  I even put headbands on the text block, though I don’t think you can make them out in the picture above.  Sadly, I didn’t take any more photos other than the one above.  Wish I had remembered to do that before handing it over.

Also, I didn’t make one, but two of these books.  The second was in red-brown leather, and given to Frank.  It just seemed appropriate that he should get a red book.  Tim and I let him sweat it for a bit before revealing that he got a book too.  Both gentlemen were very gracious, and demanded that I inscribe the fly-leaf.  I don’t recall what nonsense I put in there.  I hope they enjoy the books.

Before anyone asks, no, I won’t make you one of these.  They are border-line in their legality, and a lot of work to produce. What I can say though is that home book-binding is a surprisingly cheap and easy to get into hobby, and I’d be happy to share the techniques I’ve developed with anyone interested.

Tim also presented me with a very nice gift in return — a preview copy of one of his upcoming works “All is Not Well in Buskidell”.  He graciously inscribed it as well, and mentioned it would be quite valuable on eBay, which I scoffed at.  How on earth could I put such a treasure up for auction?  That’s a job for my heirs.

And that was my Saturday night.  Totally forgot to go pop by Bob’s party by the way.  Wish I had remembered it, but oh well, I had a blast no matter what.  Can’t wait for next year.  Until then, there’s TotalCon and HelgaCon to look forward to.