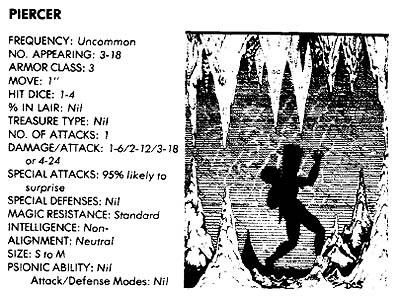 Let’s talk about a classic D&D monster: the piercer.  For those who don’t know (c’mon, go get your monster manual out), this is a monster that basically looks like a stalactite and hangs out waiting for its unwary victim to walk underneath it and then drops down to impale the poor sap.  I had one of these show up in the AD&D game I ran last HelgaCon, but it made only a very brief appearance.  The thing missed its target, who happened to be standing on a ledge above a massive chasm, and thus disappeared into the blackness below never to be seen again.

Now let’s get one thing straight, I actually rather like this bizarre monster.  Players never think to look up, and you can only throw so many giant geckos and giant spiders at a party.  However, I have a logistical problem with the thing.  Basically, the question is, what happens on round 2?  Whether the thing hits or misses on its surprise attack, what happens next?  Does it continue to attack?  If it missed, what form does that attack take?  If not, what happens to it?  Does it just lie there and take a beating?

Anyone have any experience with these things, any good stories to share or advice on how to run them?

8 thoughts on “Piercer, I hardly even knew her”