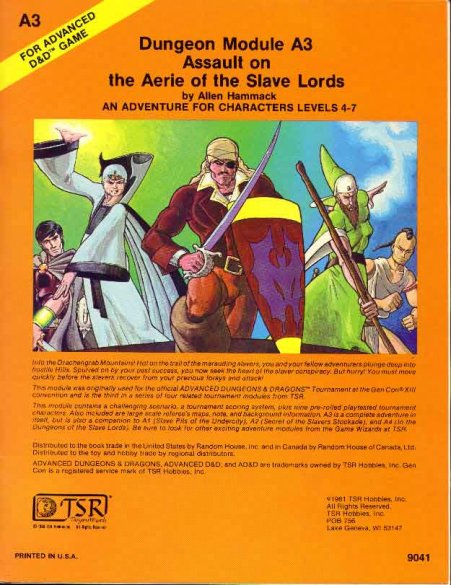 A3 strikes me as the most unusual of the series.  Broken into three parts (A, B, and C), the first part is the last of the five tournament first rounds, and the second two parts form the semi-final.  It follows the same mechanism as A2 for indicating what parts of the map are not part of the tournament, but interestingly the only addition it seems was made for the campaign version is a single secret tunnel in part C.

Similar tunnels were found in A2 which I guess to be intended as some explanation for how the heck the main bad-guys get in and out of these convoluted death-trap lairs.  I suppose it’s easier when writing for a tournament and you needn’t bother think about what if anything is beyond the last room.

Part A is typical of the first rounds.  Some very interesting rooms to get through in a surprisingly linear progression.  Amusingly there are a couple places where there are several exits from a room which either dead-end, lead back to the same room they left, or join together with the one correct passage to the next room.

The semi-final is broken into two parts each with its own map.  Part C is much like part A, and other pieces of the entire series, being an underground dungeon with various traps, puzzles, and monsters to contend with.  Part B is the odd bit.  Apparently the semi-final starts with the players finding the city of the slave lords (the titular ‘Aerie’), and knowing they must find the secret underground passage in the city that will lead them into the final stronghold.  Part B consists of the entire city, with short descriptions of every building.  There are a few clues here and there as to the location of the entrance to the underground, but most buildings are dead ends.  Given that the scoring for the semi-final is based completely on the number of rooms in the underground explored, the entire thing seems to be nothing more than a massive time waster.  The best way to score high in the semi-final is to find the entrance as fast as possible and get into the underground.

It makes me wonder if part B was really part of the tournament at all.  Given that part C is exactly the same number of rooms as part A, it seems odd to have this bit in here at all.  Don’t get me wrong, it is kind of cool and would make a great sandbox in which you could spend a lot of sessions.  This seems another argument though for it being included for campaign play rather than for the tournament.  The text does seem to indicate it is part of the tournament, but little guidance is given in just how to run this.  A blank player map is included, do they just point to which building they want to check out and the GM runs it from there?  Should there be potential to get in trouble right in the streets?  What happens if the party gets in deep and the citizens and/or guards overwhelm them?  I don’t care how powerful a party may be, a city full of enemies is going to take them down relatively quickly.

Perhaps the idea is that by this point the participants have been whittled down to the most superior players, who know better than to dicker around when there’s a secret passage to be found.  This is the semi-final after all.  Still, for all the effort I’ve read about being put into making sure the tournaments were fair and equal for all participants regardless of DM, this part strikes me as pretty contradictory to that goal.  Different DMs could really run quite differently with the semi-final, and I think even a good party might find themselves running out of time if they had an inventive DM who might enjoy elaborating on this part.

Another interesting thing to note about the semi-final: the pre-gens have changed slightly.  Two sets of pre-gens are included in the module.  As far as I can tell, the only difference between them is some slight changes in inventory, especially around the magic items.  It’s an interesting nod to consistency, assuming the party used up their expendable magic items in the previous round so shouldn’t have them in this round.  Again it pushes that interesting feeling of a consistent narrative — that many groups were simultaneously attacking the slave lords but that this group is the one that got through.  It works to a degree, provided you ignore the fact that every group consisted of the same characters.  It makes me a little sad, as I know it’s the bit I could not replicate with a modern re-running of this tournament.  I doubt we’ll ever see another case of a massive convention running hundreds of players through a single consistent multi-round tournament.  Sigh.

Someone get on that time-machine already.  I want to go to GenCon XIII!

1 thought on “Tournament Modules – A3: Assault on the Aerie of the Slave Lords”