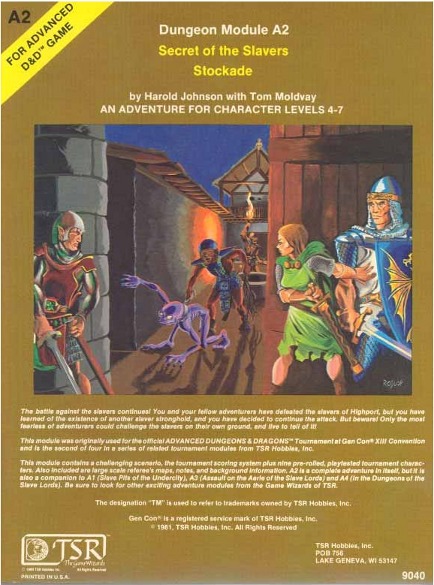 And filler it really is.  The rooms that are added for the campaign really don’t add much, in my opinion.  The two sections include an above-ground fort to be raided, and the undergound passages below it.  They are tenuously connected by main bad-guy characters and some secret passages, but I have to wonder in reading this if the underground was even really envisioned as being underneath the fort at all in the original tournament.  The fort adds a bit more for campaign play, in as much as the assault entry point in tournament is very linear and the module offers several other approaches to entry not possible in the tournament.  The underground portion remains fairly linear, with or without the extra material.

I suppose ultimately for campaign play the filler is exactly what you need.  The tournament material is pretty linear, with a few places appearing to have choice of direction but usually one choice quickly terminates.  In campaign play the players need a chance to go the wrong way, find some stuff that’s unimportant to the main plot, maybe find alternate paths to the goal locations.  Ultimately I don’t begrudge the authors the additional material, but it’s not why I’m reading these modules, and I find myself skimming it pretty quickly to get on to the next tournament location.

All in all I’d say this module feels the weakest to me in the series.  The set pieces don’t have quite the impact of the stuff in that first part of A1, though they are still much better than your average module, and the linearity of the adventures seems much more apparent.  Now maybe my perception is skewed because I didn’t actually play this one, and I think I will still try to find an opportunity to run these.  The effort to link the two parts seems a little more ham-fisted, but it’s also hard to see how the second part stood alone in the original tournament.  Perhaps that just means the underground of this module is the weakest of the five first rounds.  Still, I wish I could have seen the original tournament write-ups before they were coddled together into these modules.