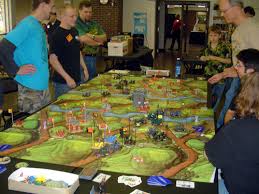 In the early 90’s, Games Workshop teamed up with Milton Bradley to create a couple games using GW’s IP but stripping it of their branding and making the whole thing a bit more approachable to the novice.  The results were the hugely popular Hero Quest and Battle Masters, the former a dungeon crawl style board game and the latter a simplified version of a classic tabletop miniatures wargame.  Hugely popular is perhaps a bit subjective, I have no data to back that up, other than the fact that everyone I talk to has heard of these games, and they seem to continue to have cult followings on the internet.

I remember attending the GenCon when Battle Masters was released.  I don’t remember at all who ran the booth demoing it, whether it was branded GW or MB, but I do remember the three huge tables set up such that anyone could stop by and play a game (but maybe had to wait their turn depending on the time of day).  I know having demo tables like this is a common place practice at GenCon these days, but back then it was kind of unique, and I think remains so in the fact that it was pretty much unguided.  The tables were there, and if you felt like playing, you had to figure it out.

This was made easier by the fact that at the booth itself someone was handing out free copies of the instruction booklet to anyone that came by.  This combo strikes me as brilliant marketing.  I took a booklet back to my room, read it over, and by the next morning was at the tables waiting my turn to play.  I was so taken by the game that I actually bought a copy and brought it home with me.  This was no small feat given that A) I was pretty young at the time, and probably didn’t have a huge amount of spending money to blow on games, and B) I had come via plane and had to bring this enormous thing home with me.  It contains over 100 30 mm plastic models and a 5′ square vinyl mat instead of a board.  The box itself is the second largest game box in my closet to this day, beat out only by the Kickstarter edition of Ogre. 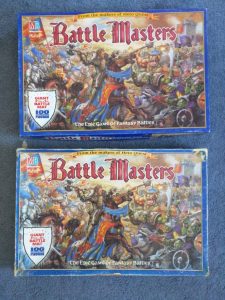 So not too long ago Jenn informed me of an estate sale someone had told her about where there were a bunch of games.  We went, and sure enough there were some really pristine copies of both Hero Quest and Battle Masters there.  Now, I already own both these games, and even though the collector in me marveled at their condition, I held back and instead bought a couple of old Avalon Hill games I didn’t own.  I’m a game player first and a collector second, but sometimes I have to fight the demons within to enforce that mentality.

And then wouldn’t you know it, those two games went unsold, and through the friend of a friend channels I was asked if I would like them both at half price.  Sigh.  Of course I bought them.  On the left here you can see my original 1992 copy at the bottom, thoroughly well played and beaten, and above it my new estate sale copy.  Yes, I admit it, I’m an addict.

The problem with this game is also one of its big attention grabbing selling points — it’s really huge.  I mean, I’ve never owned a table big enough for this game, and have thus always played it on the floor.  It’s fun, but it’s kind of a pain in the ass to drag out and set up.  So now I have two copies sitting in the closet with little chance of ever being casually brought out and played.  What’s the answer to this?  Why, a third copy of course.

As I was standing in my gaming / crafting room thinking what a shame it is that I haven’t down any miniature painting or other such stuff in over 2 years, the idea struck me to build a custom shrunk down copy of this game I love so much.  I have a ton of 10 mm fantasy miniatures that were my latest painting passion.  It seems counter-intuitive, but I find them easier to paint than the larger 30 mm models, simply because there’s really not very much detail you can even bother with.  So what if I rebuilt the units using 10 mm guys on little hand-made stands about 1.5″ x 1″, and expand from there, how big would the board be?  The answer is about 2′ square, certainly small enough to fit on my dining room table.

I still have a lot of details to figure out (how will I create the board, what about a box to hold everything, etc), but I’ve started in on the project.  I have no idea how long it will take me, and honestly I don’t much care.  Far too often with projects like this I have my eye so fixed on the end result that I don’t really get to enjoy the process of creating it.  This time, I’m trying to reverse that.  I mean, once the thing is done, what have I really gained?  A third copy of a game I rarely get to play.

So, expect to see more posts in the future as I start to put this thing together.  The units are the easy part, I’ve already got models laid out and have started cutting up some MDF to make bases.  I have a couple ideas on the board itself, but I’m not committed to anything yet, and I’m waiting on some materials to arrive to do some experiments.  Now, to go paint some minis!