Looking back on my thoughts on mapping I realize I never really came to a satisfactory conclusion.  It feels like it deserves more thought, so, let’s analyze what it is I like about mapping:

Mapping is one of the few things we do in real life that directly mirrors what our character does in game.  I’m trying to think of others – talking is obviously one, and I suppose if the DM brings in a physical prop that the players use or manipulate that could be another example.  But mapping definitely adds a unique layer of immersion to the game that brings some element of our shared imagined world into physical reality.

The end result of mapping is one of the few real artifacts of play.  This is satisfying on a variety of levels.  The map can be reviewed to trigger memories and re-enjoyment through reflection.  It can also become a physical prop in later play.  I once had a player whose character was the map-maker get separated from the party and then die alone in the dungeon.  I collected and stored his maps, and then much later I had another group exploring the same dungeon come across his body and thus gain back the maps. It was a pretty cool moment, especially as the original player was no longer with the group and we had some new faces as well.  Maps are always a great hand-out, but maps made by an actual player full of discrepancies and unusual notes took it to a whole new level.

3. It is a tool for strategizing.

If we accept the premise that old school play is chiefly about exploration, then a tool for deciding where to explore next, or how much to explore before retuning to town, is crucial to effective play.  I think one of the biggest pay-offs as both DM and player is when the group reaches that point where they feel they’ve fully explored one direction and then huddle around the map to discuss where to go next.  It’s one of the few moments where the entire table is fully engaged in a truly shared cooperative activity.  I mean, I guess you could say combat fulfills that as well, but while there is cooperative tactics at play in combat, it rarely engages every single player, and usually there’s someone at the table that’s just waiting for their turn.  On the other hand, I’ve rarely seen map analysis that didn’t involve the entire table.

4. It is a tactical tool for discovering secrets.

Secret doors – some of us love them, some hate them.  Personally I like hidden areas so long as the game does not hinge on their discovery.  But let me be clear here — I’m not saying that I’m expecting players to keep a highly accurate map to detect exactly which square holds a secret door.  Rather, even if the map is rough it can be used to locate large gaps and direct generally where one might search for a hidden space.  For example, suppose the players have drawn the following map: 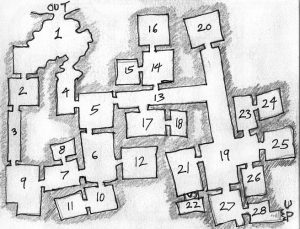 Even without scale and assuming the dimensions are sometimes off and that inaccuracies exist, I think we can all agree that there are some places that are better to search for secret doors than others.  I’m looking at the south wall of 12 and the east wall 10, or north and west of 8.  We don’t know for certain there’s a secret door there, but I’d spend time searching room 3’s eastern wall well before I wasted time searching any of 7’s walls.

Those are the major benefits of mapping as I see them.  I’ve already posted about when exactly mapping gets frustrating for me as DM.  So I suppose the question is, are the frustrating moments just the tax we pay for the above benefits?  Or is there some way to alter this part of the game to get more of the benefits and avoid the frustrations?

I’m starting to lean towards the former.  I think there are probably certain behaviors I can practice as DM to at push the activity in the direction I want.  For example, using more vague language when describing dimensions and distances to push away from the fact that we’re both drawing squares on graph paper.  Or when a player starts getting antsy about wanting to be sure their map is showing exactly the right dimensions asking “how does your character precisely measure the room?”

My point there would be to lean back onto the immersive quality and away from the tactical.  I could imagine certain players being annoyed with that kind of response, at which point I suppose it comes down to taking a moment out of game to talk about all the points above and make sure we’re on the same page about where the enjoyment of this game really lies.

Which I suppose brings it all back to simply “know your players.”  One of the down-sides to convention play is of course having to navigate the DM/player relationship building over and over again in very abbreviated time spans.

Did I come up with a solution in this post?  Perhaps not.  Perhaps more I’ve simply found acceptance.