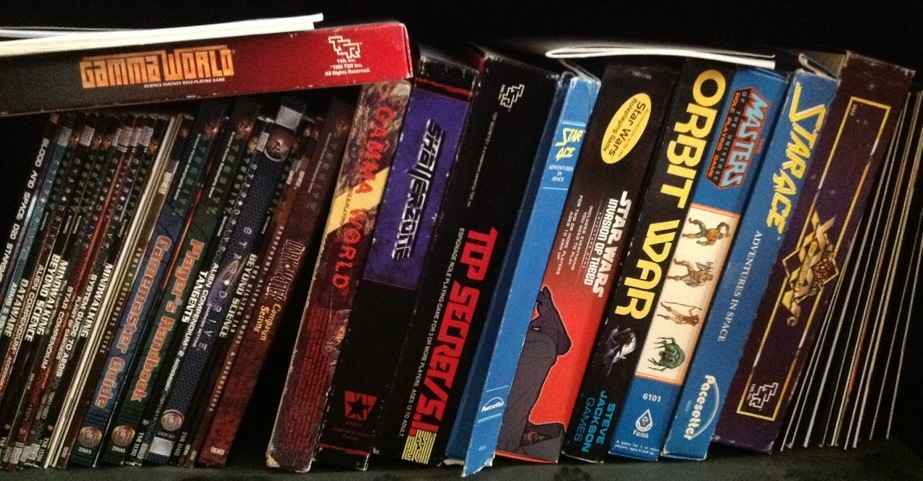 One day left in the Insanity Cards Crowd Sale!  Yesterday I posted about how to adapt these cards to a variety of different roleplaying game systems.  As much as I wish it weren’t true, it turns out there are many roleplaying games that I don’t own, some of which include an insanity mechanic.  So how do we use Insanity Cards with those games?  Here’s a little dissection of the Insanity Cards mechanics, and some thoughts on how to tweak the rules so you can adapt them to your system of choice.

Most insanity systems include some kind of points.  Sometimes it’s like an alternate health stat, like in Call of Cthulhu, where you have a pool of sanity points that drop until you go completely mad.  Others, like Warhammer FRPG, count up, and when you reach a threshold you go a little mad, and maybe the counter resets.

Insanity Cards themselves are a bit similar if you consider each draw of the card a point, so much of adaptation of these systems is figuring out how many points should map to a card draw.  In Call of Cthulhu I recommended around 5 points to 1 card, while in WFRPG I’d use 1 point to 1 card.

The maximum end of the Insanity Card scale is 36.  There are 6 different insanity cards and you can play 6 cards on each (1 Tell and 5 Descents).  So you could start by just dividing the max insanity points in your system by 36.  Thus a system that caps at 100 points probably wants one card draw for every 3 points.

But systems like WFRPG have no theoretical maximum, so instead perhaps it’s better to look at minimums – ie. how many points you can absorb and suffer no real effects.  For Insanity Cards that number is 6 – if you’re lucky you can have all 6 Tells on the table and still be showing no mental duress.  Note how that maps directly to WFRPG’s 6 insanity points before you have to start making checks.

Something a lot of systems attempt to handle is pacing of insanity.  Most systems do this by including some kind of skill check – roll Willpower or Guts or whatever to avoid going insane.  Now, recall that a major point of Insanity Cards is to allow the players more direct control over this.  I think that’s important, I’ve played plenty of Cthulhu games where lucky dice kept me aggravatingly sane throughout the entire game.

Remember that 6 card buffer I talked about above?  Sure, you could play all 6 Tells and have no effects.  But you can also play 1 Tell and 5 Descents and be completely bonkers.  There’s a fair amount of give in the system with just 6 cards.

This is where I’d look at what you expect the overall duration of your game to be.  If you’re playing a one-shot or convention game, I’d recommend ditching other pacing mechanics like skill checks.  Let the cards do their job as written and after 4 hours of play some of your players will be level headed and others will be completely bananas.

If you’re playing a longer campaign, or you just want insanity to be more rare, let the pacing mechanic gate card draws.  It will help keep the feel of the original game, with the cards just adding the flavor of what the specific effects of insanity are when someone finally does go mad.

So, you can hook into these systems by starting with a low point insanity or some draws.  Since draws dilute the effects a bit (players may play multiple Tells and thus keep the severity down), I might go a little higher.  Eg, if you have minor and major disadvantages, you could map those to 1 and 3 point insanities, or 2 and 5 card draws respectively.

For a potential advantage, see the next item – hand size.

Hand Size – Some games have systems where characters are innately more or less sane than others.  Eg, in Call of Cthulhu a character with a starting sanity of 40 is in more danger of losing it than a character with a starting sanity of 75.  You can reflect this by giving more sane characters a larger hand size.  The default rules dictate that everyone starts with 2 cards, and then once you start drawing you have to always play down to 2.  You could give certain characters a 3 or 4 card hand size.  They still start with 2 cards in their hand, but they only have to play down to their larger hand size.

This has two effects – first, the player gets a little extra buffer of sanity.  The first one or two draws result in no cards played.  Second, they will have more cards to choose from when playing, so are more likely to spread out multiple Tells and thus remain more sane during play.  Feel free to experiment with this, but I recommend small changes here.  A one card hand size increase can make a significant difference.

Limiting Tells – Another tuning you can try is limiting how many total Tells a player can play.  By default you can play all 6, but you could limit this down by a few — I wouldn’t recommend any lower than 3.  You can use this across the board, or you can do it on specific events.  Eg, if something truly horrific happens and you want players to really feel the effects, disallow Tells for that round.  The net result will be that players will be unable to absorb the damage with new Tells and are more likely to start behaving erratically as they descend rapidly into the insanities they already have in play.

Recovery – The default rules include no method of recovery.  However, many games have systems for restoring your sanity.  This is pretty easy to reflect with the cards — any recovery system should allow players to discard cards in play.  Thus if I am suffering level 3 Anger and am healed for 1 point, I can discard one of the descents and go down to level 2 Anger.  Maybe this healing will eventually even let me discard the Tell.

I hope that helps you figure out how to adapt the cards to your preferred system.  I of course would love to hear how any efforts go, or any new ideas anyone comes up with at the table.  Please get in touch and share your findings!