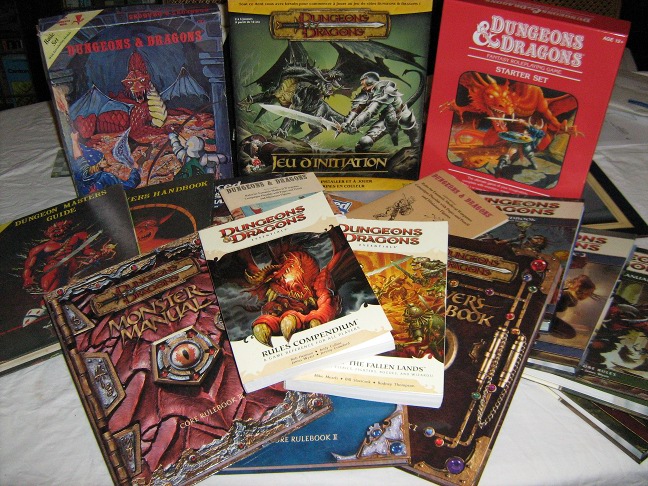 So this article went around recently with the headline “Dungeon & Dragons’ revival helped by simpler rules, storytelling“.  Now, I feel like I’ve heard this refrain before.  It seems every couple of months some publication is writing about the amazing resurgence of D&D.  Unfortunately there’s rarely any data to back up this idea, so it’s a little hard to comment on.

That said, this article struck me in its claim that the simplification of the system was part of its method of reclaiming popularity.  Sure, the author does begin by crediting pop culture references, and I don’t think anyone can deny that if there is a renewed interest it might have at least a little bit to do with Stranger Things.  However, the article then goes on to say:

Competition from video games and rules that grew more complex with each new edition prompted its popularity to level off in the 1990s and 2000s.

But in 2014, Mearls and his team decided to strip away the layers of rules and return the game to its core: allowing players to take the game in whatever direction their imaginations led them.

I find this really fascinating, and a little strangely coincidental, as no more than a week ago I was searching my own blog archives to try and remember what Mearls had said about complexity in D&D before 5th edition came out.  I dug up this post I wrote back in 2011.  Unfortunately the Mearls blog post I was reacting to has vanished, but at least I seem to have had the foresight to record the poll results in my own post, and of course, the internet forgets nothing.  Re-reading Mearls’ old blog post, what really jumps out at me is this footnote regarding AD&D vs. D&D:

Back in the late 1970s and early 1980s, D&D was divided into two basic lines. On one side, there was Advanced Dungeons & Dragons with its hardcover rulebooks and more complex rules. Basic D&D was aimed at new players, though its simplicity, clear rules, and concise presentation have kept it a favorite for decades. Where AD&D tried to provide rules depth and complexity, Basic D&D relied more on an individual DM’s judgment and rulings to keep things moving. Of course, the Rules Cyclopedia introduced a level of complexity to Basic D&D that neared AD&D’s, but the basic sentiment remains the same.

4th Edition, and 3rd Edition before it, take their cues from the AD&D branch of the D&D family tree.

In retrospect it’s clear this series of blog posts were leading up to the release of 5th edition.  My own blog post in March of 2011 predates the official announcement by less than a year.  However, I don’t think at the time I recognized the line the above footnote draws between depth and flexibility, or that it could be an indicator that 5th might go the other direction from 4th, or try to find a middle ground.

Back then after reading the second blog post in the series I gave on Mearls, and perhaps missed the third one, where Mearls sums it up thus:

At the end of the day, to me the polls show that we have a fairly diverse audience that wants a wide range of experience out of Dungeons & Dragons. Whether discussing our publishing schedule, the game’s complexity, or its use of miniatures, we see a fairly broad distribution of opinions. There are clusters, but so far we haven’t seen a poll that saw one option (or set of related options) overcome the gnome effect.

The gnome effect Mearls is referring here to is the idea that even if gnomes are only popular in 10% of the audience, that still means with an average of 5 players per group you’ll have one gnome in every other D&D game.  Thus by cutting the gnome you disrupted half the D&D games in existence.  Very rough math, but he has a point.

Ultimately, I think what Mearls was doing here is the same thing I do with my own blog – airing his thoughts to try and help crystalize them, and perhaps begin a dialog with his readers to contribute new ideas.  And I don’t begrudge Mearls the dilemma he was trying to work out – how do you produce a new version of a game that pleases its very wide range of fans?  At this point the community was so fragmented, it was probably pretty daunting.

I have to give him credit – from what I hear 5th edition is a pretty good game.  It certainly seems to be a pretty popular choice at conventions these days.  I played it once, and it’s not for me personally.  For me 5th edition still goes too far in the direction of depth/complexity at the cost of some of the flexibility I enjoy.  I recognize though that my tastes are on a far side of a spectrum of valid opinions, and I’d never say it’s not a good game because it doesn’t suit what I want out of my D&D.

For my own games, I will continue to run the system I prefer, and as DM that’s totally my prerogative to do so.  I think many players recognize that the best system is the one the DM is excited to run, so in a sense, it kind of doesn’t matter which one I choose.  For the kids who are just getting into it today though, I’m glad there are books on the store shelves that had this much care and thought put into them.

5 thoughts on “Complexity in 5e”