Any profits I may have made on Insanity Cards have immediately been consumed by other stuff I found on The Game Crafter.  I guess kudos to them for making more than just a POD delivery machine, and really sparking a community of enthusiasts.  Here’s what I bought:

Axebane’s Deck of Many Dungeons 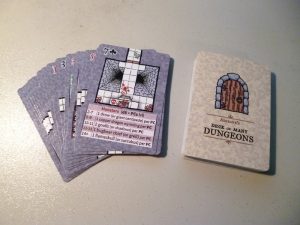 Also available digitally, I found this deck when trying to research similar products to Insanity Cards – specifically card-based RPG add-ons.  This is a deck of cards that is basically like a set of geomorphs, and you know I love geomorphs.

Besides just geomorphs with nice art, there’s some great add-ons here.  Every card also has some kind of table on it, be it a table of what kind of monster is here, or what happens if you drink from magic pool, or just what weird sounds are coming from down the hall.  Also, the deck includes book-end cards — specifically four cards that you’re supposed to start with and include a random quest hook table, and then an goal card you’re supposed to sub in at the end that contains the resolution to the quest.  And in case all that wasn’t enough, every card has a number and suit in the corner, so yeah, it can be used as a standard deck of playing cards too.

I toyed with it a little, and was happy to see that it doesn’t really take that many cards to produce an interesting, fully enclosed dungeon level.  I was worried the cards would sprawl out and take over my whole table, but there are enough dead-ends that after maybe a dozen or so cards I had fleshed out an entire level, and it easily fit on the space my coffee table provided.

My only gripe is the mechanic for adding in the goal room – after playing enough cards to completely enclose the level, your’e supposed to swap one for the goal room.  This is fine if you’re using this as a tool to create a dungeon ahead of time, but if you were trying to use this to generate a dungeon on the fly while playing I think that would be a little unsatisfying.  Of course, I’ve never pulled off that kind of play.  It’s attractive to think I could sit down with a rulebook, this deck, and a bunch of players and pull a D&D session off totally improvised.  The truth is that with the amount of effort it takes to gather players together to play a game of D&D, by the time they showed up I’d surely have discovered something more planned I wanted to run instead.

Still, it’s a really neat little product, the art is very attractive, and I’m happy with the purchase.  I’m kind of tickled too by the idea of pulling it out to play a random game of gin.  Then again, if I’m in a room with enough people who want to play a game, why on earth would we choose gin?

This House is Haunted 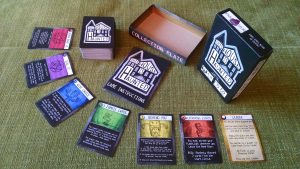 I found this one while mucking with my listing for Insanity Cards and noticing that the genre Horror was a link, so I clicked it to see what other games are in that genre.  There are fair number of gothic art themed tarot decks, and zombie games, but this one’s text began with “Use your own home as the game board…” and I had to check it out.  Actually, so far I’ve only ordered it, it has not arrived yet.  But based on the description and this video review I watched, it sounds amazing.

It seems the general idea is that it’s a bluffing game – some players are normal humans and some are demons, and you’re playing cards into a communal pool to push one team towards winning without giving away which team you’re on.  It’s not clear to me if it’s possible to start off as a demon, or if you only become one through play.  But, the bluff mechanic is just an interesting wrinkle to the really interesting part of the game – you play through the entire house with all the lights turned off and each player is given a flashlight to grope about with in the dark. 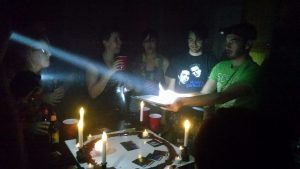 The reviews try to be cagey about the actual cards, because apparently like Cards Against Humanity, the game is less fun once you’ve experienced all the cards.  I know that’s a downside to CAH, but on the other hand, it’s allowed them to continue to print new cards and basically create a constant revenue stream, so in business terms it seems pretty brilliant.  That said I love the immersive quality of a horror game played in the dark throughout a whole house, and I love that the reviewer calls it “more of an experience than a game”, and I love that it not only supports but is apparently best when played by large groups — up to 8, or 12 with the expansion.

Once the thing shows up and I find a good opportunity to play it (which may take some extra time), I’ll post more.  Ultimately I’m a little sad the game caps out at 12.  I have visions of playing this thing at HelgaCon, with a giant house of 25 people all groping about in the dark.  That sounds pretty freaking cool.