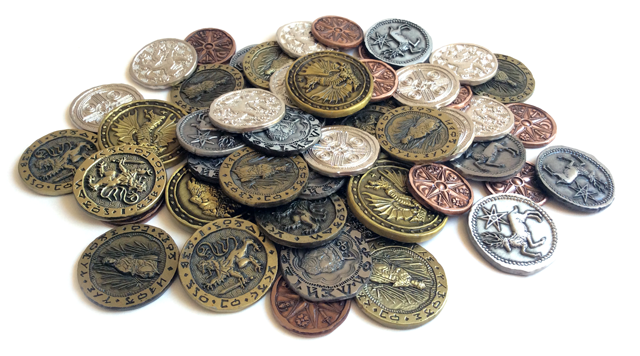 As I’ve been reading The Enemy Within and listening to the podcast, it struck me that the scale of cash values, be it treasure rewarded or costs of common goods and services, may have changed between editions.  In fact, I was pretty certain the values were not lining up, and I realized before I started running this game I had better do a closer analysis.  So, finally, one day before game night I sat down and made myself a quick spreadsheet.

The edition I’m most used to, and the one the players of the podcast are using, is 2nd edition.  The books I have were all written for 1st edition, and of course I intend to run 4th edition.  Fortunately all three editions use the same system of money – gold crowns, silver shillings, and brass pence – with the delightfully historic ratios of 12 pence to the schilling and 20 schillings to the crown.  In theory, all I had to do was find a common item and compare the values.  Unfortunately, it’s not quite that straight forward since in addition to scaling the entire economy between editions, it’s also likely that certain specific items may have been tuned to be more or less expensive relative to everything else.  So to get a good comparison, I’d need a larger sample set than just a single item.

I decided to pick items from a few broad categories – weapons, armor, food, transport, etc.  In many cases the items were listed exactly the same, while in others I had to do a little translation.  Here’s what I came up with: 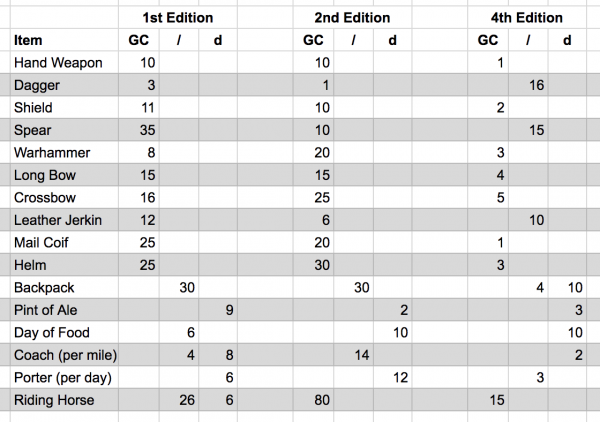 I started with weapons, the most obvious being Hand Weapon, an abstraction Warhammer makes over all single-handed weapons which I was surprised to discover didn’t exist until 2nd edition.  To give that one a number for first edition I had to take an average of a few other items (mace, sword, axe, etc.) I added warhammer to the list, because, well obviously.  In this case I think it was 2nd edition that did not have a specific entry so I went with the abstract “great weapon” which is meant for any large two handed weapon.  The only other thing that I think required a little interpretation was deciding that a “porter” and a “servant” were close enough.

So how do the prices compare?  The next step was to boil everything down to a single value (pence) and the create a ratio value between editions for each item.  That looks like this: 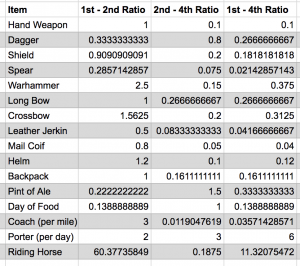 I calculated the ratios between each edition, plus the overall ratio between 1st and 4th, as that final value I think will be most pertinent to running The Enemy Within using 4th edition rules.  Here we can see the obvious outliers starting to show up, and I’ve intentionally moved those rows down to the bottom.  The price of a servant has clearly been adjusted counter to the balancing of the economy as a whole in each edition.  The price of a riding horse also jumps out as having bounced around quite a bit.  In fact, these values were so off I had to exclude them when I started graphing the data as they kept blowing out the scale.  So, minus those last two rows, here’s a chart of the above data: 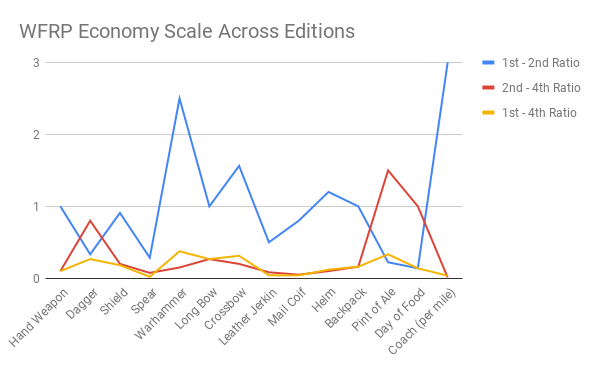 The most obvious thing here is a clear depression of the overall economy in 4th edition.  On average it looks like a drop to about 20% of the price originally in 1st edition, or 4 schillings to the crown and 2 pennies to the schilling (the latter rounded down from 2.4).  As I’ll be generally translating from 1st edition content to 4th on the fly, being able to do a very simple multiplication and the shift the denomination down is probably the easiest method.  I think i should be able to work with that.