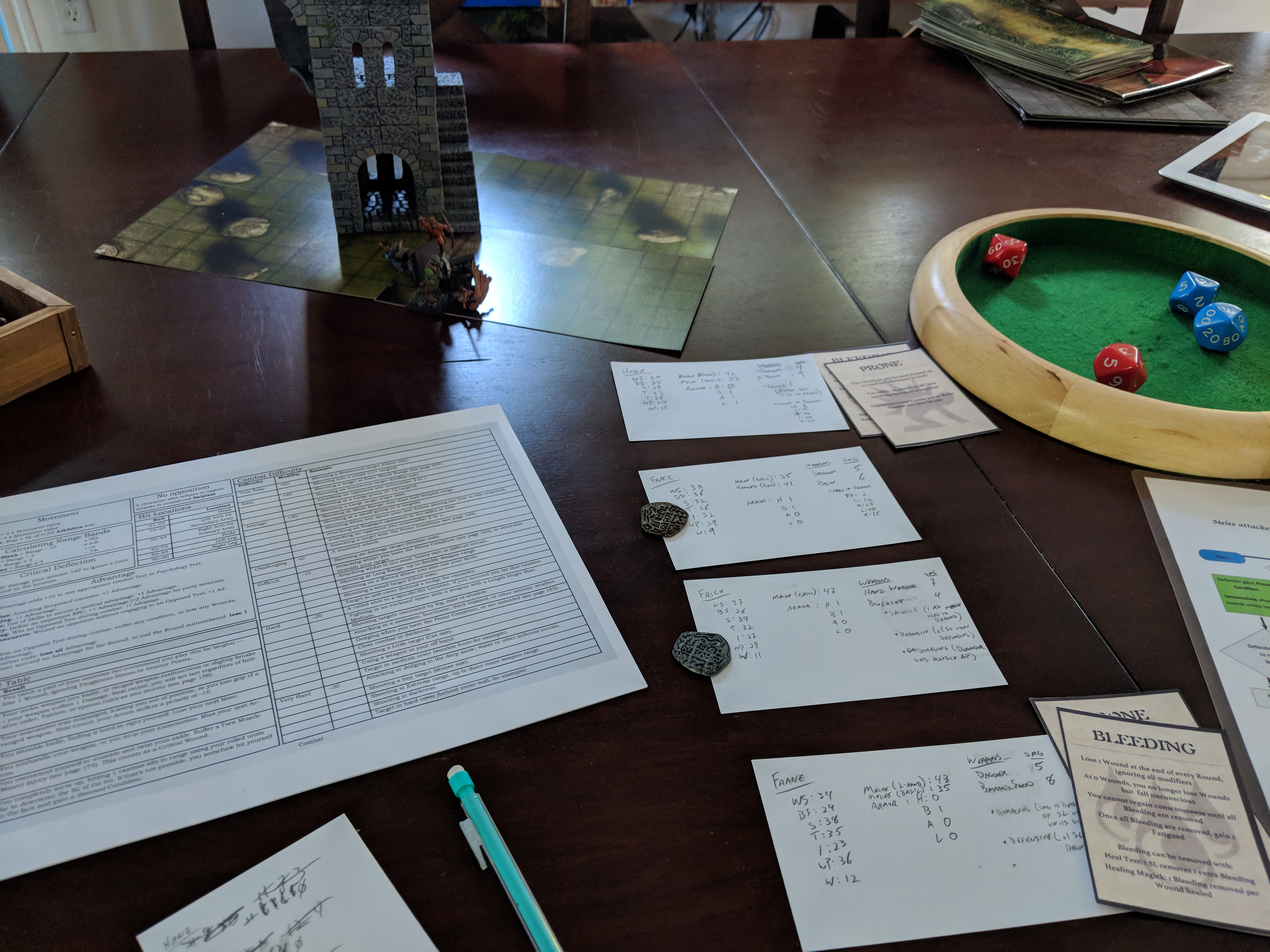 Last night we had our first full session of Warhammer and it was brilliant.  The players managed to strike some shady deals and then royally screw the local populace before ditching town.  There were a lot of laughs and it was exactly the kind of free-wheeling game I want out of Warhammer.  That said, I think I really blundered my way through the couple combats we had and so today I decided to really dig into the rules and figure them out.

In our game last night the two combats we had were both pretty brief, and two things were gnawing at me afterwards.  The first was that I was clearly not getting what they did to critical hits, and the second was that I only barely remembered advantage at the very end and was probably not doing it right.  So I sat down today and statted out four quick characters for a little two-on-two fight: Hanz and Franz vs. Frick and Frack. 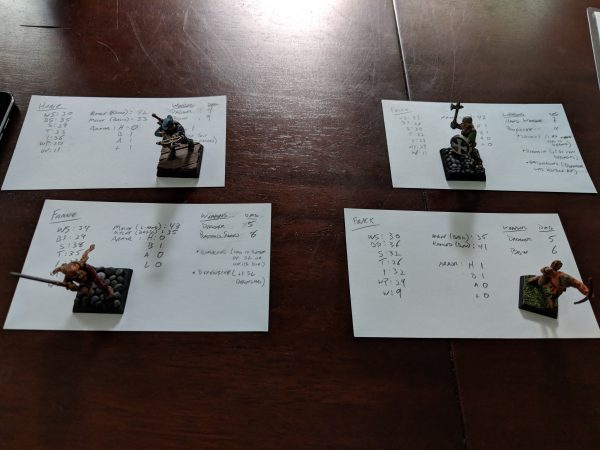 I rolled random stats for each as if I was creating new characters, but stuck to only rolling the characteristics that actually matter for combat.  I gave each 10 points to spend on combat related skills, and gave each one a dagger, an interesting weapon, and some light armor befitting their miniature.  Starting in the upper left and going counterclockwise, we have:

I learned quite a lot from the exercise.  The first big thing was figuring out criticals, or more to the point, how combatants are removed from the fight.  In 2nd edition it was all about the criticals.  Wounds were a buffer between you and the critical chart, but eventually you’d start taking crits until they killed you (or knocked you out).  This escalation is what I was anticipating seeing last night, but it turns out my head was too stuck in 2nd edition to appreciate how much it has changed in 4th.

In 4th edition, the criticals really are exceptional moments – representing either a lucky swing or the nasty wound that takes you out of combat.  The former happens when you roll doubles on your attack – you maybe get some extra damage and put an interesting wound on your enemy.  Sure, this might take them out if you roll really high on the chart, or it may just give them an annoying condition, like being stunned or taking bleeding damage for several rounds.

You do still automatically take a critical when you go below 0 Wounds, but also once you hit 0 or below you get an un-removable prone condition.  Basically you’re down and out of the combat at this point.  Maybe you also get a wound from that crit that kills or makes you start to bleed out, but you’re definitely not popping back up to fight again (unless you have resolve points to spend).  I saw one case of hitting exactly 0 in my tests and it was interesting to see a character get beat down without being mangled – something I’m not really used to in Warhammer.

The scenario I set up for the fights was two attacking a tower and two defending.  I alternated which team was defending the tower each fight, but the set up generally looked like this: 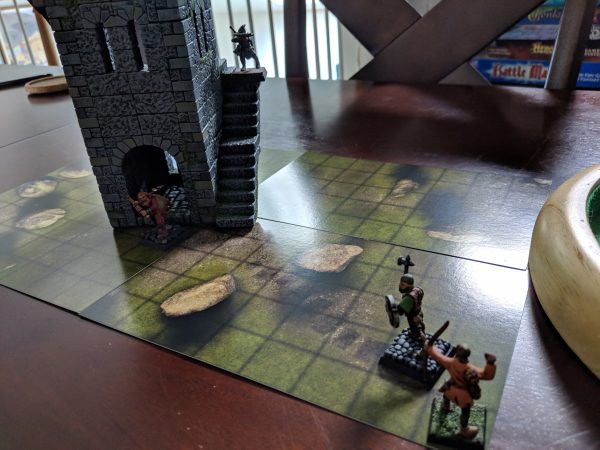 I didn’t use the terrain a ton, but it was a nice framing to have the defending bowman up in the tower and have to choose if/when to come down.  I had one really interesting moment when Hanz was up there trying (and failing) to reload his bow while Frack made his way up the stairs firing as he came.  Frack eventually knocked Hanz down from just a few feet away — Hanz was lying in a pool of blood clutching his broken kneecap, and Frack had to choose whether to spend the next round finishing him off, or rush down the stairs to join the melee between Franz and Frick.  While I was amused by the idea of finishing off Hanz by shoving him off the balcony, I decided it wasn’t worth the round and instead rushed down to join the fight, which very surprisingly Franz managed to turn and defeat both Frick and Frack.

It seems Warhammer 4th edition is really good at representing the difference between death and simply out of action.  It’s very likely for combatants to get knocked down and not be able to fight anymore, but not necessarily be dead.  This strikes me as really good for keeping the fight exciting and a bit gory, while not making it such that the party is in constant fear of TPK.  It took a few fights for me to see it, but now I kind of dig it.

I also got to see advantage up close and personal.  I had a couple fights strongly impacted by advantage, but I also saw cases where I was sure the guy with 3 points of advantage was going to win the day only to have a crappy roll rob him of his advantage and then the fight suddenly swung in the other direction.  It was actually really satisfying and always entertaining.  In fact, I’d say the overall theme here was that I was surprised just how entertained I was playing a 2v2 fight all by myself.

I did find one unusual hiccup – what to do when there’s a tie in melee combat.  As every melee attack is an opposed test, you could refer back to the general rules on opposed tests, which say that the GM can choose for it to either be an impasse or can resolve the tie by looking at the raw skill values of the two competing characters.  By the latter option, I should give the tie to whoever has the greater melee skill.  However, I did find that over on the Facebook group someone was quoting the book in the combat section saying:

If it’s a tie, the attack misses but no-one gains any Advantage.

At first I couldn’t find this, and then I realized it was because I was looking at the final PDF and this comment was a bit old.  I went back to the preview PDF and sure enough the above line is there.  Why was it removed from the final PDF?  Does that mean it should go the other way, or were they trying to leave it up to the GM to pick?  I eventually decided to go with the preview rule on this one as being slightly more interesting and a bit less fiddly.

Other observations – the crossbow vs. bow was awesome.  The crossbow regularly had massive hits interspersed with panicked attempts to reload quickly, while the bow allowed for a steady stream of medium level damage.  In that first game when Frack decided to spare Hanz, Hanz opened the combat with a bolt that very nearly killed Frack, then had several rounds of desperately trying to reload the damn thing while Frack slowly closed and peppered him with arrows.  I also learned the real value of cover — after a couple nasty hits with the crossbow Frick and Frack learned to modify their movement to always end behind a rock or corner of the building for the much needed -20 cover bonus.

All in all I have to say that now that I’ve had some practice with it I’m inclined to really like the new combat system.  I’m really looking forward to introducing the group to more of it at our next session.