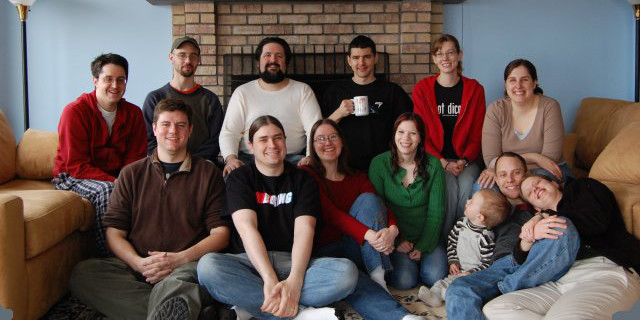 My news feed recently served up this blog post entitled Run Your Own Damn Convention! I’m actually really glad to see some evidence that I’m not the only lunatic doing this. For 12 years now I’ve been running something called HelgaCon, a little gathering of around 24 friends for a weekend of gaming, whose name is a ridiculous inside joke that only a few of us still recognize. You can find reports from attendees Delta and BJ on their respective blogs. And yes, that picture above is the original group who started down this trail with me, and most of whom still attend 12 years later.

I get an inordinate amount of praise from everyone for running this thing. Perhaps they think I am being demure when I say I do it entirely for selfish reasons and it’s really not that much work, but both are completely true. One thing you’ll hear from larger convention organizers is that they don’t really get to enjoy their own convention. Not so for a small house convention like this. Sure, I can’t be everywhere at once so I naturally miss some games, but I play as many as anyone else. And yes I do have to do some up front leg work every year, but it’s mostly just sending out email reminders as after 12 years the process is pretty well established and self-executing. I have a lot of help from some wonderful volunteers so the actual work per person is pretty minimal.

Also, I have a secret weapon — some software I wrote to do all the logistics around scheduling games. The first year I ran this we lost the entire first night to figuring out what to play and when. I decided the following year that this was unacceptable and started working on a process to do all the game planning up front so we could get to playing right away. Bit by bit I’ve been automating that process with software, and today the whole thing is now run through a website I created.

I’ve already written about the fancy AI algorithm that does the heavy lifting, but I’ve also built a fair amount of scaffolding around this to create a site where GMs submit their games, players pick what they want to play, and the whole thing runs pretty darn smoothly with just a couple button clicks. The last big feature I’d like to add is the collection of money. I’m not out to make a profit, but the whole thing is really only possible by distributing the cost amongst the attendees. I charge $100 per person, and that covers not only the cost of the house we rent, but also all the food for the entire weekend. When you think about it, $100 for all inclusive weekend away is actually an incredible deal.

So why am I bringing all this up? Because as Jarad posted, I wanted to encourage you to do it too, and I’m here to offer some help. As a side project I’ve been working on transforming the software I wrote into something usable by more people than just me. It’s still missing some important features, and probably still has some rough edges as it’s had just the one user for a while now, so I’d consider it in early beta mode. But it is now at that point where what I really need is a couple brave early adopters to try and use it and help me find the remaining weak points.

I’m not posting a URL publicly quite yet, as I’m not ready for a ton of users, but if you currently run or would like to run a house convention, and would be willing to be an early beta tester of this software, please drop me a line. I will work with you to show you how to use it, and help you troubleshoot any problems that arise along the way. Hopefully a handful of early users will help me shake out any remaining issues and then I’ll be ready to share the site with the world.