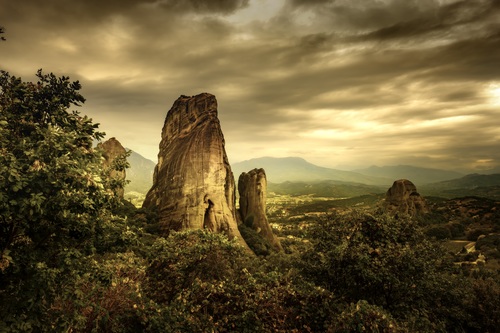 I am now 4 sessions in to my West Marches campaign. A couple of those games had rocky starts, with the invite list growing and shrinking just moments before it started. Each game was a totally different group pursuing a totally different goal. I was feeling like I had run 20% of an adventure four times in a row, and was worried that nobody was really engaging in the background and was just joining in to get a chance to play. I thought maybe this thing just wasn’t going to get off the ground. But then magic happened.

Let me break off a moment here and say that if you’re in the campaign and reading this, there are SPOILERS AHEAD. Please turn back, or at least be so good as to pretend you didn’t read this and keep any secrets I reveal to yourself.

Reading the above disclaimer you might think I have a crazy master plan, with secret plots and twists and turns to reveal. In fact, I have very little. I’m engaging in one of my favorite ways to run a campaign – just in time. I’m keeping my ears open to what the players say, and trying to incorporate their interests and their ideas into the game as we go. This is why having players not engage is so deadly. If they don’t pick up on any leads and start digging into the background of any of the weird stuff they have found so far, this game is going to go nowhere fast.

We have a slack channel with everyone in the group in it. Actually more than that, there’s like 24 people in there, so some casual observers as well as real players. We also have a wiki page where I posted a map and some initial rumors / hooks to get them on their way. I strongly encouraged the players to take ownership of the wiki. Modify the map with what you have, trade stories of what happened to you, catalog your discoveries, etc. After four games I had exactly one play report, and little confidence that many of the other players had even read it. Then today one player added some notes from an earlier session, and did some cross-linking between the rumors page and the two existing session reports. Then she posted this:

Anyone else suspicious and freaked the hell out that
1. There’s a spooky hole in the roots of a dryad that leads underground where there’s an evil dude
2. There’s a staircase leading downward into the earth nearby that dryad
3. Back by Cumry, there’s a series of caves that begins in a hollowed out tree where there’s goblins

Is there some kind of Big Evil under everything?
Forsooth, for one, I am scared.

That’s it, that started a chain of discussion and conjecture. Another player mentioned a kobold cave they had discovered (this was from a session for which there is no report yet), and how it weirdly had subterranian rooms that were clearly not built by or for kobolds. Another pointed out how many of these weird places were often carved into the side of a mountain or tall hill rather than directly under flat ground. The conjecture train has finally started rolling!

Why am I so excited about this? Well, honestly, I had never considered that maybe these underground structures might be connected. I whipped up a couple locations to be inhabited by your bog-standard first level fodder: goblins, kobolds, etc. As is my habit I used pre-existing maps, and I suppose I probably had the old “there was once an ancient civilization here” motif in my head. But I didn’t overthink where things were placed or how or if they might be connected. Until, that is, the above post.

My frist reaction is wow, is there some kind of crazy Stranger Things-esque upsidedown realm connecting these places? Does that mean there’s also some unknown horror that lives there, and perhaps wants to lure unsuspecting people into its realm, or possibly even escape into the real world some day? That sounds pretty awesome actually, so yes, you bet your ass that exists in the world now. I will definitely be incorporating that into existing and future locations.

What will my players accidentally invent next? I can’t wait to find out!