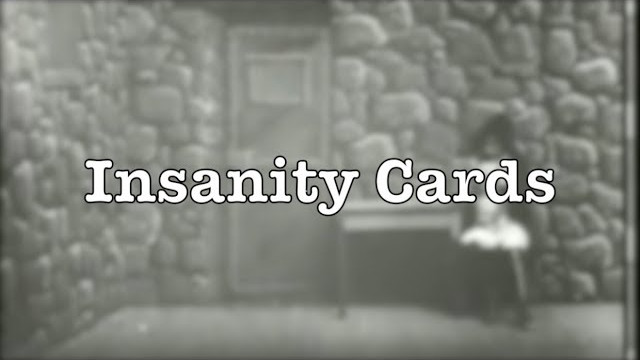 Well, it looks like the Sanity Test of my Insanity Cards has finally completed.  I think the page showing the results of the test are publicly accessible, so feel free to check them out here.

I was super excited to see the results show up.  I had just sent a ticket in that morning asking when it would complete.  Game Crafter’s FAQ says it should take “14 days or less; usually in just a few days.”  I submitted my game for testing on 12/16, and got the results on 1/2 — a little longer than expected but given that it overlapped the holidays I think well within reason.

I scored an 80, and you need a minimum of a 70 to create a crowd sale, so really I’m good and can move on to the next step.  Still, I paid $30 for the test so I figured I really should consider some fixes based on the feedback.  Most of involved minor edits to the rule book or store listing, so those were easy enough.  The big piece of feedback was a recommendation to include a dramatic story.  My reviewer recommended to “start with a little story based on an RPG, then translate it into the mechanics of the cards.”  So, I wrote this:

Anna stared in horror as the demon lunged its greasy black claws towards Detective Aames. Its joints clicked as its spindly arms unfolded, and the long, serrated nails sank into the detective’s exposed neck. Aames jerked the trigger of the shotgun he held level at the creature’s disgusting, bloated belly and it exploded in a shower of thick black blood. The creature’s body, hurled back into the corner of the room, sunk limply to the floor, a curl of dark smoke rising from the gaping hole in its torso. Aames’ body too dropped heavily to the floor, his head falling from his neatly decapitated body. It bounced twice, then rolled to a stop at Anna’s feet.

“I don’t think that went very well,” the head said.

“You do what?” Jerry asked, looking up from his “Detective Aames” character sheet, where he had just finished crossing out all the wound boxes.

“I pick up the severed head,” said Tracey, “and I say to it ‘No, I don’t think that went very well at all.’ Then I walk calmly out of the room.”

“Are you crazy?” asked Jerry.

“Yeah,” Tracey replied, “look — the GM said I had to take two more points of insanity damage. That bumps my Delusions up to level three. It says here that a person from my past that has no earthly business here appears and I have conversations with them. His severed head fits the bill, right?” she asked, looking up at the GM. The GM smiled and nodded from behind his screen.

“Why would you do that?” asked Jerry. “Look at all these cards you could still play as tells. You know you don’t have to sink them all into delusions right away, right?”

“Sure, but there’s only thirty minutes left in the game,” said Tracey. “I thought it would be more fun to end the night talking to your severed head.”

Jerry looked at his watch. She was right. “Can I spend the last thirty minutes playing the voice of the delusional severed head?” he asked.

“That would be hilarious,” added Tracey.

All eyes at the table turned to the GM. He looked around at all the grinning faces. “Yeah,” he said, “I’m cool with that.”

I’ve added that to the store listing, but decided not to included it in the rulebook itself.  That would increase my booklet page count by 33% and further increase the cost of the cards.  I’d rather keep the price down as much as possible.

So the next step is to apply for the crowd sale.  I filled in the form, made a custom ad in the format they requested, and then was surprised to see they would not let me submit for a crowd sale without a video.  Sigh.  The last thing I want to do is sit down and record a corny video of me explaining how to use the cards.  And I certainly don’t have the skills or budget to make anything remotely professional looking.  So, I turned to my old friend publicdomainreview.org to see what I could scrap together.  Here’s what I came up with:

Well, not great, but an hour with iMovie is about all I’m willing to spend on this.  I’m hoping Game Crafter thinks it’s amusing and lets me run with it.  Otherwise, more delays as I spend time this weekend recording a dorky video.  Sigh.

Stay tuned, I’m hoping to have the crowd sale up and running just as quickly as Game Crafter can make it happen.