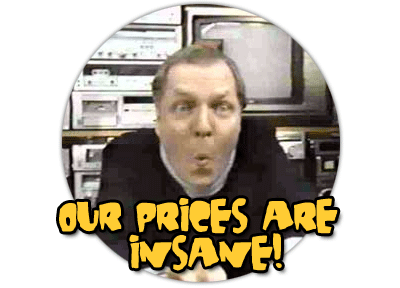 Well, we did it, the Insanity Cards crowd sale is over!  Over the course of the week we sold 44 copies, which gave all 44 purchasers a nice 25% off discount.  Fear not, if you missed it, you can still purchase a copy here.  For those who did purchase, please be aware that this is still a print on demand product and so it will take some time to produce and ship the final product.

Now that the sale is over and we’re waiting for the product to ship, I thought I’d take a minute to review some final thoughts and share some things I learned in this process.

So, while The Game Crafter did promote the product right on their front page, and post about it a couple times to their own Facebook feed, I do credit most of the sales to my own little guerrilla marketing campaign.  I planned a few blog posts over the course of the sale, which were cross posted to Facebook.  Then as we got closer to the end of the sale I started making some targeted reddit posts, which I suspect really drove the later sales.  I discovered these subreddits to interact with: 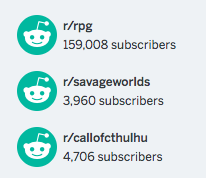 My first experiment, documented here, targeted the two smaller more specific groups with just a link and a blurb.  It got some attention, but I was still new to reddit and figuring stuff out.  Once we got closer to the end of the sale I decided to post to the much larger more general group and this time instead of just a link I posted a nice bit of text introducing myself and the project.  I tried to really engage the readers, making sure to follow up on any comments left and answer any questions.  Here are the results in terms of hits to my blog:

January 11th is when I first posted to /r/savageworlds and /r/cthulhu.  Two days later on the 13th I posted my general purpose link. Both bumps are very visible in the above chart.  I’ll also add that the preceding days were not low hit counts, you can see my average views for early January were pretty level, and typical of my blog for many months now.  The reddit bumps blew everything I had done to date out of the water.  Reddit itself also tracks some small number of stats.  For the post to /r/rpg it tells me I got 215 points (94% upvote) and 3.0k views.

I’m assuming this is an anomaly for my little corner of the internet because I was pushing on this sale, and that my hit count will recede back to usual levels.  But who knows, maybe I picked up some readers from reddit as a result of this.  And if so, welcome friends, I hope you enjoy what I have to say!

A few folks on reddit asked about a digital version.  Honestly, I have no idea how that would work, given that this product isn’t a ton of rules or text.  It works primarily by being an easy to interact with physical element in the game.  Now, maybe I can make some kind of printer-friendly version with the expectation that users print out their own cards and cut/glue them at home.  My gut says you’ll spend just as much money on ink and glue as you would send to The Game Crafter for the real thing, but I’m not against the idea.  Another user recommended I look into Roll20 marketplace, which is an interesting thought.  Frankly, the mark-up on a purely digital version would probably be way better than what I get from The Game Crafter, so I’ll definitely at least spend some time thinking this idea through.

I talked with some folks about a lot of different systems to use the cards with, and learned of some I had never used before.  I discovered there is in fact a Savage Worlds Cthulhu variant called Realms of Cthulhu, which I will check out.  Also Trail of Cthulhu sounds like an interesting system.  I may have to find someone running one or either of these at an upcoming convention so I get a chance to try them out.

What does the future hold for Insanity Cards?  Well, for the time being I’ll just let them sit on TGC and see how they do.  I may also spend a little time poking around about the digital stuff.  If anyone has any advice on that score I’d love to hear it.  I was also thinking of maybe eventually polishing up the horror adventures I’ve written to date and maybe publishing them on drivethrurpg or similar, though I’d have to come up with a nice system-agnostic way to present them.

That’s all got to wait though, because for the real immediate future I have to spend more of my RPG brain cycles on the upcoming conventions.  I’m scheduled to run a ton of stuff at TotalCon, which is now just six weeks away.  Then there’s GaryCon, HelgaCon, and Origins all in a row.  I really have to stop mucking about with these cards and get to work prepping my games!