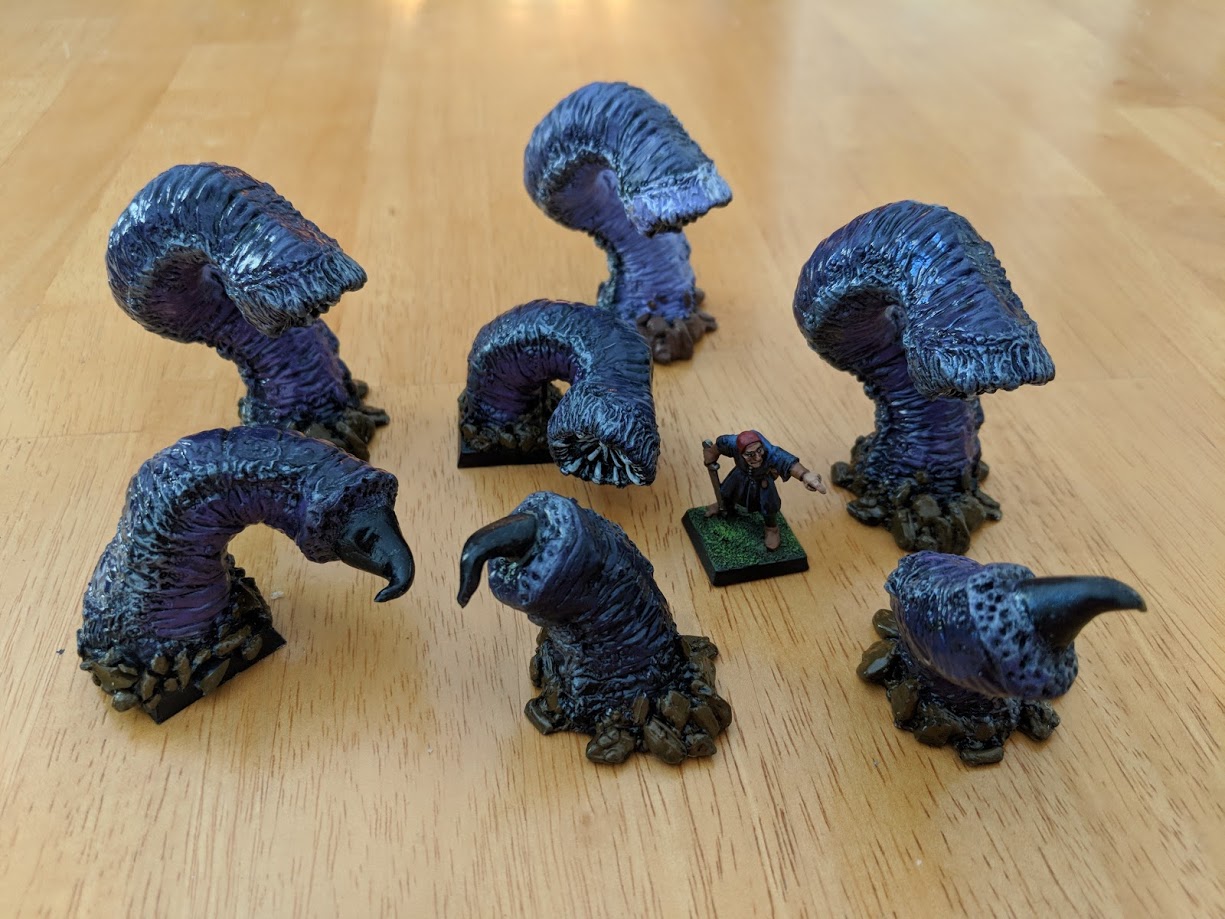 One of my Bossfight for Breakfast games this coming weekend at TotalCon will feature purple worms, and since I’m using minis I decided to dust off the brushes and make some purple worms.  I actually already had one, a pre-painted plastic from Reaper that sadly they don’t make anymore, otherwise I would have happily just bought more.  Actually, they sort of still make it, it’s just now sold unpainted as part of their bones line.

It also looks like they used to have a metal version that included a second piece with the barbed tail-end of the worm, which I rather like, though as a metal it was super expensive.  So I decided to see what hackery I could do with some of the current bones models since they’re so cheap.  I bought 4 copies, painted 2, and sawed the other two in half to construct some tail-end versions.  Here’s the final product (pre-painted one that I already owned is slightly lighter colored, in the back): 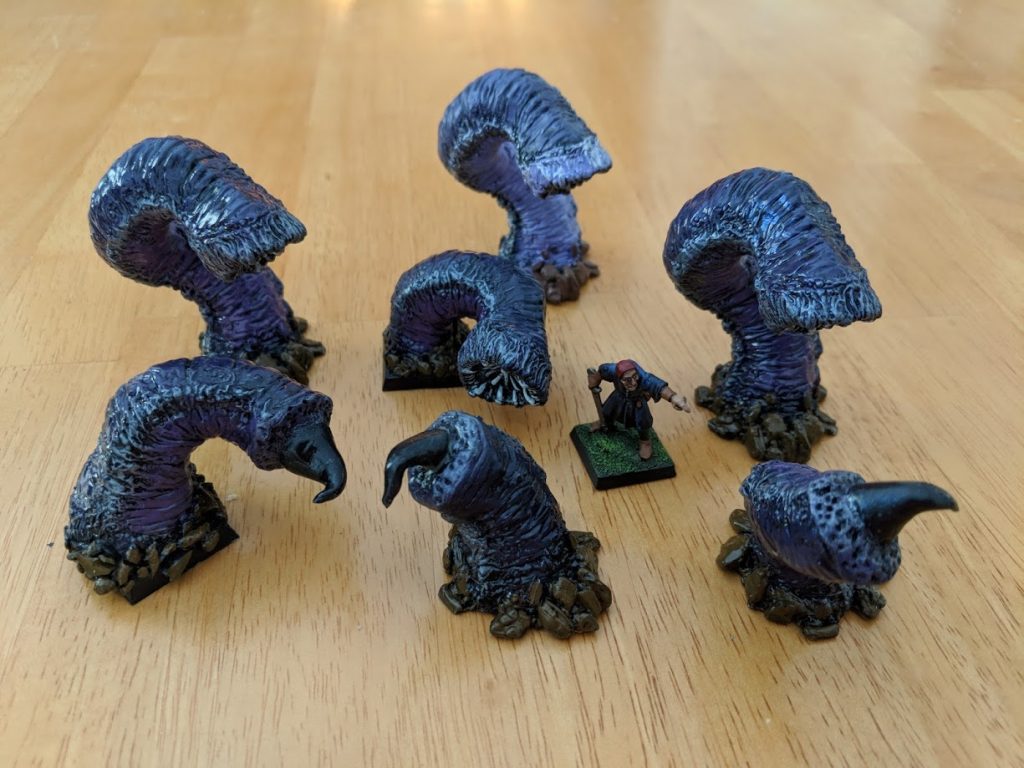 I used a little 2-part apoxie skupt to create a hooked barb at the chopped off ends for two of the tail pieces, and I mounted a head half to a base (center) so I’d have more heads than tails.  Unfortunately I wasn’t careful enough with this one and his center of gravity is off such that he tends to tip over.  Whoops.

The left-most tail piece is actually the head half of one of the chopped up worms, I just glued his open maw to a base and then glued some rocks around it to cover up that it was a head, and then again made a barb at the rough end out of apoxie.  Ultimately I’m pretty happy with them, though I think they are a bit small for what I imagine of a purple worm.  They could probably swallow that guy whole, but it would be a tight fit.

Actually this works well for the scenario I’m using them for where I interpret them as juvenile purple worms.  I cut their HD back a bit, and I rule that when they swallow they can’t get an entire man down, so I roll 50/50 to see if they swallow the legs half or the head half.  They need a second attack the following round to complete the swallow.  In my test run of this game it lead to a hilarious situation where a magic-user was half swallowed with his legs kicking out of the maw.  He blasted the inside with magic-missiles while a fighter downed a flying potion, grabbed his legs, and flew straight up.  A few good dice rolls and out popped the magic user and then the pair spent the next round or two awkwardly trying to find a landing place, while the magic-user hung upside-down over the battle shooting the occasional spell.

My favorite purple worm encounter though is in an adventure I wrote called “Gloomwood Falls”.  The party encounters the purple worm in this section of the dungeon: 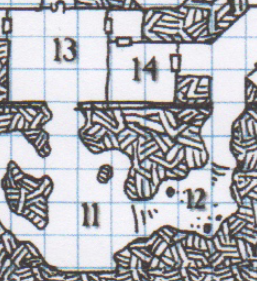 The purple worm attacks in room 12, emerging from the ceiling to come down at the party, fore-shadowed with some crumbling rocks and dirt raining down as they first come down the stairs.  In this case I’m using what I consider a “full sized” purple worm, which completely fills a 10′ corridor.  Its attack usually splits the party, some having made it down the stairs or even onto the stairs on the other side leading back up when it hits.  I sometimes end up drawing a quick side-view of this fight with party members on one stair or the other, or both, when the worm fills the cave and starts heading up one side, often with a party member already in its gullet.  The half of the party on the opposite stair feels only a brief sense of relief, until the discover they’re face to face with the barbed spike end of the beast.

Now, as you can see the dungeon does create a loop here, so we can get a really fun running fight going around that loop.  Except that room 14 is actually entirely a giant pit trap, with about a 1′ ledge around the edges.  It’s covered with a carpet, which has been affixed in place with little metal hooks that hold it taught giving the appearance of a solid floor, though any weight at all will drop party members into a 20′ pit filled with spikes.  Sometimes the party has discovered this before the purple worm fight, sometimes not, either way it does not help the poor sap trying to run around the loop to get to the other side of the worm.  I don’t think I’ve ever run this without a player attempting that maneuver, and it’s always very fun.

This encounter also lead to my all-time favorite purple worm escape, when I first ran it as part of my normal campaign.  It’s probably why I excerpted it into a convention game.  The worm had swallowed a magic-user, who had basically no chance of cutting his way out with his puny dagger.  So he up-ended his decanter of endless water, completely filling the inside of the worm with water.  Just as the water reached to his neck he cast a knock spell on the worm’s sphincter.  Out came the magic-user on a wave of water much to the surprise of the party members dealing with the poison spike.

As a young DM, I never actually used purple worms.  Maybe now I’m making up for lost time.  They’re quickly becoming one of my favorite monsters.