At HelgaCon, the question was posed “what was the shortest gap of time between releases of D&D?”  Now, that’s a somewhat hard question to answer given the various product lines, the minor revisions, re-releases, etc.  If you haven’t seen it, Nick Wedig made this excellent visual of the timeline of D&D editions.  (Note, this graphic was made prior to the release of 5th edition and thus does not include it.) 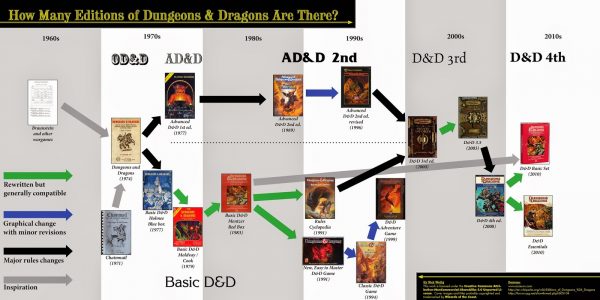 Now, as wonderful a visual that is, the sense of time elapsed between releases isn’t perfect.  It’s there a bit, you can see the biggish gap between 1st and 2nd edition AD&D, but generally the time between major versions is kind of hidden.  I wanted to see if I could make a visual that communicated the acceleration of major changes, which I think was generally indicated by slapping a new number on the game.  Thus, I made a quick spreadsheet listing only the numbered versions, plus original as a starting point (thus: 0, 1st, 2nd, 3rd, 3.5, and 5th) and graphed it.  Here’s what I came up with: 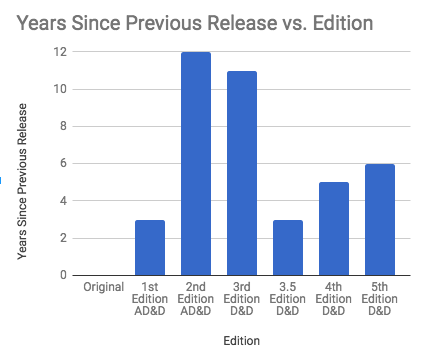 That’s OK, but what the bars represent is a bit off.  They’re not exactly showing lifetime of the given revision — for example, 3rd edition has the shortest lifespan before being replaced with 3.5, but in the above chart it looks like 3.5 has the smallest value.  Also, I thought visually the whole thing would work better as a single bar.  So I got out my image editor and came up with this:

Again, this is clearly a simplification given the exclusion of so many other incremental releases, but I do think the major number versions all actually did represent a large shift in the ruleset.  There’s an argument to be made that 3.5 is close enough to 3rd that they don’t deserve separate bars in this graphic.  I’d say that the fact that Wizard’s felt it deserved a new number is telling, even if it was just a half increment, and personally this is the edition where I got off the boat.  But if it bothers you it’s pretty easy with this visual to mentally adjust to see the yellow and orange as a single block, which actually then implies an increased acceleration of releases over time rather than a strange anomaly at 3rd edition and then leveling off.

Anyway, that’s my little contribution for the day.  Enjoy.

2 thoughts on “Time Between Editions”