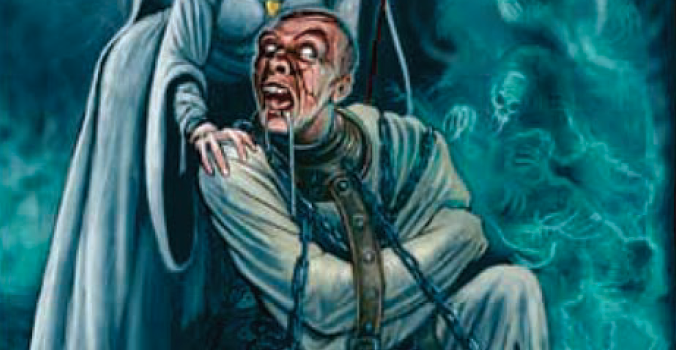 I’m embarrassed to say that it took me until last night to discover that Warhammer 4th Edition has removed insanity as a concept from the game.  OK, they kind of replaced it with mental corruption, but I’ll get into that in a minute.  For now I want to review how the insanity mechanic has changed across editions, and figure out how I want to play it in my upcoming 4th edition campaign.  So here we go…

As someone with a pretty strongly vested interest in RPG insanity mechanics, you’d think this is something I’d discover right away.  Last night I was reading Death on the Reik and got to a part that mentioned giving the players an insanity point.  I paused to go search the 4th edition PDF for insanity, and I was shocked to discover it wasn’t there at all.  The word only appears once in the entirety of the text, and that in some flavor text of a specific career.  This triggered some deeper research, as I know there are plenty of other places in The Enemy Within where insanity points are awarded, and I want to know how to adapt this to 4th edition before I start running the game.

The insanity rules for 1st and 2nd edition are pretty much the same (and apologies but I’ve not played enough 3rd edition to comment on that).  Various things trigger insanity points including taking critical hits, failing terror tests, or witnessing particularly horrific events.  The player records the points until they hit 6 total, then they must make a willpower test.  If they fail, the player loses 6 insanity points and gains an insanity, while if they succeed the player retains the 6 points and must test again when they gain their 7th point.  Corruption works pretty much the same — gain corruption points up to 6, then make a test or lose points and gain a mutation.

I bring up corruption because it appears that 4th edition simply rolled insanity into corruption.  Corruption points are still accrued and tests made when you hit a certain threshold – in this case they use endurance bonus plus willpower bonus, which on average is 6, but allows for a little variance based on characteristics and makes it such that as characters gain power they increase their resistance.  I find that to be a nice addition that I don’t think changes the balance very much.

Now, when you fail the test after hitting the threshold, the first thing you do is roll to see if you gain a physical corruption or a mental corruption.  This is pretty similar to mutations and insanities, and on the surface the simplification to a single pool of points is enticing.  That said I think the mental corruptions they list are pretty weak – a two word name that I guess the player can use to roleplay (eg. Worried Jitters or Hateful Impulses) and a penalty to some characteristic.  Also at first blush it looks like a very strong change to the balance, since now you only have a single pool of points to hit 6 before something bad happens, where in the past you had two pools and could conceptually still be free from mutations and insanities with up to 10 total points (5 corruption points and 5 insanity points).  On the other hand, they’ve also toned down what awards corruption points – it appears limited to direct contact with chaos (daemons, warpstone, etc.) and specific behaviors.  No more automatic points for taking critical hits or failing terror tests.

Back when we were playing 2nd edition, I do recall that gaining insanity points for every critical wound did feel a bit excessive, so I’m not too sad to see that go.  I guess points for failing terror tests doesn’t matter much given the encouragement to test for corruption any time the player has contact with anything chaos related.  That probably amounts to pretty much the same thing.  Still, I’m having trouble putting my finger on whether I think 4th edition is in total more or less severe.  Probably it’s highly contextual based on what kind of stuff is in the adventure, so I suppose I should stop worrying about the balance aspect.

So, what do I want to do?  I don’t think I want to play it as is, as I like the distinction between insanity and corruption, and I think the 4th edition insanities are quite unsatisfying.  Over on the Facebook group someone mentioned simply splitting the points apart for physical and mental corruption to bring it back in line with older editions, which I think would work just fine, but again I’m disappointed by the effects of insanity in 4th edition.  I could go back to the insanities listed in 1st or 2nd, but there’s one other obvious solution. Yup, time to break out the Insanity Cards.

Past me had some good points to make about using Insanity Cards in 2nd edition Warhammer, and it seems pretty straight forward – instead of points, use cards.  Yup, I think that will work just fine – I can keep corruption for physical corruption only, and then layer in insanity cards instead of mental corruption.  Now, I’ve never used Insanity Cards for a campaign, only for one-shots and convention games.  It strikes me that trying to maintain a hand of cards across many sessions might be a pain.  To that end, I’ve come up with the following alternative rule:

I think that should simulate having a hand of cards pretty well without the player having to maintain a hand across games.  That said, we will have to maintain the state of played cards across sessions.  I think this can be done by just creating a good notation system on the character sheet.  I’m thinking something like:

A player has played 1 Paranoia card (just a tell, no descents yet) and 3 Fear cards (1 tell and 2 descents).  They write on their character sheet:

I think that should work.  Players will then have to fish through the deck to reconstitute the state of affairs at the beginning of each session, or more likely when something comes up that the state of their cards matters.  I think that feels like a reasonable starting point.  I’ll post about how it works in practice after we’ve used it for a while.