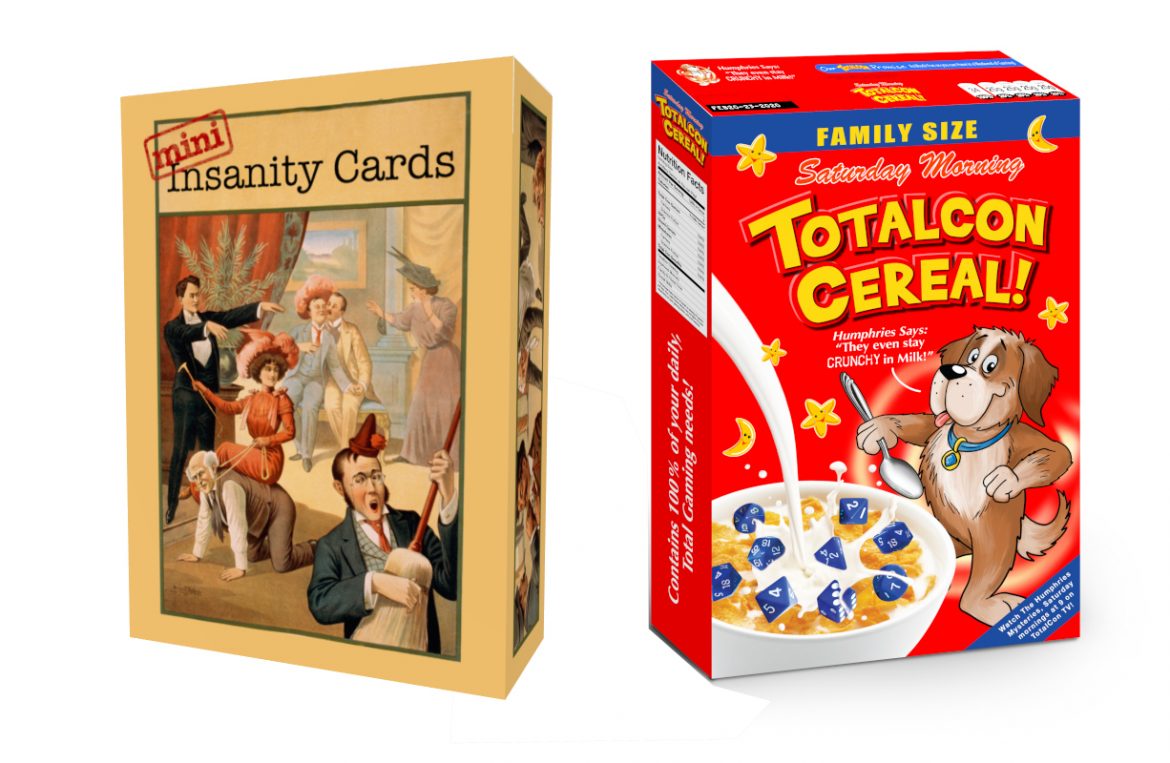 This year I promised myself I’d get my TotalCon games submitted well in advance of the deadline (unlike my snafu from last year). Also I’ve been doing a lot of work recently on Insanity Cards, and the two seem to have somewhat bled into each other. Combine that with the fact that I’m missing Carnage this year and am thus really jonesing for a con, I may have somewhat over-extended myself.

First, here’s a quick update on what’s going on with Insanity Cards. I’ve teased already that I’m working on a “mini” sized deck, and in fact those are totally ready to go. I could put them up for sale right now, but I thought it would be cool to also do a crowd sale similar to the one I did last year for the release of original Insanity Cards. For folks already psyched about the reduced cost of the mini deck ($16 vs. $25), the crowd sale could possibly get you a deck for as little as $10!

I submitted an application for a crowd sale and was accepted, but unfortunately there’s a bit of a line and my window isn’t until December 22-29th. Bad news for anyone hoping to get some in time for Christmas I’m afraid. But while we wait, I’ve decided to add one more version of the product – a print and play PDF. This will be available at DriveThruRPG around the same time, and includes images of both the original jumbo sized cards as well as the new mini poker sized cards.

This was a popular request when I first launched Insanity Cards. It appears to be a good option for folks playing games online or for our international friends for whom the shipping of the physical product is cost prohibitive. So for all those folks, I hope this fits the bill.

OK, that update wasn’t too short. What does this all have to do with TotalCon? Well, for one, ever since I made Insanity Cards I’ve been running a horror game on Thursday night at TotalCon using them. This game attracted a group of regulars, who last year got shut out due to folks with early access badges scooping up all the tickets. So this year, as usual I will be creating a new unique horror adventure to run on Thursday night, and I’ll also run it a second time on Friday night. Hopefully running it twice will meet the demand.

I’m also bringing my game Mazes and Monsters to run on Saturday afternoon, since it’s been a while since I ran that one, and it’s kind of fitting for the theme at TotalCon this year. I also wanted to run some OD&D games, and yesterday’s post about horror in D&D has inspired me to run a couple with Insanity Cards as a straight D&D horror game. So I’ve submitted two such games for Thursday and Friday afternoon — both will be adventures I’ve run before in hopes of making the prep easy.

And because I am a creature of habit, I have to run Bossfight for Breakfast, right? I mean, I love having something to do from 10-12 in the morning, as there’s no way I’m getting up for an 8 am game. So I’ve decided to run two of these Saturday and Sunday mornings. And that brings my total up to 7 games for 24 hours total of GMing at this year’s TotalCon, a new personal record. Of course they haven’t been accepted by the convention yet, and it’s possible they wont’ all be, or that the timing will be shifted, but I’m hopeful that since I submitted early all my stuff will get approved.

Of those 7 games, 5 will involve heavy use of Insanity Cards. I hope to have a few extra decks in my bag for sale on the spot should anyone decide they have to have a copy. So it’s shaping up to be a banner year for both GMing and Insanity Cards at TotalCon this year. Here’s hoping I survive it!